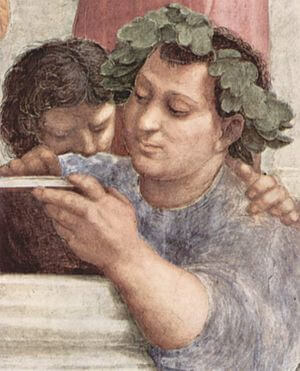 Epicurus has a bad rap, in that he is usually associated with excesses at table and bed. In fact, Epicurus believed that true happiness was bound to virtue and he kept a garden. He couldn’t have been all bad.

However, he approached the philosophical questions with blinders and as a result what he didn’t practice himself became associated with his name because it flowed from the same philosophical source.

In Gregory of Nyssa‘s Dialogue On the Soul and the Resurrection, Gregory is speaking with St. Macrinaabout her brother and his best friend, Basil the Great, who has just died. He is overwhelmed by grief and has come to seek her godly counsel, only to find that she is near death herself.

Nevertheless, she engages him over his anxieties.

“She gave in to me for a little while,” he says, “like a skilful driver, in the ungovernable violence of my grief; and then she tried to check me by speaking, and to correct with the curb of her reasoning the disorder of my soul.”

When he complains that he is commanded to believe that the soul lasts forever but is not given any reasons for it, she retorts, “Away with that pagan nonsense!… Observe this and nothing else; that such a view about the soul amounts to nothing less than the abandoning of virtue.”

What I find compelling about her answer is that she makes virtue ultimate. The fact that such a belief (that the soul is not eternal) would leave virtue abandoned is reason enough not to believe it.

How very different from the modern approach that is perfectly eager to accept teachings that remove the challenges of virtue.

Another way to say that is that modern thought is perfectly happy to destroy the human soul if their theories lead that way.

Over at Makrothumia, an amazing blog developed by Kimberly Jahn, you can find a post quoting Richard Weaver on the three ways humans have been degraded by conventional thinking. If you compare what is written there with what Macrina said above, I think you can begin to see the profundity of her insight in what at first may have appeared to be a mere reactive outcry.

In fact, it seems to have come from her “thumos” or what Lewis called the “chest” in his Abolition of Man. In Gregory’s dialogue, he takes the part of the pagan and Macrina of the Christian and they seek “where we may get a beginning for our discussion upon this point.”

Gregory argues that the soul either does not exist or else it exists in the elements of the body, thus presenting the view of the pop-neuro-scientist who writes for the popular science journals, like Scientific American Mind, Discover, National Geographic, etc.

Macrina’s response is long for a