Wisdom Through Writing (Part IX): On the Knowability of Truth 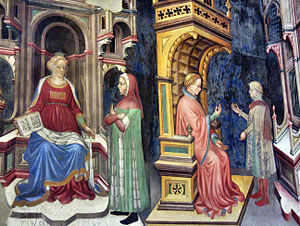 In “Wisdom Defined” (part two of this series) we provided three variations on a definition for wisdom, the third of which was “wisdom is the ability to perceive the nature of things so as to treat them appropriately.” We argued that “the powers of perception,” were the point, that “wisdom arises from seeing things as and for what they really are.”

Wisdom includes the knowledge of the nature of things and the ability to recognize the purpose of things. According to the tradition, when you are wise you know the nature and purpose of a thing, so you are able to treat it appropriately.

Maybe that is redundant. To treat something appropriately is to treat it according to its purpose and nature.

In the Christian classical tradition, developing our powers of perception and learning to perceive the nature and purpose of things becomes the heart and soul of an education that is ordered to wisdom.

I have to resist the temptation to distraction here, so I will simply point out that conventional education denies the knowability of truth, so it does not cultivate the tools needed to perceive it.

What I want to present in this post, however, is the idea that there are tools that have been discovered and developed by those who believe in knowable truth.

Socrates, Plato, and Aristotle in particular were convinced that knowledge of truth was possible, so they developed these tools so their students could eventually become philosophers.

So did Moses and Solomon.

Belief that reality is knowable is clearly a religious belief. It is both an act of faith and a commitment of common sense. Solomon pointed out that “The fear of God is the beginning of knowledge,” and rarely has this truth been more evident than today.

Because of its devotion to the word and to truth, the church has always been in the forefront of developing and applying tools of learning. Beginning with the fear of God, it has long followed Solomon’s counsel to “get wisdom, and with all your getting, get understanding.”

Because the church has always recognized the utter uniqueness of the Socratic lineage in its devotion to knowable truth (the Pre-Socratics and the Sophists did not, generally, believe in knowable truth because they believed, generally, that “the cosmos is all there is, all there ever was, and all there ever will be), she has found eminently useful for her stewardship of the cosmos the treasures of knowing that Socrates, Plato, and Aristotle discovered and refined.

She has been much more circumspect about the extremes of naturalism.

Among the tools of the Socratic tradition are the seven liberal arts, which were developed and codified between the time of Socrates (5th century BC) and Boethius (6th century AD).

The seven liberal arts can only be properly understood and fully realized if we remember that they were developed as tools of perception. In other words, the ancients discovered that by learning the seven liberal arts, they could better discover truth.

However, the philosophical inclination (love of wisdom) is always in conflict with the pragmatic inclination (love of power or of mere survival), so even in the liberal arts tradition there is a general tendency to forget what they are for and to use them for more limited ends, such as power, scientific research, showing off, and so on.

The short comings of human nature, however, in no way undermine the natural power of the tools themselves. The tools must be learned by those who love the truth, and all of us must learn to love the truth.

But love of the truth must be first, in priority if not chronological development. When true philosophy (love of wisdom) is first, all the rest follow in her train (see Proverbs 8).

The seven liberal arts include the verbal arts of grammar, logic, and rhetoric and the harmonic arts of arithmetic, geometry, music, and astronomy.

I insist again that the purpose behind the development of these arts was to better perceive reality. Perhaps this is obvious with arithmetic and geometry, which have enabled us to send satellites past Jupiter and Saturn by measuring within second-fractions the exact moment when the satellite would pass the planet and ride its gravitational forces on to the next planet.

Maybe it is less obvious with the verbal arts. Nevertheless, it remains true that grammar, logic, and rhetoric do enable us to better perceive the truth.

think without subjects and predicates.

Which is marvelous, because nothing can exist without subjects and predicates either. You cannot think about a dog without predicating something of it (predicate comes from the Latin for “say about”), and a dog cannot exist without something being predicated of it.

Thus our minds are finely calibrated to know reality according to its nature, which is to be full of things with qualities, quantities, relationships, and other things (predicates) that are true of them.

If, therefore, you love truth and want to know it, you will teach your students grammar. To fail to teach them grammar is to put a barrier between them and the world they live in. That is why grammar is the first brick in the wall of freedom.

Logic, in turn, is built on grammar, while grammar is ordered to logic and also submits to its principles. In fact, while Aristotle developed the first handbooks on logic, grammar handbooks were not developed until much later because grammar was seen as a part of logic. There’s a great deal of wisdom in that arrangement.

While grammar is built on the relation between subjects and predicates, formal logic is based on being itself, for in logic, everything turns on the principle of non-contradiction: something cannot BE and NOT BE something else at the same time and in the same way.

The role of rhetoric in this tradition is NOT to serve as a specialized subject. It is an ART. A-R-T, art; a LIBERAL art. An art needed to be free. An art without which we cannot be free.

It is not a subject. That is how the sophists would have taught it. As an art, it is a means to something else, and that something else is knowledge, and knowledge is always of the truth or it is not knowledge.

But if rhetoric is the art of persuasion, as Aristotle said, then how is it a means to knowledge?

In my next post on Wisdom Through Writing (November 24), I will explore this question, arguing that rhetoric is the capstone of the verbal arts, if not in dignity then in power. Rhetoric is the art that brings together the arts of grammar and logic and even the mathematical arts, thus bringing them to a fulness and a power of application that reveals their true glory. Then I will apply our discoveries to writing.

On a related matter, Leah Lutz and I will be presenting our Wisdom Through Writing workshops on December 4, Leah in California (near San Jose) and I in Charlotte, NC. We won’t spend quite so much time on the philosophical side of things, though we’ll touch on it. But we’ll focus on how to apply the truth that the truth is knowable in and through writing. In other words, we’ll teach you how to teach your students to write in such a way as to gain wisdom through writing. I hope you can attend at one of those two places.