The Human Element in Politics 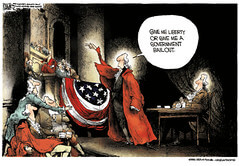 The law of unintended consequences has become a truism in political discussions over the last couple decades, but having become a cliche it no longer carries much compelling weight.

Clearly, something intervenes between the writing of the law and its enactment. What is that thing?

I would argue that “that thing” varies significantly from law to law, which is one of the reasons actual consequences are so hard to figure out. But one thing seems to be ubiquitous:

The direction in which energy moves.

A law is a means to coerce actions, and actions require energy.

Every time a law is passed, energy, usually vast amounts of energy, are directed toward adjusting to the law, sometimes to enjoy its benefits, sometimes to escape its consequences, sometimes to minimize its impact. This is perhaps most obviously true in tax law, than which there may be nothing that absorbs more of our national energy.

For a law to be effective, therefore, requires that the legislators have a sound awareness of how energy will be redirected after it is passed.

The normal way of discussing this concept is to speak of incentives. What incentives does a law provide for a person to act in a given way.

The mistake a legislator commonly makes here is to think that the incentives are of his providing. This is rarely so and when it is so the legislator is often putting in place degrading little manipulations to provide social or financial pressure to comply with an otherwise undesirable law.

Human nature is complex and human personhood stands outside the realm of knowledge and predictability. Therefore, when it reaches a certain point, law, whose purpose is to sustain freedom and promote virtue, become a de facto burden, regardless of its apparent benefits.

When a law fails to honor human nature and personhood, when it reaches a scale and obscurity that the common man can’t grasp (usually because he wisely wants to direct his energy elsewhere), when it disregards the incentive to fulfill one’s duties and maintain one’s independence, such a law may well benefit the powers that be, but it will always carry unintended consequences by directing the energy of the subjects to adapting to the law rather than living just lives.

This applies to the classroom as much as it does to the tax code.