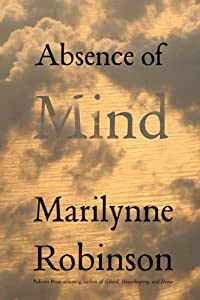 Pulitzer Prize-winning literary matron Marilynne Robinson has earned our respect and attention as the author of such superb fiction as Gilead and Housekeeping, and of sharp-yet-compassionate criticism as in The Death of Adam. Her latest offering, The Absence of Mind, issues a challenge to ‘new atheists,’ to politicians, to psychologists, to all who campaign against morality, religion and the extraordinary inner life of human beings through the misapplication of science.

It will help the reader if an introduction is made to the aptly descriptive word “parascientific.” By the genre of the parascientific, our author unveils a whole body of literature that claims the authority of science or scientific findings, but does not have the objectivity (or discipline) of science. Parascientific literature claims to find in science support for opinions which science itself could not prove or even deduce.

Quite a range of well-know authors produce parascientific works – from Darwin to Dawkins – and Robinson recognizes that while they all propose pan-explanations of human origins and existence, these explanations are, in fact, mutually exclusive of each other. For example: if culture is driven by Freudian psychosexuality, then Marxist economic theory is drastically flawed. Or, take these two parascientific understandings of human conflict: “Conflict is natural and unavoidable to us as evolved animals” vs. “Conflict is caused by religion, therefore religion is bad.” Obviously, the statements are incompatible. Robinson notes that “rationalist arguments are not harmonious with one another – except in their conclusion, which clearly exists in anticipation of their various justifications.”

What parascientific worldviews do have in common, what they commonly conclude, is a disregard for or discredit of the vast internal experience of being human. While appearing to rely on reason (which they say is a faculty dependent on the mind), parascientific writers, in their campaign against human religious life, share a denigration (or complete denial) of the human mind.

That the human brain is the “most complex object know to exist in the universe” and that the brain far overshoots the necessity anticipated by parascientific theories is rarely if even taken into account. Of course not just the physical brain, marvel though it certainly is, but our seemingly limitless capacity for inner life and experience is a whole universe left unexplored, abandoned as a hopelessly unfashionable metaphysics. Parascientific thought must deny the reality of phenomena it cannot accommodate (here, the human mind) or “scold the phenomena for their irksome presence.”

Because of her high opinion of the capacity of the human mind, Robinson is free to take seriously the influence of culture and philosophy (products of the mind) on the lives of her opponents. Her placing of Freud in the context of early twentieth century Vienna is delightful, and her chapter “The Strange History of Altruism” demonstrates how the presence of the mind in the human person explains our behavior far better than any behaviorist. She sees hope and purpose where her opponents see only necessity and confusion.

A note about her style: Robinson is thrifty with words, delineating terms and diagnosing key characters in such a short space that Absence of Mind becomes almost frustratingly concise. But a small platform can command a wide view if given sufficient elevation. The thoughts as well as the writing are quite elevated, so a slow pace is recommended for the reader to absorb the full impact of her argument.

This reviewer was discouraged at first, trying to read the book too quickly because of the fascinating nature of the subject. The hardcover edition is only 135 pages, and demands a commitment out of proportion to its size. The attentive reader will not go unrewarded. We hope this book is Robinson’s introduction to a lengthier conversation she will continue in the future.