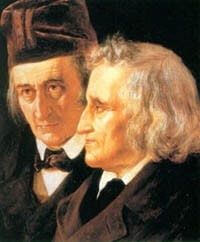 My wife recently wrote an essay for her college English class comparing Disney’s 1950 film Cinderella to the literary version told by the Grimm brothers. The contrast was revealing.

Whether deliberate or incidental, the Disney version seems to effortlessly recast the story within a fantasy world of dreams without consideration or reference to the personal duty and responsibility preserved in the Grimms’ version. Disney’s Cinderella awakens not the moral imagination, but the dreamer’s untamed fancy.

I am reminded of Lewis’ analysis in An Experiment of Criticism. He begins chapter 6 by defining three types of psychological fantasy, the second of which he calls “Morbid Castle-building.”

A pleasing imaginative construction entertained incessantly, and to his injury, by the patient, but without the delusion that it is a reality. . . . It becomes the prime consolation, and almost the only pleasure, of the dreamer’s life.”

I see this most clearly in the way the two versions of Cinderella portray the child’s parents. In the Disney film there are no respectable adults to direct Cinderella. The mother is absent or dead, and the father dies early in the film. The leading adult is the step-mother, who offers no substatnive model for parenting.

Grimms’ version begins with an ailing mother who calls her daughter to the bedside with the invocation, “Dear child, continue devout and good. Then God will always help you, and I will look down upon you from heaven and watch over you.” The father never dies, but remains somewhat aloof throughout the story. It is apparent that the story of Cinderella builds on a child’s devotion to her mother in honoring the call to “continue devout and good.”

Regardless of the bloody events to follow in Grimms’ telling of Cinderella, do we rob children of a moral cultivation when we replace “continue devout and good” with “may your dreams come true?”

Buck Holler is a former horse trainer and rodeo cowboy from Red Bluff, CA. After receiving more injuries than winnings he retired from the rodeo circuit to study theology and languages at Gordon-Conwell Theological Seminary. Leaving the beautiful New England campus he jumped back into the arena of secondary education as a teacher. Buck first joined The CiRCE Institute as an apprentice in 2007. In 2009, he moved to NC with his wife and three daughters, teaching, farming, and raising animals. He leads an East Coast Apprenticeship with The CiRCE Institute as a head mentor, and, mirabile dictu, leads CiRCE's first Latin Apprenticeship aimed to promote and support the study of Latin in Latin.