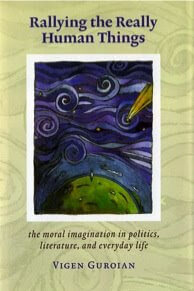 Now available as part of our Further Up & Further In fund raising campaign is part I of Dr. Vigen Guroian’s wonderful book Rallying The Really Human Things.

This fascinating first section is called “The Three Voices of Christian Humanism” and examines the work of GK Chesterton, Flannery O’Connor, and Russell Kirk.

The PDF version of this book can be yours for whatever price you feel it’s worth. As part of our campaign it – and several other downloads – are yours when you make a donation to CiRCE of any amount. Yes, it can be yours for just $1.00.

Here is some more information on the book:

For Vigen Guroian, contemporary culture is distinguished by its relentless assault on the moral imagination. In the stories it tells us, in the way it has degraded courtship and sexualized our institutions of higher education, in the ever-more-radical doctrines of human rights it propounds, and in the way it threatens to remake human nature via biotechnology, contemporary culture conspires to deprive men and women of the kind of imagination that Edmund Burke claimed allowed us to raise our perception of our own human dignity, or to “cover the defects of our own naked shivering nature.”

In Rallying the Really Human Things, Guroian combines a theologian’s keen sensitivity to the things of the spirit with his immersion in the works of Burke, Russell Kirk, G. K. Chesterton, Flannery O’Connor, St. John Chrysostom, and other exemplars of the religious humanist tradition to diagnose our cultural crisis. But he also points the way towards a culture more solicitous of the “really human things,” the Chesterton phrase from which he takes his title. Guroian’s wide-ranging analysis of these times provides a fresh and inimitable perspective on the practices and mores of contemporary life.

About the Author:
Vigen Guroian is Professor of Theology at Loyola College in Maryland. He is the author of numerous articles and books, including Ethics after Christendom: Toward an Ecclesial Christian Ethic and Tending the Heart of Virtue: How Classic Stories Awaken a Child’s Imagination.

“In this eloquent and substantive book, Guroian uses the light of the past to point the way to a more human and civilized future.”
— Michael Medved, radio host and author of Right Turns

“Guroian is a rare and precious bird these days: a scholar of the Real. Here he focuses his moral passion and theologian’s mind on some of today’s most smoldering issues.”
— Kevin Ryan, Professor Emeritus, Boston University

“Vigen Gurorian’s courageous and discerning vision illuminates both current issues of burning importance (campus promiscuity, nationalism, and gay marriage, for example), and major Christian thinkers of the recent past (Chesterton, O’Connor, and Kirk). This compendium is a resource that will help us all see more clearly.”
— Frederica Mathewes-Green, columnist for Beliefnet.com and author of The Illumined Heart: The Ancient Christian Path of Transformation

“These eloquent and wide-ranging essays in the moral imagination establish Vigen Guroian as our own Chesterton. For with fine Chestertonian wit, he demonstrates that the modern West is not heinously wicked so much as it is wildly virtuous, as the old Christian virtues, uprooted from their native theological soil, continue to produce mad sprouts. Responding astringently to the cultural and religious vexations of our age, Guroian restores these saving virtues to the deep loam of Christian tradition.”
— Ralph Wood, University Professor of Theology and Literature, Baylor University

“Rallying the Really Human Things does not so much inform as remind. Vigen Guroian has busied himself with one of the most pressing tasks in our intellectual life, which is to rescue the dignified word “humanism” from the damage wrought upon it by both the secularly self-sufficient and the piously ignorant.”
— Tracy Lee Simmons, author of Climbing Parnassus: A New Apologia for Greek and Latin

“Professor Guroian’s book is both a powerful and provocative defense of traditional Christian humanism in its conflict with secularism.”
— Bob Cheeks, intellectualconservative.com

“Of course, this review hasn’t even mentioned excellent essays on ‘gay marriage’ and why businessmen ‘should read great literture.’ There are myriad positions in his pages I would like to sound with trumpets on one hand and anathematize on the other. Like Chesterton, Guroian can write infuriating passages, but never dull ones.”
— David Paul Deavel, Gilbert Magazine