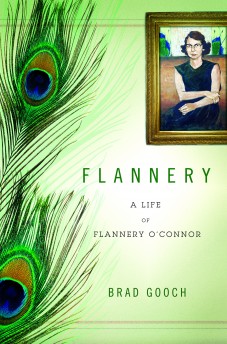 Since the publication of her first novel,1952’s Wise Blood, Flannery O’Connor has been one of America’s most beloved, albeit enigmatic fiction writers. When she died at the tragically young age of 39 from lupus, the disease that killed her father too, the world of American letters lost one of her most accomplished and promising young voices, a woman whose skill and dedication to her craft had catapulted her, without doubt, into the royal family of American authors.

Today O’Connor, whose birth name was Mary Flannery O’Connor, is remembered mostly for her darkly comic plots and strange characters, and rightly so. Her fascinating, grotesque, Gothic, thoroughly southern stories were told in lucid, daring prose that gave life to the deeply comic yet sophisticated characters and ideas to which her supreme imagination gave birth. Most readers who venture into her stories come away changed, with a fresh perspective on what fiction can, and should, be. At times, her tales – and the worlds in which they take place – are dark to point of oppression, yet they are always rooted in the bright light of redemption. She once wrote in a letter that her “subject in fiction is the action of grace in territory held largely by the devil,” further explaining in her essay The Fiction Writer & His Country that “redemption is meaningless unless there is cause for it in the actual life we live.” She believed that recent modern culture operated under “the secular belief that there is no such cause.”

The vision that spurred her fiction was one, therefore, in which redemption is truly necessary, in which grace becomes meaningful because without it all is emptiness. So while much of the modern fiction most often compared to her is rooted in a desperate, contagious form of nihilism (see, for example, Cormac McCarthy), Flannery O’Connor’s work was born out of a dedication and firm belief in the grace of the Supreme Creator. Theologically sophisticated in her thinking, O’Connor was dedicated to the Catholic church much of her life and found it’s liturgical, Eucharistic practices to be iconic, to be windows through which she learned to see the world, particularly the words in which her stories occurred. And this faith emanated from the pours of every sentence she wrote.

Less appreciated, however, is O’Connor’s critical thought on the art and purpose of writing, a subject about which she wrote, spoke, and thought extensively and articulately. In an essay called The Nature and Aim of Fiction, she wrote explained that “everywhere” she went she was asked where she thought that modern Universities stifled too many writers. She responded that her opinion was that they don’t stifle enough of them. She said, “there’s many a best-seller that could have been prevented by a good teacher,” a comic sentiment that belies the seriousness with which she approached her craft.

O’Connor was utterly convinced that writing, especially fiction writing, was a discipline that must be cultivated. A good writer must not only have an experience upon which to build a story or a way with words, but must also understand the tools of writing. This may seem obvious on the surface, but in an artistic ethos – one that continues now in fact – that is built upon the principle of free expression and post-modern relativism, things like form, the skill of observation, and a strict attention to detail are often cast to the wayside. O’Connor believed that a theme should never be able to be separated from a story but should be so much a part of the story that to tell it separately would be to destroy the tale altogether, to render it useless. She argued, in Writing Short Stories, that “a story is a way to say something that can’t be said any other way.” Stories are about themselves not about themes, she argued. And as such they demand that the story-teller must be disciplined and dedicated to his craft. About this she was comic but feisty.

Regrettably, for many years much about O’Connor’s life has been a secret. She valued her private life immensely and so guarded it with a pitchfork, although she seems to have thought her’s a relatively simple existence. She wrote to a friend that “as for biographies, there won’t be any biographies of me because, for only one reason, lives spent between the house and the chicken yard do not make exciting copy.” Until recently she was, for the most part, prophetic.

While there has certainly been a great deal of critical work composed about her canon, Brad Gooch’s recent biography Flannery: A Life of Flannery O’Connor is the first book to explore and present the details of her everyday life, including her odd fascination with fowl, her strained relationship with her mother, the tragic early death of her beloved father, the various relationships she built with a number of notable literary figures, the battles to get her novels published, the often sub-par critical response to her work, and, of course, her own fatal battle with lupus.

Moreover, Gooch takes a fairly in-depth look at the influence of her Roman Catholic faith and her strong opinions about writing. He examines the influence of her years in an all girls school where she was taught by strict nuns, and her years in the then experimental public schools that were founded upon the liberal pedagogy of John Dewey, a theory of learning that remains the backbone of American public education and one that O’Connor ruefully derided for the rest of her life. Gooch goes on to explore the influence of her years at Georgia State College for Women and the newly minted and now world famous Iowa Writer’s Workshop, both schools where she formed hugely important relationships. One of the most interesting portions in the book is the section that discusses O’Connor’s visit to the famous Yaddo artists colony in New York where she shared a few weeks with some of the up and coming writers and artists of the period, including Carson McCullers, Robert Lowell, Patricia Highsmith, and Clifford Wright, among others. Gooch masterfully juxtaposes O’Connor’s southern charm with the more bourgeois crowd in which she found herself. And while she was, in many ways, a fish out of water, it was here that O’Connor began to refine the literary voice that defined her stories.

But perhaps the book’s greatest strength is its close examinations of the relationships between the people she knew and the characters that appeared her stories. She was merciless, in many ways, often saving her most scathing satirical characters for the people whom she most loved, a practice that Gooch suggests began when she was still a child. Indeed, many of her most familiar characters appear to be direct representations of people with whom she grew up.

While perhaps not easy to get to know, O’Connor was genteel and charming, even as the “wolf” ravaged her body, and she was certainly trustworthy. She had a contagious wit and mesmerizing blue eyes that caught the attention of all who met her, an interesting fact that Gooch recalls a bit much. She was loyal to a fault but always dedicated first to her faith and then to her craft. Her famous relationship with Robert and Sally Fitzgerald has been well-documented, and is closely examined here as well. But Gooch also looks into the sometimes mysterious qualities of many of her other relationships, including with Betty Hester, who for years was known simply as “A.” And while romance never took hold of O’Connor, it certainly seems to have flirted with her, bouncing on the periphery of her life.

Yet, O’Connor was, of course, enigmatic. She was, and still remains, a mystery – a paradox in many ways (after all she was born into the world of William Faulkner but considered herself a follower of Hawthorne). Naturally, she wasn’t perfect and Gooch takes a balanced, fair look at her imperfections, including her sometimes unfair opinions on race and politics, as well her disdain for her mother’s ways. She was, in many ways, a spoiled child and she could certainly be a bit of a brat, as her letters testify. She was human after all.

Finally, and perhaps most importantly, Flannery also considers O’Connor’s allegiance to her home. O’Connor was from the South, and so was a southerner through and through. She lived in Milledgeville, Georgia and died there. And, as Gooch makes clear, had she lived anywhere else her work would have been altogether different, likely, even, less than what it became. Especially poignant is Gooch’s documentation of her childhood and the influence of early twentieth-century Southern culture on her young mind. She grew up in a world still smarting from the Civil War and so she too grew up with quite a bit of southern pride. She once wrote that “to be able to recognize a freak, you have to have some conception of the whole man, and in the south the general conception of man is still, in the main, theological.” Brad Gooch presents the context in which such a sentiment might be born.

Flannery ends with a tragic but extraordinary serious of pages that detail the months before her death in which she finished her final stories, said her brave goodbyes, and displayed her faith.

The territory of Flannery O’Connor’s fiction may have been the devil’s ground, but the territory of her life was, despite her flaws, indubitably that of Grace, a fact Brad Gooch does a fine job revealing.