That Shriveled Grind (on teaching reading) 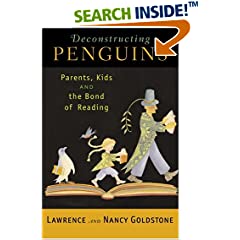 “During the past five years we’ve heard from parents again and again how difficult it has been to get children who have read nothing but pap to focus when the books assigned in class get more complicated.

You wouldn’t belive someone who said it didn’t matter what your child ate as long as they ate something, and then fed them candy all day. Reading is no different.”

I found the foregoing quotation on a really helpful blog called Walls of Books, run by Angela, a home-schooling mom. I must say, I am continually astounded at the serious and diligent labour home schooling moms put into the research required to build their own curricula. Some people don’t want to reinvent the wheel. The home school mom proves the irrelevence of that metaphor. Engineers know that to understand a wheel you have to reverse engineer it. That’s what these moms are doing with the curriculum. If you haven’t had to do it yourself, you don’t realize how courageous an act it is.

But that’s an aside – a panegyric to the home schooling mom. What I want to address directly is the significance of the quotation above on teaching children to read. Angela quoted Lawrence and Nancy Goldstone from their book Deconstructing Penguins: Parents, Kids, and the Bond of Reading.

In the typical middle class household, the parent reads books to children before they go to school and those books are usually dominated by Dr. Seuss and other children’s literature. 50 years ago, Dr. Seuss was entering the child’s bedroom in the evening for end of day reading, but most people read classic fairy tales, fables, mythology, and nursery rhymes to their children.

To see what parents read to their children 50 years ago, take a look at the immortal My Book House series, edited by Olive Beaupre Miller. The child who read these 12 volumes by, say, sixth grade, received a junior liberal education. I highly encourage its use as the “Core Curriculum” for the grammar stage. It’s incredibly cost effective too, because you can buy 20 or 30 sets used (they stopped printing it in 1970 after a 50 year run) for about $100 each and be set for 20 years.

I mention this set partly to make people aware of it and partly to show you a significant change that has taken place in reading over the past 50 years. The change is this: 50 years ago, parents read things to children that children could not read themselves, that were not directly primarily at the senses, and that contained deep formal and material lessons for the children.

First, parents read things to their children that the children could not read themselves. That is to say, if a child couldn’t decode the phonograms, that didn’t prevent the parent/teacher from reading to the child. We tend to confuse reading with decoding and then to say a child can only read what he can decode. This misunderstands the very nature of reading. A four year old child can handle an incredibly complicated syntax (grammatical structure) with amazing intellectual dexterity.

My son Matthew sat still for a long time when he was still in soft blue one piece pajamas with those cute feet that are so adorable in little kids jammies while I read (at his request) one of the Chronicles of Narnia. He might have been three at the time. Maybe even two.

But I’m convinced we make our children dumber by sending them to school. How? By stopping reading books over their heads when they arrive in kindergarten. Suddenly graded readers allow them to read only books that they can decode themselves. What they used to read passively (through their ears) is too often removed from their diets because “it’s above their level.”

It’s to the point now where the children of 50 years ago don’t remember that their parents read fairy tales, adventure stories, fables, etc. to them before they were in school. So they only read Dr. Seuss to their children and those children aren’t particularly interested in reading but if they are they are inclined to read very simple, inane, contentless works to their children.

As a result, we are truly dumbing down our children. We must make at least two distinctions: that between dependent and independent reading and that between reading and decoding. A child is reading dependently when he needs someone else to decode the sound symbols (letters) for him. He may not yet know how to decode or he may just feel like listening. The point is that he is being read to. But his intellect is still reading. The order and structure of the communication is the order and structure of written communication, which is a significantly different thing from spoken communication.

While listening, his eyes are not reading, but his mind is. This distinction is critical. When the child begins to decode words, he is not, to be very precise, reading. He is decoding symbols. The intellectual activity is profoundly different, which is why you can have a superb reader who can’t spel to saiv his lyfe.

Then begins a gradual transition between decoding and reading, during which the mind becomes increasingly comfortable with the decoding, so much so that it becomes automatic, the child no longer needing to pay any more attention to the specific phonograms (letters and their combinations) then the adult does. But this becomes automatic and unconscious only after the child has mastered the code.

That’s why most children need to learn the phonograms very consciously. Some don’t because they seem to intuitively grasp the coding, but even they benefit from a sound phonics program because it makes them more conscious of what they are doing so automatically.

Once the decoding becomes background work, done unconsciously from practice the way a basketball player makes just the right move without thinking about it because it’s been driven into his muscle memory, then the child can read independently. This is the third metastage of reading and it is what we are looking for.

So the child grows through three stages: dependent reading, decoding, and independent reading. I cannot stress enough how important it is for the child to continue to read dependently when he is learning to decode. The four year old who is reading fairy tales through his mother’s eyes and mouth is gaining far more intellectual skill than the five year old who is not being read to beyond what he can decode. And that older child is probably losing the thrill of reading by virtue of the pap on which he is practicing decoding. Nobody wants to “see Spot run” in such a devestatingly unimaginative way.

Second, parents used to read books that were not primarily directed at the senses. Books 50 years ago had pictures in them and some were even beginning to add color. But most pictures were simple line drawings that allowed tremendous room for the imagination to go to work. Book publishers have discovered that children respond to bright red, to primary colors, to thick black lines. They have found that these properties lead to more book sales. Some may even have concluded that since children respond it must be good.

But it has never been a good thing to indulge the senses as an end in themselves. The senses have always tried to dominate the intellect and to distract us from what matters more. They have never been wise in their distribution of energy. Wisdom requires a well trained intellect, one that has carefully considered, not sales, but the health of the soul being nourished.

If we want our children to love reading, we must stop appealing to their untrained senses without regard for taste or intellectual development (cf. Veggie Tales), and we must drive them into the text itself, where they can live the action, feel the anxieties and hopes of the characters, enter the imaginative world of the story, and experience reading as a personal act of the soul instead of merely an external act of analysis.

Third, the books parents read 50 years ago contained deep formal and material lessons for the children. That means that ideas were contained and communicated in the very structure of the text and those ideas were worth learning.

We simply cannot exagerrate the extent to which Progressive Education practices are an intended revolution that has failed miserably by succeeding so spectacularly. Dewey and Kilpatrick and their disciples were radically opposed to the traditional curriculum. They argued that it inhibited the child’s freedom and growth. For it they wished to substitute a contentless curriculum, at least so far as the parents and teachers could inculcate content, a curriculum that minimized the importance of reading becuase reading was secondary to social change. They wanted to produce radicals who would overthrow the old, stifling traditional culture.

They have succeeded. It would be fitting for them to apologize.

And they succeeded primarily by replacing the old stories. When Plutarch wrote his “Lives of the Noble Greeks and Romans” he did so because he believed that contemplating virtuous actions could help us become virtuous while contemplating vicious actions could warn us against vice. Dewey explictly rejected the notion that seeing vice or virtue in history or literature could cultivate virtue in a child. Books interfered with experience and experience was everything.

So King Arthur was replaced by Dick and Guinevere was replaced by Jane. Children found reading boring just as movies started permeating the world with their Hollywood values of freedom from moral restraints and traditions that tie us down. Commitment came to be seen, not as the means to achieving adult maturity and fulness, but as the obstacle to our development as human beings.

A new literature has been forming over the past 50 years, a literature dominted by excessively direct attacks on issues that are beyond the child’s moral and intellectual capacity to judge, by excessively sensual art, by trivial, dumbed-down language, by disrespect for the divine image, and by an almost complete obliteration of the moral imagination. In this age of the explosion of children’s literature, shockingly and distressingly little has been written that should be placed before the child.

Reading must demand something of the child; it must push him to his intellectual limits. It must also reward the child; he must hear the Piper at the Gates of Dawn in the rhtyhm of the words, he must feel the music of the spheres rolling through his bones, he must be brought alive through the awakening of his faculties of perception.

He must be allowed to hear the great books sing.

One of the benefits of this healthy diet is that the child will be able to read more complicated books when he is older, because he has a long habit of reading things over his head, a habit he received from his mother who gave her life to feeding his soul.