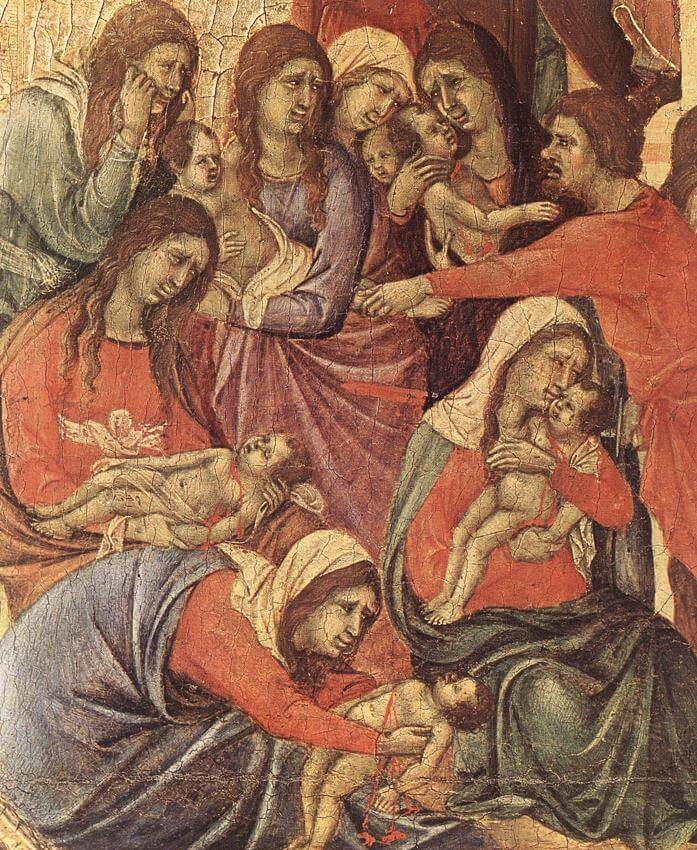 December twenty-eighth is, in the liturgy of the church, the Feast of the Holy Innocents, the day of remembrance for the multitude of children—“all that were in Bethlehem, and in all the coasts thereof, from two years old and under”—who were slaughtered by King Herod as he sought to squelch the rumored threat of a newborn King.

The Book of Common Prayer offers a prayer for this day:

O Almighty God, who out of the mouths of babes and sucklings hast ordained strength, and madest infants to glorify Thee by their deaths; Mortify and kill all vices in us, and so strengthen us by Thy grace, that by the innocency of our lives, and constancy of our faith even unto death, we may glorify Thy holy Name; through Jesus Christ our Lord. Amen.

How would I, how would you, if we were writing the prayer book, have responded to the bulk and heft and unreason of evil that was glutted in Herod’s massacre? How could any of us, who perhaps have loved a child lost to cancer or car accident, summon words to grapple with the grief-sodden horror of so many children killed for senseless hate? I don’t know; but I doubt it would sound like this. The economy and simplicity of expression that the prayer book levels against a massive evil is stunning . . . stunningly incongruous, we might even mutter.

So I have thought on December twenty-eighths of years past, as I’ve read and sought to offer this prayer. So I have thought—until this year, when I have had to offer it not only as a remembrance for antique atrocity but as a plea in present grief. For on December twenty-ninth of this year, with the prayer still echoing in my mind, I heard in the morning of the death of a dear friend to a five-year cancer, and in the evening of a stillborn baby to a another friend days from her due date. The former leaves a husband and three children still at home to carry on daily tasks and pleasures and sorrows without one who had helped bear them; the latter leaves a mother and father with no child to welcome to the place they’d prepared in their home and hearts. In the first death, we grieve for what is lost; in the second, for what was not given.

Both deaths were of natural causes; both, though shocking as always to the friends and family left to mourn, were unexceptional, happening in daily succession across the globe. Neither involved the scale or the evil of the Massacre of the Innocents.

Yet, the shadows of death in this valley illumine a depth and dignity, even a justness and joy, in the Prayer for the Innocents, to which I have until now been blind. It shines first in that phrase, so simple and so startling: that infants could “glorify Thee by their deaths.” Really? Babies? One- and two- and two-minute-olds . . . even ninth-months-in-the-womb olds? What then is glory? What is a baby? Did their incoherent deaths make legible the scrawled signature of the baby in the stable? Did they pre-empt any adults as the first martyrs, offering their lives for God in Christ? Did Rachel, weeping for her children, guess that they had died for One who would die for them—that they toddled in the long, sunrise shadows of His cross?

And what of the other babies, innocents, dead not by one man’s sin yet by all sin’s curse, lost not in Bethlehem but in every town of this groaning Creation? If God made those to glorify Him in their deaths, must He not also for the stillborn baby cradled lifeless in a first-time mother’s trembling arms?

This is the first glimmer of light in the shadows; the next is in the plea for the rest of us, who, though we escape death in infancy, must meet it again after days and years. Let us die before our deaths, says the prayer; kill the evil in us that kills innocents like these; and make us like little children, that we may lie down in our graves with blamelessness and trustfulness like theirs. For, like the brightness edging storm-clouds, not stated but everywhere implied, this petition shines with the surety of Heaven. Though life be a constant battle with our sin, and death be its assured end, yet we can speak of these things with utter calm and courage—for we know, as the poet has said, that end is not conclusion.

When we sit by the bedside to hear the rugged breaths of a once-vivacious woman; when we lay her body in its grave; when we return, heartsore, to the places left so empty by her absence, we do not sorrow as those who have no hope, nor meet death with the terror of the ancient pagan, nor resist it with the fervor of agnostic modernity. No; we sing through tears, and shovel dirt with the solemn expectation that no grave will stay closed—

—for, as the prayer so simply closes, we grieve and hope and live and die “through Jesus Christ our Lord,” the died-and-risen One, whose arms outstretch to deliver us all through the womb of this world.