Why Ceremony is Not Nonessential 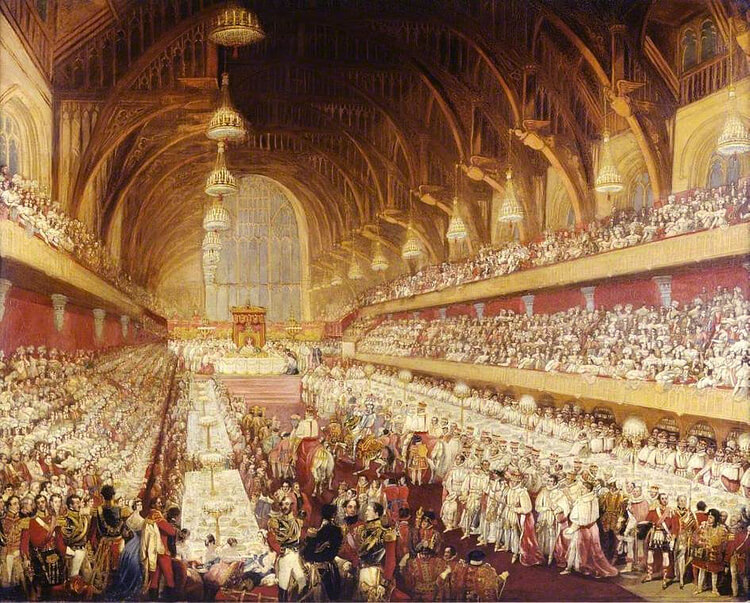 In the past few months, I have seen young friends, after anticipating their high school graduations for four years, resign themselves to virtually “walking” on Zoom. I have seen engaged couples, dreaming of their weddings for several decades, reluctantly decide to live-stream their services from an almost-empty church. I have seen a lawyer, having reached an ambition of his whole career—the opportunity to try a case before the Eleventh Circuit Court of Appeals—disappointedly agree to a settlement by phone call.

Of course, every one among us could add to this list; but when headlines screech of death tolls, economic collapse, and epidemic depression, we shy from lamenting occasions dimmed and wishes dashed. Truly, however, loss of ceremony numbers in the mounting count of this prolonged pandemic’s human costs, and it is a loss more insidious in harm, more dubious in restoration.

We were short on ceremony well before the coronavirus. For nearly a century, in fact, not much in our daily lives has had any ceremonial grace; it has been an age since we customarily dressed up to eat at restaurants, let alone “dressed for dinner,” Downton-Abbey style, at home. But, before Covid, we still attempted ceremony in some of life’s rarer moments: births, graduations, marriages, elections, ordinations, anniversaries, deaths. Admittedly, compared to the formalities and regalia of older ages, our efforts even here tended towards the nostalgic, the kitschy, the sentimental. But they were something—and they did something.

We are learning now, perhaps too late, what it was they did. They did not just add the savor that sets high days apart from ordinary days, though of course we now perceive they did. They did not merely provide respite from flat repetition and endless production, though we see that did that too. We are realizing that, somehow, over and through their transfigurement of time, they also transfigured us.

Initiating would-be readers into the highly ceremonial style of epic poetry, C.S. Lewis, in his Preface to Paradise Lost, explains how it is that all ceremonial rituals (of which he cites the epic style, Christmas dinner, and church liturgy as examples) form their celebrants. Rituals, he states, are patterns which are “set deliberately apart from daily usage, but [are] wholly familiar within [their] own sphere”; and they are “imposed on the mere flux of our feelings by reason and will” in order to render “pleasures less fugitive and griefs more endurable” and to entrust to “wise custom . . . the task (to which the individual and his moods are so inadequate) of being festive or sober, gay or reverent, when we choose to be, and not at the bidding of chance.”

Lewis’s words describe a twofold transfigurement of our souls. The first has to do with the right ordering of the soul. By participating in ceremony, we put reason and will in government over “the flux of our feelings.” As classical philosophers and Christian theologians agree, this right ordering of wisdom and will over desire is the definition of virtue. And so to take part in life’s ceremonial moments is to practice the mechanics of virtue we will need in its ordinary ones—like a little boy practicing good form on his swing, over and over again, before any pitcher comes to throw him a baseball.

But ceremony does not merely put our souls in good form; it also, gradually, fills that form with right feeling. Ceremonies—be they formal rituals or family traditions—give us familiar, shared, recognizable patterns by which to enact the emotions proper to the time, and faithful enacting births genuine feeling, finally rendering “pleasures less fugitive and griefs more endurable,” as Lewis says.

Each of us can probably recount times that we witnessed ceremony transfiguring others’ or our own soul’s form and feelings. Among my little-girl memories is wonderment at the way my mother kept every one of our family’s special days with imperturbable cheer, kindness, and enthusiasm; even when I knew she was burdened by worries or a migraine, on Christmas and Easter, birthdays and recitals, she threw herself into our traditional observances and carried us all along with her, her faithfulness lifting us all above her burdens. Teachers have watched robes, tassels, and solemn music transform graduates from flippant teenagers to decorous scholars. Public officials have seen classical architecture and formal titles imbue debate with a dignity utterly absent from the stages of electioneering. Parents have seen the transition from high chair to dining table suddenly reform even a toddler’s mealtime manners.

Yet ceremony does even more than this. In addition to forming nobility in our souls, it also awakens us to the nobility inherent in life. “To hold a celebration,” says philosopher Josef Pieper, “means to affirm the basic meaningfulness of the universe and a sense of oneness with it, of inclusion within it.” Furthermore, because “we cannot conceive a more intense affirmation of the world than ‘praise of God,’” the meaning communicated to us in our celebrations is the meaningfulness of being a worshipper, an adoring creature in God’s good created order.

As Pieper argues throughout Leisure the Basis of Culture, this is, of course, the inherent nature of our lives; yet in our fallen condition we do not live in daily awareness or accordance with it. And so we need times of Sabbath, of celebration, of ceremony, to call us back to what we are. In celebrating a ritual, we step out of the world of our own making and choosing, into a world of partaking and receiving God’s grace. We step out of a world where we are the source and arbiter of worth, into a world where our worth is given and affirmed by our Maker. We step out of the isolation of individual action, into the communion of action repeated and shared throughout ages. We step out of a cross-eyed stare at our own small anxieties, into memory’s long gaze at the layers of time remembered and time to come. We step out of the pressure of the day’s strife and fragmentation, into the harmony the medievals pictured as an intricately-wrought chain or a perichoretic dance. And it is from this refreshed awareness of what life is and who we are, Pieper says, that we become able to pursue our twofold creaturely calling: to worship God and to create culture.

This, finally, brings us back to ceremony’s endangerment by pandemic—perhaps, more accurately, by panic. When, in the frenzy of panic, we label as “essential” only what keeps our bodies safe, healthy, and economically provided for, we discard as “nonessential” all of what keeps our souls awake, vibrant, and spiritually nourished. We trade the auditorium for Zoom and pretend graduation does not feel flat. We trade the courtroom for the conference call and wonder why the rulings do not seem weighty. We trade the sanctuary for the screen and limp along without sacrament. We take away all the lenses through which we could glimpse meaningfulness, and conclude that perhaps the meaning was a mirage. We strip ceremony from our celebrations, only to realize celebration and ceremony are one and the same.

No one is enjoying this, no one is hoping this state of things will continue world without end. Everyone wants the quarantine lifted. But meanwhile we are living in a new and dangerous dualism—a variation of the old body-vs-spirit under the new headings of essential-vs-nonessential. Even when the danger has passed, the dualism will linger. And ceremony is not just endangering to our immune systems; it is costly, inconvenient, and inefficient. In our Age of Efficiency, even after Covid, are such nonessentials as ceremony likely to be fully reinstated?

Then again, ceremony was not lost in one fell bureaucratic swoop. It had already worn thinner and thinner over decades of chafing against the pressures of liberation, convenience, pop culture, and social leveling. We had already thrown away so many of the ceremonies of our private lives—the tiny daily rituals called “manners” and “decorum”—that, when Covid came, we had not much ground, let alone conviction, to argue against cancelling the ceremonies of our public lives.

And so the way forward—the path toward restoration, not only of our accustomed ceremonies, but of the older, fuller, high-hearted life in which we celebrate with abandon for the ennoblement of our souls—might begin with all of us, now centered in our homes, restoring to them the small ceremonies of home and family. Stand for elders. Hold doors for ladies. Kneel for prayer. Dress for dinner. Write thank-you notes, and say Yes Ma’am and No Sir, even if you’re not from the South.

From there, whenever we have opportunity, we might prioritize the addition of as much ceremony as possible back into our small gatherings. Host a dinner party, and set the table with all the silverware. Require suits and dresses for the first day back at school. Keep holidays at home, now that the hectic round of parties is cancelled, by attempting all the traditions you grew up with and have told your kids about, or always wanted to try yourself. Read and tell stories about the high celebrations and lofty ceremonies of the ages before our own.

These are not, admittedly, the kinds of rituals that Lewis and Pieper had in view when they discussed the soul-and-life-restoring virtues of celebration. But they are a way of adding depths and shallows back into life, of restoring, if not Ceremony itself, at least the sense of the ceremonial to lives that have lately been reduced to the two dimensions of a screen. They will help us through this time, and give our children a taste for what we hope to reclaim in a time to come. They will begin the cure of what Lewis called “the modern habit of doing ceremonial things unceremoniously,” and will begin to restore instead “the proper pleasure of ritual.”