What I’m Reading: The Odyssey – Book 5 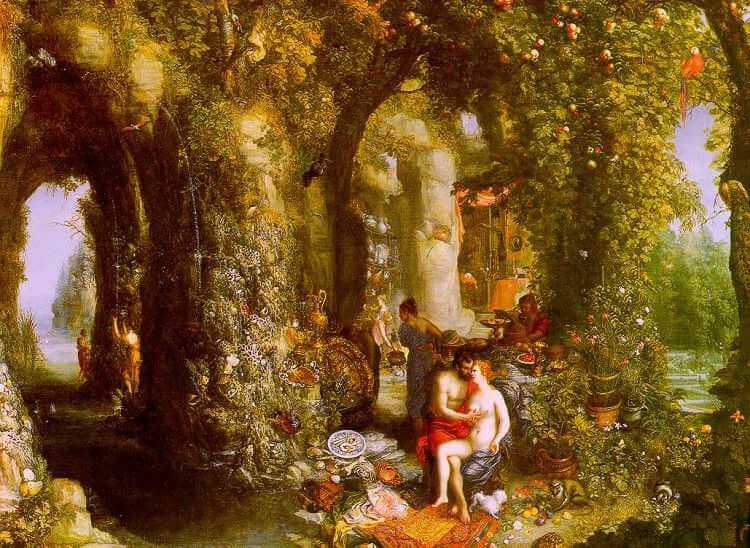 When book five begins we find ourselves in the same place where book one began: Olympus, where the gods are in session. And, as in book one, we listen as Athena pleads Odysseus’ case. “Father Zeus . . . “ she says, “be one whose thought is schooled in justice.” And justice, she claims, demands that both Odysseus and Telemachus be free to return home.

I find it fascinating that as the Telemachy ends and we get this re-boot of sorts at the beginning of book five, we find both Odysseus and Telemachus, father and son, far from home while dangerous forces seek to block their homecomings, their nostoi. While Telemachus faces the prospect of ambush at the hands of his mother’s suitors, Odysseus is trapped in the home of his own suitor. It’s a beautiful home, so beautiful in fact that even Hermes, the messenger god sent to free Odysseus, is mesmerized.

There was a great fire blazing on the hearth, and the smell of cedar split in billets, and sweetwood burning spread all over the island. She was singing inside the cave with a sweet voice as she went up and down the loom and wove with a golden shuttle. There was a growth of grove around the cavern, flourishing, alder was there, and the black poplar, and fragrant cypress, and there were birds with spreading wings who made their nests in it, little owls, and hawks, and birds of the sea with long beaks who are like ravens, but all their work is on the sea water; and right about the hollow cavern extended a flourishing growth of vine that ripened with grape clusters. Next to it there were four foundations, and each of them ran shining water, each next to each, but turned to run in sundry directions; and round about there were meadows growing soft with parsley and violets, and even a god who came into that place would have admired what he say, the heart delighted within him.

I imagine Hermes leaning against a tree, his head tilted slightly back, eyes closed perhaps, as he takes in the scent of the place, as he tastes the ambrosia in the air. I imagine that he stood there for a long time and rested and only when he felt renewed from his long journey did he move to fulfill his mission.

Yet, as Hermes discovers, Odysseus is less entranced with the place – and with his host, despite her great, immortal beauty. Hermes finds our hero on the beach, weeping as he stares out at the ocean, “breaking his heart in lamentation.” Odysseus has no eyes for the loveliness of the place, no desire to make it his home. It is here, finally, after all he has endured (which we learn about later), Odysseus finally goes into what Eva Brann* calls a deep depression. After all he has endured, at the gates of Troy and on the open sea and beyond, it is here, in a place where even the gods are enamored, that his endurance begins to waiver.

And, although he recognizes Calypsos’s beauty and seems to be thankful, of a sort, for the safety she’s provided him ( or perhaps he’s just a gentleman), he’s desperate to return home.

Of course, Calypso believes that she is reason enough for him to stay and she insists that staying beside her is better than the risk of the open sea:

“If you only knew in your own heart how many hardships you were fated to undergo before getting back to your own country, you would stay here with me and be the lord of this household and be an immortal, for all your longing once more to look on that wife for whom you are pining all your days here. And yet I think I can claim that I am not her inferior either in build or stature, since it is not likely that mortal women can challenge the goddesses for build and beauty.”

His response? You’re right, goddess; but still, I want to go home. “What I want and all my days I pine for is to go back to my house, and see my day of homecoming.” This is interesting because there’s no mention of Penelope here, except to agree that Calypso is more beautiful than her. Why doesn’t he say, “but still she’s the one I love and I want to be with her”? Or, “I’ve committed to her and I need to go home”? Or even, “my son is there and it’s time I see him again”?

I believe this has less to do with Odysseus’ lack of interest in (or commitment to) his wife as it does with his understanding of home as a concept. Home is more than a place, more than a gate and a hearth and a dining hall. It’s more than brick and mortar, more than the rocky slopes of the island over which he once ruled. Home is all of those things, but it’s Penelope too, and Telemachus. It’s the servants and the people he rules and cares for. Home is his history and his ancestors, and it’s the future whether or not he is a part of it. Odysseus longs to be home not simply because it’s a warm bed or a beautiful wife or a growing son, although these things are desirable to a man like Odysseus. He longs to be home because he has a part to play in the kind of history the place writes and because it has a part to play in the history he writes. Home is roots and seeds and harvest.

Calypso’s island is beautiful and it’s history mesmerizing. It’s future is full of tranquility and comfort. But he has no roots there and he’s played no part in it’s invention. Truth is, he never could be part of the making of a place so made by gods and goddesses. There’s a stark and dramatic difference between Calypsos’ lovely island and Ithaca where, as Telemachus says in book four, the rocks take over vast swaths of land. Just as Penelope is no comparison to the goddess in beauty, neither is Ihaka to the goddesses island. Hers’ is a home made and tended by gods, his is a home made and tended by man – and in particular by Odysseus’s people. Hence his deeply felt attachment. And hence Telemachus keen need to defend it from ruin.

The Odyssey is about homecoming but it doesn’t idealize home. Home is where the heart is, if I may, not for sentimental reasons. Just the opposite: it’s where his heart is because it’s where his blood is. And, yes, there are many double meanings in this idea.

This kind of richness is what makes the Odyssey pure magic.

– Not surprisngly, Calypso means, literally, “I will conceal”, according to Eva Braun.