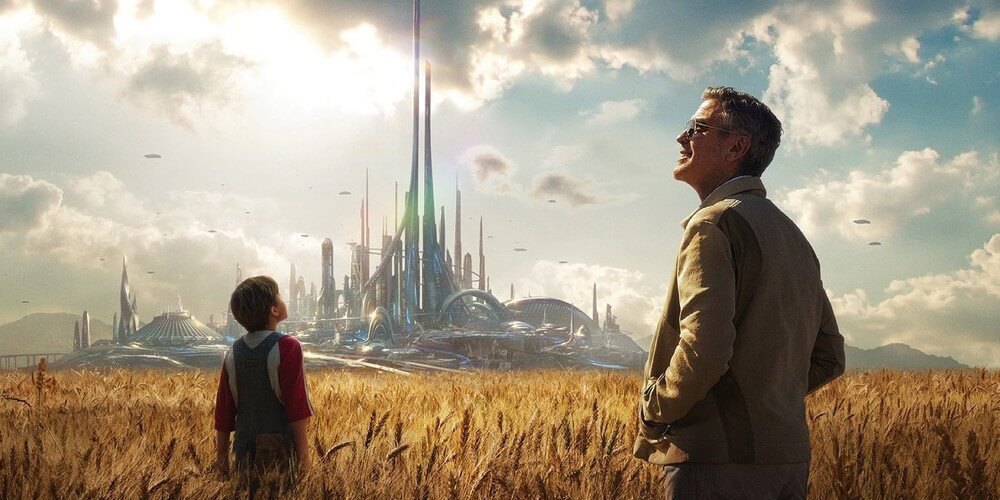 I don’t normally show my children new movies, but earlier this week we watched Tomorrowland (2015) and five days later, I’m still sore about it. While I normally show them classic movies, 80s movies, or movies they’ve seen fifty times already, Tomorrowland looked promising. It was directed by Brad Bird and written by the usually-thoughtful Damon Lindelof, whose work on Lost and Prometheus I admire. And it stars George Clooney, who has a fairly reliable eye for a good script. I took these three names as an auspicious sign.

My mistake was in allowing the film’s PG rating to clinch the deal. There can’t be anything that objectionable in it, I thought.

In my defense, this is not a mistake I often make. Given that most of the movies I show my children are classics, ratings rarely play a role in determining what they see. MPAA ratings did not originate until after the end of the Hays Code in 1968. Prior to 1968, movies didn’t have ratings, which meant movies aimed at adults and movies aimed at children had to meet all the same standards. Anyone choosing a film to watch that was made before 1968 must make their decision based on the quality of the film, then, not the level of “objectionable content” in it.

A great many Christian parents choose films for their children based on ratings alone and assume, like I did, that nothing all that awful, scarring, degrading, or disgusting will transpire in a film rated PG. Whether or not a film will ennoble young viewers and charge them with virtuous purpose is beside the point, at least when the point is entertainment.

I was wrong to assume, however, that Tomorrowland would not have objectionable content in it simply because of its low rating, for while the film did not contain graphic violence, coarse language, nudity, or discussions of sexual aberration, it was chock-full of soul-crushing, family-friendly, inspirational nonsense. The plot of the film does not need to be rehashed here but suffice to say that Tomorrowland is a two hour, two-hundred-million-dollar public service announcement that the world needs dreamers— like bourgeois buskers, people who plant trees, hike, build automobiles with 3D printers, or work on windfarms.

“The world needs dreamers” struck me as a message so banal, so dull, it might actually go over the heads of children, who innocently suppose adults know better. Several days after watching the film, I spoke with my daughters Beatrice (8) and Camilla (10) about it.

Gibbs: What was the message of Tomorrowland?

Gibbs: Huh. Very good. And what is a dreamer?

Camilla: Someone who invents things.

Beatrice: Someone who doesn’t give up.

Gibbs: And why does the world need dreamers? What are dreamers good for?

Beatrice: Dreamers amuse themselves by inventing things so they can become rich.

Gibbs: What kind of things?

Gibbs: I see. Do you remember the villain in the film?

Gibbs: Was he a dreamer?

Beatrice: He was a dream-killer.

Gibbs: His dream was to kill dreams?

Gibbs: Did the villain ever give up on following his dream?

Camilla: Only when the other dreamers killed him.

Gibbs: But not until then?

Gibbs: So, the villain was an inventor and he never gave up?

Gibbs: So, the movie was about two kinds of dreamers fighting each other? Good dreamers and bad dreamers?

Camilla: The movie didn’t have anything to say about that.

Gibbs: Of course, it didn’t.

I am not sure this discussion was really necessary, though, because my children could see I despised the movie as soon as it was over. Somewhere in their hearts, they had begun trying to figure out why I despised it, which is often enough for children. One must begin by teaching them what to think. Later, they learn how.

As I mulled the movie over, though, I knew it was no more vapid than most kid-friendly, family-friendly movies made in the last twenty years— but I paused on this point for several hours until I came to an unsettling realization. There is no kind of film I trust less than a PG-rated film. There is no film more likely to be philosophically cancerous than a PG-rated film made in the last twenty years. Almost all of the intellectually coherent, theologically compelling, artistically moving films that have been released since the turn of the century have been rated R. Since the year 2000, philosophically coherent R-rated films outnumber philosophically coherent PG-rated films by a ratio of twenty-to-one.

I do not write this as someone who believes that all the grit, grime, and depravity of the world needs to be present in a film in order for the film to be honest. I think very little of realism and would not mind obscenity, vulgarity, nudity, exit wounds, and mockery of the clergy being banned once again. And yet, films weren’t better under the Hays Code just because such content wasn’t allowed. They were better because all the grit, grime, and depravity of the world had to be subtly implied, hinted at, referenced, inferred, and interpreted, not just indelicately thrown up on the screen.

Children’s entertainment has gone the way of all things marketed to children, though, for we dress children in garish colors, feed them cartoonish food, and ply them with insipid games and music. Walk through the toy section of Target, then the children’s clothing section. Peruse a kid’s menu at a restaurant, then spend ten minutes flipping through kid’s options on Netflix. The lion’s share of American culture which is geared toward children is brash, gaudy, zany, loud, convulsive, spasmodic, erratic, tacky, flashy, nauseatingly colorful, or just plain irritating. It’s not that my children are too good for Target. No matter where I am shopping, if I find plain, dignified clothing that fits my daughters, I always feel like Elijah receiving bread from the beaks of ravens. Anyone from a bygone era who magically appeared in modern America could be forgiven for supposing all the adults had conspired to drive the children insane before they turned twelve. Americans regard children with such contempt, just about anything marketed to children is highly suspicious. Regardless of what it was supposed to mean, today, PG means “probably garbage.”

After you have surveyed the children’s clothing section of Target, sit down and read the first ten pages of The Wind in the Willows. Consider the mood of the book. Is it exuberant, somber, rambunctious, contemplative? While the book does not have any platitudinous messages about teamwork to convey, how might it nonetheless help train children to become adults who enjoy cooking and polite conversation about the weather, wrap their Christmas presents carefully, tithe, and not drink to excess or watch Game of Thrones? A little more than a hundred years ago, The Wind in the Willows was thought fitting for children. Today, it would probably be over the head (or the attention span) of the average college-educated adult.

I just want to know what good it will do.