“This Soul Bread Take”: A Poem for Maundy Thursday 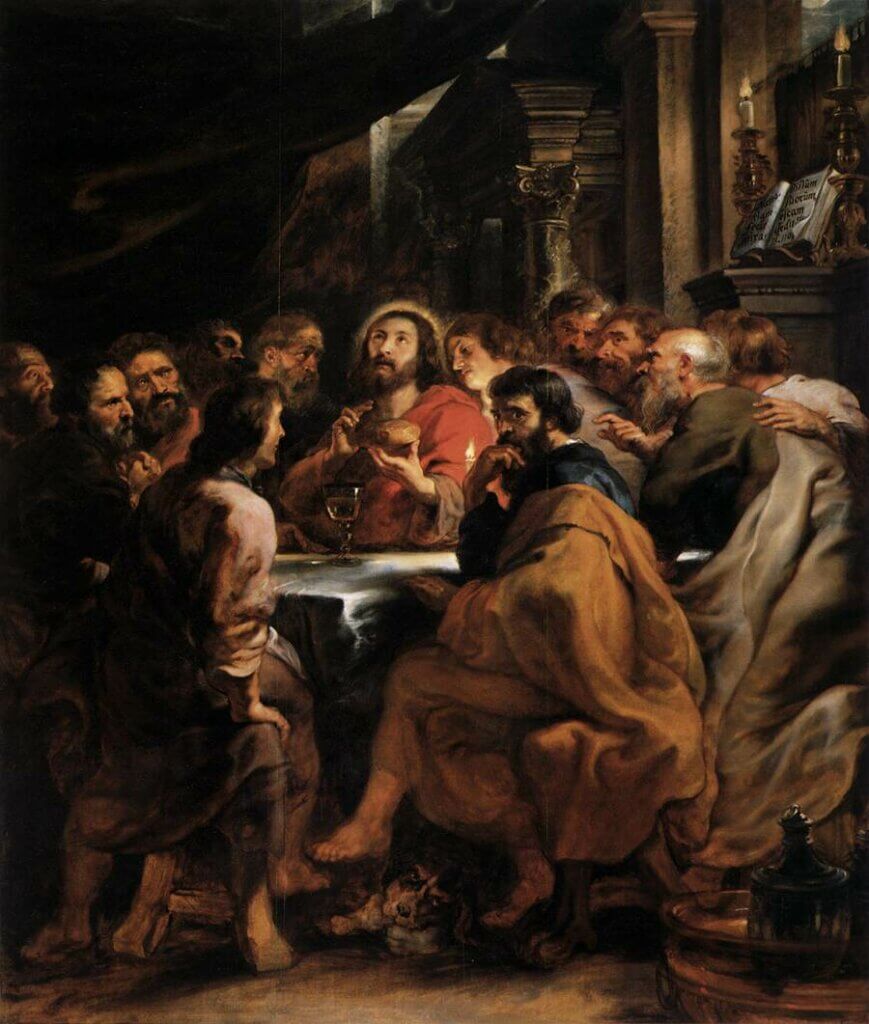 Along with the treasuries of church liturgies, sacred music, special meals, and supremely, Scripture’s Passion narratives, poetry can aid the remembrance and contemplation we seek during the high days of Holy Week. This will be the first of several poem postings offered as Holy Week meditations, each including a brief guide to the poem before presenting the poem in full.

“This bread is My body, broken for you. This wine is My blood, shed for you. Do this in remembrance of Me”: The words of the Last Supper have echoed through the sanctuaries of churches and memories of Christians down all the subsequent centuries. Yet, on the cusp of Holy Week, the observance of Maundy Thursday urges us to contemplate them not only as sacramental pronouncement, but also as speech-in-history; not only as eternal declaration, but also as inauguration of our Lord’s Passion. To those yearning to meet these familiar words afresh, the metaphorical exploration of Edward Taylor’s “Meditation 8” may surprise and stir up wonder.

To those who knew him, Edward Taylor (1642-1729) was a pious and learned Puritan who, after immigrating to America from England for religious reasons in his twenties, studied at Harvard and then became pastor to a frontier settlement in western Massachusetts. But to a few close friends, and most of all to his God, he was known also as a poet. Taylor wrote poetry throughout his life, working in a variety of forms, but his poetry was largely unknown until its discovery in the Yale University Library in the 1930s, where it had been left by Taylor’s grandson. Taylor was quickly recognized as a foremost early American poet in the English metaphysical tradition of Donne and Herbert.

Among Taylor’s poems are the prayerful meditations which he wrote each month as part of his preparation to administer the Lord’s Supper to his congregation. In “Meditation 8,” Taylor probes the metaphorical depth of Jesus’ declaration, “I am the Living Bread.” In the first stanza, Taylor describes a vision of a pathway opening from the boundaries of the world to throne room of heaven, and the Bread of Life being mystically delivered along that path. In the following stanzas, he imaginatively recounts the drama of redemption through the imagery of this Bread. He tells how his soul, pictured as a bird in a cage, “pecked” the forbidden fruit and so fell into famine, for no other food of either the world or the angels was fit to nourish a soul. But God in grace “grinds and kneads” the “Purest Wheat in Heaven”—His own Son—to bake bread which the soul can eat. This soul bread, rapturously called “God’s White Loaf” and “Heaven’s Sugar Cake,” sustains the soul with eternal life.

Though intended as preparation for the Lord’s Supper, Taylor’s poem is also a fitting meditation on the Last Supper. Nearly everything about it is startling, especially to a modern reader, whether its tangled phrasing, its unconventional capitalization, its archaic diction, or its jarring imagery. Have you ever thought of your soul as a “tweedling bird”? Or the bread of the sacrament as “Heaven’s Sugar Cake”? On first reading, the metaphors seem almost irreverent; but if allowed to sink into the imagination, absurdity gives way to profundity. Before the mind has fully adjusted, the senses themselves awake to affirm a rightness in savoring the sweetness of Christ’s offering as if it were cake, the light and purity of His being as a white loaf. In particular, for a Maundy Thursday reading, the harsh imagery Taylor uses to describe the making of the Bread of Life—grinding, kneading, molding, baking—evokes awe and gratitude for the sacrifice of the Son.

I kenning through Astronomy Divine

From that bright Throne unto my Threshold lie.

And while my puzzled thoughts about it pour,

I find the Bread of Life in’t at my door.

When that this Bird of Paradise put in

This Wicker Cage (my Corpse) to tweedle praise

Had pecked the Fruit forbade: and so did fling

Away its Food; and lost its golden days;

It fell into Celestial Famine sore:

And never could attain a morsel more.

Alas! alas! Poor Bird, what wilt thou do?

The Creatures’ field no food for Souls e’er gave.

And if thou knock at Angels’ doors they show

An Empty Barrel: they no soul bread have.

Out streams of Grace: and He to end all strife

The Purest Wheat in Heaven His dear-dear son

Grinds, and kneads up into this Bread of Life.

Which Bread of Life from Heaven down came and stands

Dished on Thy Table up by Angel’s Hands.

Did God mold up this Bread in Heaven, and bake,

Which from His Table came, and to thine goeth?

Come Eat thy fill of this thy God’s White Loaf?

It’s Food too fine for Angels, yet come, take

What Grace is this knead in this Loaf? This thing

Souls are but petty things it to admire.

Ye Angels, help: This fill would to the brim

This Bread of Life dropped in thy mouth, doth Cry:

Eat, Eat me, Soul, and thou shalt never die.