“The Sharp Compassion”: A Poem for Good Friday 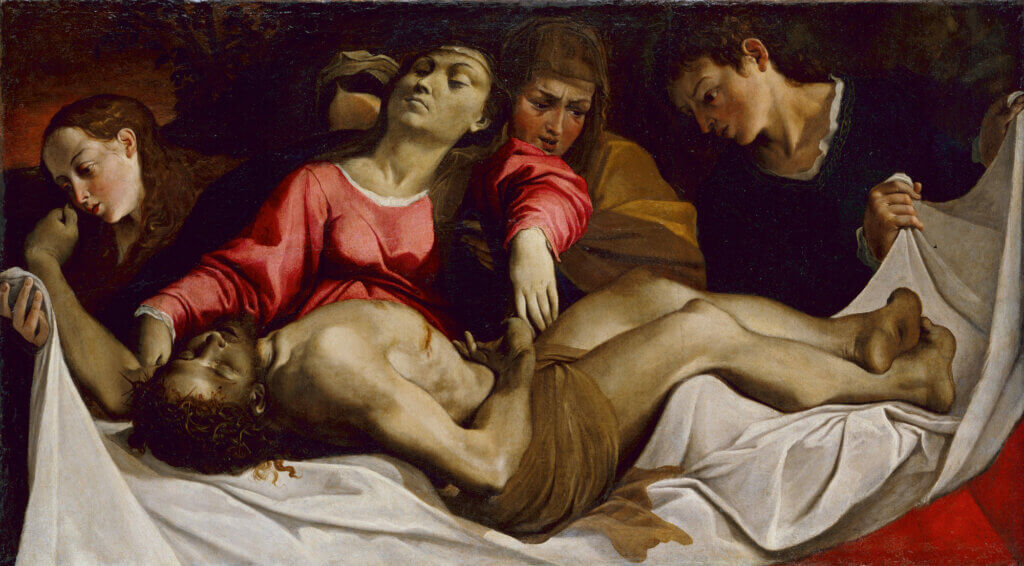 This darkest day of the church year is fraught with harsh paradoxes: the crowds that hailed Christ as king mere days ago now cry for his crucifixion; the only perfect Man is condemned as a criminal; the sins of the all the world’s time and space are expiated at the point of a cross in the hours of a death; the eternal God perishes; and this Friday of deepest tragedy is yet called “good.” But T.S. Eliot contemplates another paradox in his poetic meditation on Good Friday from The Four Quartets: the mystery of our healing at the hands of a wounded Savior.

Eliot (1888-1965), recognized during his own lifetime as the foremost poet of his day and of the modernist movement he helped to form, had traveled a steady, unassuming path to the Christian faith he embraced around the middle of his life and his poetic career. Born to an old New England family of Unitarian stock and educated in academic philosophy at Harvard and Oxford, Eliot affirmed the moralism, work ethic, and erudition that his family and education had imparted; but he also began to yearn for the solidity and significance of a more ancient tradition. His first great poetic work, The Waste Land (1922), expresses this yearning in sweeping yet poignant imagery, capturing the early-twentieth-century sense of splintered faith and culture in its famous line, “These fragments have I shored against my ruin.” Yet by 1927, Eliot’s yearning had led him to the Church of England, where he planted himself in the Anglo-Catholic faith in which he remained deeply rooted for the rest of his life.

The Four Quartets, completed in 1942, is at once Eliot’s last great poem, his religious refraction of The Waste Land, and one of the most profound Christian poems of the twentieth century and the literary canon. Intricate in theme and form, it probes the relation of time and redemption, the self and history, the soul and the Savior, in a quartet of four long poems each having five sections. As the title suggests, its structure resembles music in its use of motifs, recurrence, and theme-and-variation.

The fourth section of East Coker (the second poem in the quartet) presents, in perhaps the most concise and straightforward declaration of the whole work, a picture of Christ Who is at the center of all of it. In other parts of the work, Christ will be pictured more abstractedly and symbolically as “the still point of the turning world”; but here, His portrait is heart-rendingly human. For, drawing on medieval and biblical imagery of Christ as both the great Physician and the suffering Savior, Eliot paints Him here as “the wounded surgeon.”

In throbbing rhythm and sharp rhymes—reinforcing the physical trauma and surgical procedures the poem describes—these five stanzas clothe Good Friday’s paradoxical revelations of the nature of salvation, sanctification, and sacrament in the garb of the hospital. Christ our Lord is “the wounded surgeon” with “the bleeding hands,” healing us who are sick in the knowing and mercy bought of His own sacrifice. The Church that ministers His salvation is staffed by “dying nurses,” able to attend the suffering because they share in their condition. “The whole earth is our hospital,” a place in which all instruments and all activity are intended to work our healing—and yet that healing comes through them form of worsening sickness, unpleasing care, eventual death, and the nourishment of the “dripping blood” and “bloody flesh” that alone can sustain our bodies and spirits alike.

The full, final healing is merely hinted at here; a joy beyond death is not proclaimed; for this poem single-mindedly honors “the sharp compassion” by which “we call this Friday good.”

The wounded surgeon plies the steel

That questions the distempered part;

Beneath the bleeding hands we feel

The sharp compassion of the healer’s art

Resolving the enigma of the fever chart.

Our only health is the disease

If we obey the dying nurse

Whose constant care is not to please

But to remind of our, and Adam’s curse,

And that, to be restored, our sickness must grow worse.

The whole earth is our hospital

Endowed by the ruined millionaire,

Wherein, if we do well, we shall

Die of the absolute paternal care

That will not leave us, but prevents us everywhere.

The chill ascends from feet to knees,

The fever sings in mental wires.

If to be warmed, then I must freeze

And quake in frigid purgatorial fires

Of which the flame is roses, and the smoke is briars.

The dripping blood our only drink,

The bloody flesh our only food:

That we are sound, substantial flesh and blood—

Again, in spite of that, we call this Friday good.