Editor's note: This essay is part of our series of monthly reflections on important works of music. Every month we'll bring you a new post just like this one. Thanks to Lindsey Brigham for spearheading this project. 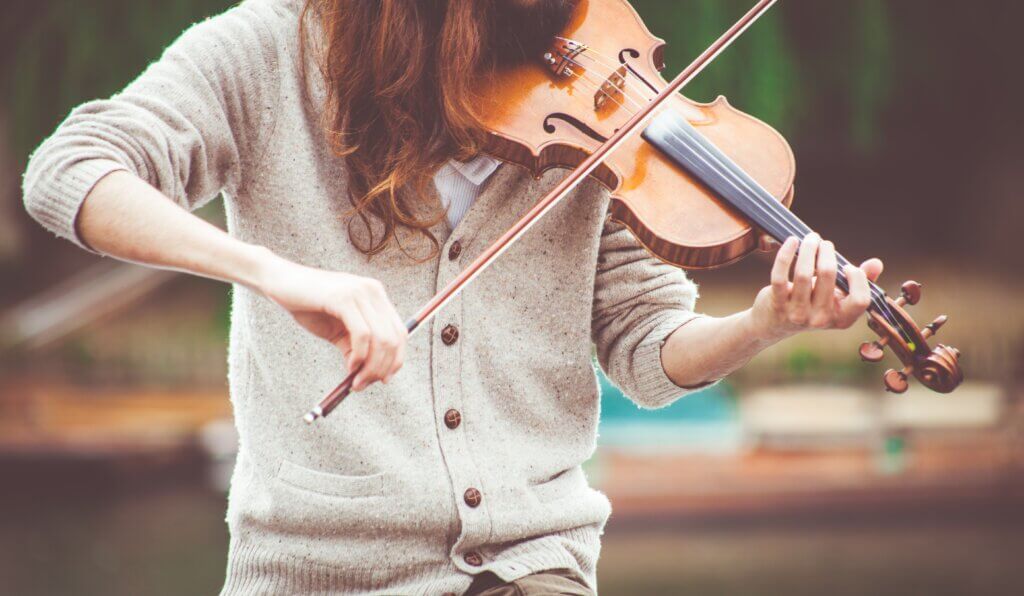 What’s the difference between a violin and a fiddle? That’s one of the most frequently-asked questions about my instrument, and the answer is: not much, and a whole lot. Once upon a time, the instruments differed slightly in form. But nowadays, the difference lies in the sound and the culture, as Jem Finch, from To Kill a Mockingbird, knew well, and as I’ve discovered:

“She looked at me over her sewing glasses. ‘Jean Louise, there is no doubt in my mind that they’re good folks. But they’re not our folks.’ Jem says, ‘She means they’re yappy, Scout.’ ‘What’s a yap?’ ‘Aw, tacky, they like fiddlin’ and things like that.’”

As a maturing violinist, I shared Jem’s sentiments about fiddling: having been classically trained on violin from preschool through high school, fiddling was not what I did. As much as I enjoyed the toe-tapping, dance-like tunes of the fiddle, what I did was Bach partitas and Vivaldi concertos. When I graduated high school, however, and decided not to attend a classical conservatory for violin, I was left feeling a little lost. All of a sudden, I was no longer required to learn those Bruch concertos or Kreisler exercises; there were no recitals or competitions to prepare for. What was my violin supposed to do now?

Somehow, that closed door became an open window into a whole new world of music: Old-Time. A few musician-friends began picking up guitars, banjos, and old-time tunes on Sunday evenings after church services were over, and soon music scores titled “Cotton Eyed Joe” and “Greasy String” and “Whoa Mule” were floating around our house and my violin case. Folk festivals replaced symphony concerts, street corners replaced the stage, farmers’ markets replaced competitions, and songs like these replaced Bach and Vivaldi:

But what exactly is Old-time music?

Often recognized by its distinctive instruments, old time bands feature fiddles, banjos, and guitars, and maybe other instruments such as dulcimers, mandolins, and basses. Old-time’s history goes back to America’s founding. It came from many different traditions of folk music, arrived with the first settlers, and flourished in the rural areas of our country. Influenced by English ballads, Irish reels, and other regional tunes, it is a conglomeration of traditions, ways of life, and dance steps.

These rustic, rural tunes are the sound that let us know we have reached a place of hearty simplicity, a place we have seen before: our roots.

Perhaps what most easily defines old-time is what it is not: Bluegrass, which you can hear a sampling of here. Bluegrass was brought to life in the 1930s by Bill Monroe and Earl Scruggs, pioneers who took the instruments and spirit of old-time and brought it to a different level, making it a technical, performance-based genre perfect for the stage. There are many humorous differences, too—as one website puts it: “The Bluegrass fiddler paid $10,000 for his fiddle at the Violin Shop in Nashville. The Old-time fiddlers got theirs for $15 at a yard sale. A Bluegrass band tells terrible jokes while tuning. An Old-time band tells terrible jokes without bothering to tune. Bluegrass band members wear uniforms, such as blue polyester suits. Old-time bands wear jeans, sandals, work shirts, and caps from seed companies.”

As humorous as these differences may be, they touch most closely on the real distinctive of Old-time music. While Renaissance music seems most fitting in a church, classical in a symphony hall, and Bluegrass on the stage of the Grand Ole Opry, Old-time is most fitting on a front porch. Void of the difficult techniques of these other genres, it is usually written in two simple keys—D or A—with three chords: D, G, A (though if you’re feeling fancy, you can throw in a C or E minor). Tunes are written with two parts—an “A” and a “B”—which are repeated, sometimes ad nauseam. It’s written for many folks to join in, often folks who have not been trained to play the instrument they find in their hands.

And so, Old-time music celebrates those ordinary and yet so extraordinary joys of the human life—the kind that Sam Gamgee longed for as he journeyed up Mount Doom, that the Pevensies enjoyed with Mr. and Mrs. Beaver, and that Rat and Badger shared with Mole. It creates, as Wendell Berry is so fond of saying, a membership, drawing many in and barring few through its simplicity. It celebrates the very mundane—and sometimes odd—routines of life with tunes entitled “Shove That Pig’s Foot a Little Further in the Fire” and “Nail That Catfish to the Tree.”

It reminds us of the virtues of repetition, that when “B” follows “A” again and again, we should have the “abounding vitality” Chesterton writes of. It draws adventuring hearts home, reminding by its familiar and familial roots where we have come from and where we are going.

“[T]hey braced themselves for the last long stretch, the home stretch, the stretch that we know is bound to end, some time, in the rattle of the door-latch, the sudden firelight, and the sight of familiar things greeting us a long-absent travelers from far over-sea.”

Like Rat and Mole waiting for the jingling of a rusty door latch to tell them they were home, these rustic, rural tunes are the sound that let us know we have reached a place of hearty simplicity, a place we have seen before: our roots. The front porch of our childhood home. The dinner table our mother set.

And isn’t that a picture of the Gospel-life? That, though pilgrims traveling to a new land, we return again and again to our roots? That when we hear the words “Take, eat, do this in remembrance of Me,” we know we have come back to our first home, for it’s the music of these words that we wait for on this last, long stretch, the home stretch?

These words, inviting us to the simple elements of bread and wine, guide our hearts homeward even as our feet travel heavenward.

Emily Brigham is a student at the University of North Florida pursuing early childhood education and sacred music. Elsewhere, she is a church musician and busker (it’s a real word—look it up!). Her current instrument count includes piano, violin, guitar, and mandolin.