A Pedagogy of Warfare: Raising up Warriors 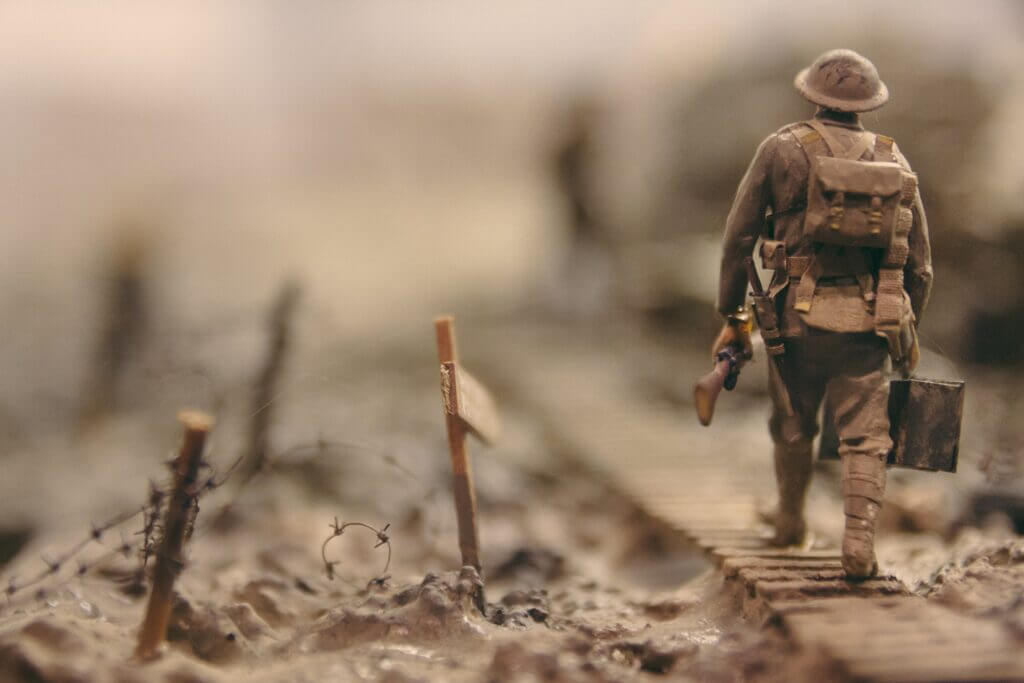 Our replacements have arrived at the front. They have come to relieve us. We have fought, valiant and unceasing, till we no longer remember a world without fighting. But we are not finished. We must prepare these new soldiers to take over our posts, to hold the line, to push forward against the Enemy. And yet, one glance at the blush of their youth and naiveté reveals that our most dire struggle will be with them. They are not ready, and we are nearly spent. Should we not tremble for the future darkness into which we send them, ready or not? How will we prepare them for the battles that lie ahead?

We will prepare them by our example. They will watch how we, fierce instruments of God’s fury, fling ourselves recklessly into the fight against the powers of evil, against the gates of Hell, against the corruption of our own hearts. They will see us turn away from the hellfire of battle for some moments of respite, to cherish in peace all the sacred things we defend. By this we will teach them, first and foremost, how to love those things for which they must one day give their lives. Then, impassioned by our example, they will learn how to war.

First, they will learn by the book. In their youth they will train on the proving-grounds of Fairyland. By reading, sons may learn to be Arthurs who pull their Excalibur from the stone, knowing it is not some feat of their own strength, but because the stone was split, for them, in two. Thus they will learn that all boys are meant to become warrior kings. By reading, daughters may learn to be Eowyns who wield the weapons of their warfare and brazenly shout their battlecry: “I am no man.” Thus they will learn the glory of valour without renown. By reading, sons and daughters will be crowned with the charge of their noble duty. By reading, kings and queens will simultaneously cherish and preserve the sacred treasures of the world. Once in their maturity, they must leave Fairyland behind for the battlefront of their lives, just as we did. But once crowned, we kings and queens are kings and queens forever.

Thus we shall pass on the torch of life, and they will take up the fight. They will fight on all fronts and they will fight under all conditions in future hells we cannot now imagine. Their battles will be too numerous to name. They will battle an Enemy who is a patrolling beast, starving and craving to consume them. They will battle a culture that relishes desecration, that aims to destroy all those things we have taught them to love and hold sacred. (These sacred things they must defend at all costs, for “those things which are precious are saved only by sacrifice.”) They will battle their own hearts, which are the worst traitors they will ever know.

Against these, they must hold the line. More: They must push the line forward, force their opponents into retreat, confront every assault with an unceasing forward march into the very darkness of the Valley of Death. They will become casualties, every last one of them, for like us they will not see victory before death; we must defeat the fear of this in our own hearts. But we have said nothing of victory, only of fighting. Victory—victory is not our business. We must leave that to our Superior, for as yet we have commissions to fulfill and orders to obey.

“Be on the alert, endure suffering, fulfill your mission.”
The front awaits. Forward march.
Fight, and fight again.

Justin Hall is a writer and musician. He holds a Bachelor of Music degree from the Cleveland Institute of Music, where he is currently completing his graduate studies in music performance.