Must We Treat Every Bad Idea With Respect And Patience?

On the limits of polite, reasonable dialogue. 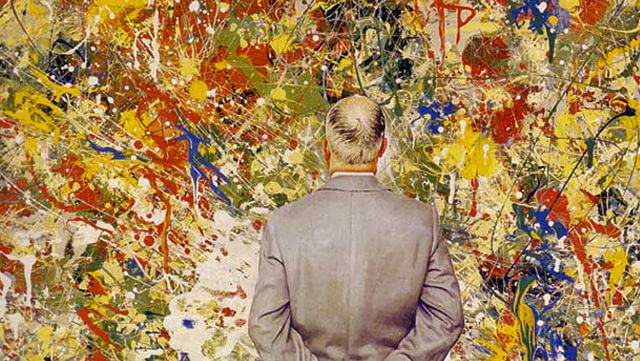 McLaren: Some students told me that you were not covering Jackson Pollock, de Kooning, Franz Kline, or any of the great 20th century abstract expressionists in your art history class. Why is this?

Gibbs: This is a classical school, and I don’t take that kind of art seriously.

McLaren: The larger art world takes them seriously, though.

McLaren: You style yourself a conservative, though. Is it not strange for a self-professed conservative to reject the majority opinion on significant, well-respected artists?

McLaren: Have you ever read an essay which unpacked Pollock’s art?

Gibbs: Yes, and I thought it far more brilliant than Pollock’s art.

McLaren: But you did not ultimately trust the essay?

Gibbs: No. One does not need a PhD to recognize that Pollock’s art is no good. I have showed Pollock’s art to my little daughters, who are 7 and 9 years old respectively, and they simply laughed at it.

McLaren: You’re not suggesting that little children are competent to judge art?

Gibbs: Children have common sense and knowing that Jackson Pollock’s art is no good is simply a matter of common sense. It’s just a lot of painted scribbles. The same kind of common sense informs little children that two women cannot marry each other and that eating an entire birthday cake will lead to a stomach ache. On the other hand, children have terrible taste, which means they think Thomas Kinkade and Bratz dolls are interesting. You have got to train them out of that kind of delusion by showing them things of real beauty, and a thing of real beauty can be appreciated by bishop and child alike. If I want to tell my children that Bratz dolls are ugly, I cannot, in good faith, tell them that Jackson Pollock is good.

McLaren: I could understand someone who did not think Pollock very talented. Nonetheless, how can you simply not cover his art in your classroom? Pollock is one of the most important artists of the 20th century. Does this not entitle Pollock to be taken seriously?

Gibbs: At a classical school, no.

Gibbs: All ideas? Heavens, no.

McLaren: How can you decide whether an idea should be taken seriously until you’ve heard it out? Until you’ve engaged with it?

McLaren: (laughing) Absolutely not. Why should I? That kind of power move is typical of—

Gibbs: See? You also believe some ideas are so absurd they can be blithely dismissed with a laugh. You rejected my idea without hearing my explanation, then moved into an accusation.

McLaren: That’s because your request was absurd!

Gibbs: No more absurd that treating a lot of splattered paint as legitimate art.

McLaren: But you run the risk of offending people who take Pollock seriously, and “a brother offended is not easily won,” as the Scriptures say.

Gibbs: At this point in history, I simply don’t believe Jackson Pollock’s art meets the minimum requirements for serious treatment.

McLaren: What do you mean “taken seriously”?

McLaren: You do not think Pollock deserves this?

Gibbs: No. I believe there are scores of wrong ideas which nonetheless deserve to be taken seriously. But not Pollock.

McLaren: How do you judge between an idea that deserves to be taken seriously and one which does not?

McLaren: You seem very closed-minded, though. Give me an example of an idea you don’t accept, but taken seriously.

McLaren: Could you mount an argument against Pollock, though?

Gibbs: Yes, but it would be counter-productive. Offering the argument would grant Pollock more credibility than his art deserves.

McLaren: Aren’t you worried that uncritically dismissing another person’s ideas leads to violence against that person? Isn’t it dehumanizing?

Gibbs: Obviously an important verse to you, but not one I know off the top of my head.

McLaren: Be ready always to give an answer to every man who asketh you a reason for the hope that is in you, with meekness and fear. How can this command be fulfilled when we simply “shrug off” someone else’s ideas?

Gibbs: I need to borrow all the money you have in your bank account, your wallet, and I need you to cash in all your stocks and bonds and give the money to me.

McLaren: Is this some kind of joke?

Gibbs: Give to him that asketh thee, and from him that would borrow of thee turn not thou away.

McLaren: I think there’s obviously a limit to the implications of that verse, and that such a limit is determined by prudence and common sense.

Gibbs: I think the same is true of many Bible verses, including 1 Peter 3:15.

McLaren: Point taken, but is this really the case with Pollock? Uncritically dismissing Pollock seems a bit premature.

Gibbs: I haven’t uncritically dismissed Pollock, though. My dismissal of Pollock is based on a prior fidelity to Rembrandt, Caravaggio, Vermeer, Titian, Raphael, Courbet, Bouguereau, Ingres, Donatello, Fra Angelico, El Greco, and so forth. I have accepted the work of these artists based on their placement in the Western canon, and my acceptance of the Western canon of art and literature is based on criteria of reason, common sense, intuition, and piety. The critical acceptance of Rembrandt is a critical rejection of Pollock. In the same way, the critical acceptance of my wife as my wife is also a critical rejection of romance with any other woman. If one of your students wanted to argue some brazenly white supremacist claim in his senior thesis, would you let him do so?

McLaren: No, of course not.

Gibbs: Isn’t it dehumanizing to tell a person his beliefs are not worthy to be heard out? Are you not worried that shutting him down without hearing him out might lead to violence?

McLaren: I would be more worried about the effects of giving him a platform for his ideas. I would not want to treat racist ideals as though they deserved a seat at the table… But now I see that I have begun to sound like you. Nonetheless, all of this rubs me the wrong way. Why?

Gibbs: Because we live downstream from the Enlightenment and have made a god of “polite, rational dialogue.” When the omnipotence of our god is shown to be a scam, we fear chaos will soon follow.

McLaren: You’re a teacher, though! How can you speak so negatively of polite, rational dialogue?

McLaren: Alas, what I really want is for people to sit down and just really listen to each other.

Gibbs: People often say insulting and degrading things to each other, which means that sitting down and really listening can make things much worse.

McLaren: Then what should people who have a disagreement do? Fight it out?

Gibbs: No, of course not. In most situations, they should sit down like adults and have a reasonable, dispassionate conversation. Even when they fail to come to an agreement, they’re less likely to be angry at each other when the conversation is over. You should note that I am speaking generally, though. My opinions about morality and human conduct are untroubled by a few counterexamples and outliers. I am content to say that polite, reasonable dialogue is often the answer. On the other hand, you seem quite frustrated by the idea that polite, reasonable dialogue is not the solution to everything.

Gibbs: As do I. However, so far as the West is concerned, rising confidence in the power of polite, reasonable dialogue to solve all our problems coincided with a rise in violence, as well. Polite, reasonable dialogue simply could not bear the weight we asked it to bear. And while I would gladly grant that religious violence is terrible, I think rationalist violence is far, far worse.

McLaren: If polite, reasonable dialogue cannot bear the weight we ask it to bear, what can?