Mozart on a Whim 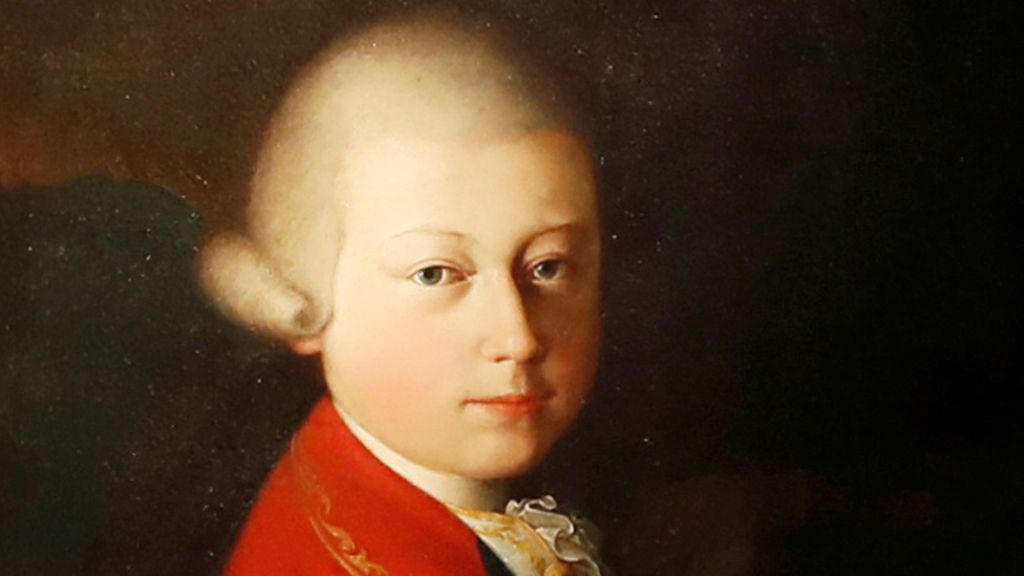 Mozart died at 35 having composed over 600 compositions. I circle that age, 35, over and over again until I fear the pen will rip through the page. Why that number means more to me than the number of compositions underscores a simple reality about learning: we can’t stop ourselves from connecting.

This is what I’m hoping will happen three hours from now when I’m tasked with teaching Classical music to forty-one college students at the Christian university where I adjunct. By trade, I’m a student of the written word, and in that world, when someone mentions a book title, the old chestnut goes like this: “Read it? I haven’t even taught it!” Tonight’s foray into musical appreciation feels, admittedly, more daunting.

I’m attempting to teach Mozart’s Symphony no. 40 in G minor. I began my preparations by looking through the resources I’ve received from other teachers of the course, pouring over the differences between the Baroque concerto and the Classical Symphony, discerning between sonatas and minuets. But there’s always this nagging voice while I prep, a voice conjured from my own ghost-of-classroom-past who asks, “Why do I need to know this?”

The question is probably a bad one. Certainly, it isn’t interesting. Steeped in a kind of nostalgia-for-industrialism, it reduces knowledge to the merely useful, a utilitarian gutting of beauty. This is why Oscar Wilde famously (and of course cheekily) said, “All art is quite useless.” I’m reminded of an episode from The Office, in which they play “Desert Island”, each character offering three books they would bring with them if they were stranded on a desert island. The following exchange takes place between Dwight and Jim:

Dwight: …hollowed out, inside: waterproof matches, iodine tablets, beet seeds, protein bars, NASA blanket, and, in case I get bored, Harry Potter and Sorcerer’s Stone. No, Harry Potter and the Prisoner of Azkaban. Question: did my shoes come off in the plane crash?

Dwight’s answer is the ideal one—we’re talking about survival here after all. But Dwight also obviously misses the point of the game, and in this way, art itself. The usefulness of the thing has no direct corollary to its goodness. Mere use, ever the supposed desire of those in the process of earning an education, turns out to be a paradox: we murder to dissect.

A better question might be, How does this connect to me? This, however, supposes quite a bit about humans. It suggests we are ready to connect, when, if truth be told, we are very inarticulate about our connections. In Self-Reliance, Emerson writes, “Not for nothing one face, one character, one fact, makes much impression on [me], and another none,” but he doesn’t tell us how to determine what causes these impressions. He, instead, encourages us to abide by our spontaneous impressions, to “write on the lintels of the door-post, Whim.”

It’s now an hour and a half before I need to leave my day job where I teach high school English and head to my night class. I’ve amassed a silly number of resources in an endless array of open tabs on my browser. In addition to a beautiful version of the symphony’s first movement, I’ve discovered one of Leonard Bernstein’s Harvard lectures in which, seated at a piano, he breaks down the first movement of Mozart’s symphony no. 40. What are the chances!?

Bernstein describes the layered movement in Mozart’s development section, the portion of a sonata where the composer freewheels off an already established First Subject. Bernstein’s left-hand moves downward through the Circle of Fifths, and a quick internet search later I’m immersed in an analysis of John Coltrane’s “Giant Steps,” a jazz monolith that turns the Circle of Fifths into a blazing ring of fire for Coltrane to backflip through as if Simone Biles melded with Evel Knievel on the saxophone. Bernstein’s right hand descends the scale chromatically. These two movements, by fifths and through the chromatic scale, shouldn’t sound as pleasant as they do, but what Bernstein points out is the utter harmony of the piece; each dominant (each fifth) seeking resolution in its originating tonic. An established harmony in nature skillfully brought to our attention through the tension a master composer creates.

As the development section intensifies, Mozart spins the Circle and allows music’s innate longing for unity to dizzily dance its way to us. And here we are, in our varying states of readiness, presented with something beautiful. What established harmony might still draw us forward? What internal resonance, untampered, might hum like Fitzgerald’s “tuning fork…struck upon a star”?

I’m packed up and I always throw in a poem in case I run short. This week it’s Wordsworth, “The World is Too Much with Us.” It contains the line: “For this, for everything, we are out of tune./ It moves us not.” In the car, I decided to focus on appreciation, to show all my cards and play for them the series of videos that led me to understand the piece. Then, send out a symphony and see what’s in tune. Maybe something will stick. Whim.

Better, I give myself to the established harmony, a renewal of faith in the generative power of tensions, the sharp longing for resolution, the delightful presence of the good. After all, in the presence of beauty, how tawdry does the merely useful appear? The delight of the child is not true delight when he asks, “What should I do with this?” If it’s good, we know what to do with it. If it’s good, it feels like a kind of home.

Elliot Dunn is a teacher in Bucks County, PA. He creates spaces for students to experience goodness and beauty.