Mowing the Lawn as Moral Adventure 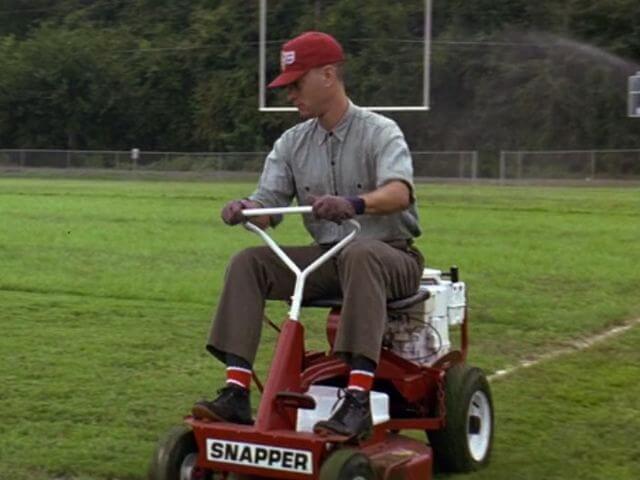 Lawn-mowing is a primary way to show respect and care for one’s neighbors, for the landscape of your yard is the view from their windows.

Being a good steward of the home God has entrusted one requires he mow his lawn, for that keeps it tidy and healthy.

The labor of mowing a lawn is labor for beauty and order.

Lawn-mowing is a primary way to annoy and disrupt one’s neighbors, for the sputter and drone of the mower shatters Saturday morning peace.

Being a good steward of creation requires one not mow the lawn, for mowing the lawn demolishes the habitat of many tiny living things.

The labor of mowing a lawn is labor for the vainglorious appearance of “having it together.”

To mow the lawn is to shake a fist in the face of the devil by repelling the entropy of the Fall.

To mow the lawn is to flagellate the groaning creation, which will produce golf-course-green turf only under the harsh duress of lethal pesticides, chemical fertilizers, and gasoline-powered engines.

A mown lawn is a carpet over one’s yard, protecting from the menace of grotesque spiders and blood-drawing thorns, so that children may play safely and merrily.

A mown lawn is a straightjacket across one’s yard, restraining the wonders of luminous insects and multiform stalks and seeds, so that children are denied both peril and its corollary, discovery.

Conservatives and classicists mow their lawns, for in so doing, they submit to the arbitrary yet essential code of manners by which civilization is upheld.

Conservatives and classicists do not mow their lawns, for if they did so, they would expend all their “time off” on menial labor and sacrifice leisure, which is indeed the basis of culture.

The man who mows his yard cares for his home.

The man who mows his yard spends so much time on it that he cannot also care for his home.

Neatly edged and trimmed lawns perpetuate the Renaissance ideal, captured in the gardens of Versailles, of creation disciplined through man’s artistry into symmetry, harmony, and loveliness.

The mower of lawns imitates our Creator, who brought form from the formless.

The non-mower of lawns imitates our Savior, who would not crush a bruised reed.

For the sake of all that is good, true, and beautiful, a man must mow his lawn.

For the sake of all that is good, true, and beautiful, a man must not mow his lawn.

What is a man to do? For though these theses may alert us to the wealth of moral import—personal, social, environmental, theological—at stake in one’s own turf, and though they may each be passionately, eloquently, and reasonably defended, yet, as the law of noncontradiction has it, one cannot both mow and not mow his lawn at the same time in the same way. To mow or not to mow is unavoidably a moral choice, but not a choice between moral and immoral: it is, rather, a choice amongst morals.

In an ideal state or an unfallen earth, one would not be forced to make such choices. They promulgate the fallacy of the excluded middle, a false either/or in which another valid option is concealed: Could other (probably older) forms of mowing technology tend the grass without terrorizing the creatures that take refuge in it or waking the slumber of late-sleeping neighbors? Could gardened nooks, wooded patches, wildflower-sown swathes make a yard beautiful, show care for the home, preserve artistry, and delight passers-by without the environmental waste of the industrial lawn? Could some reorganization of ideals and practice deliver both goodness and beauty to self, neighbor, earth, and Lord? Perhaps there is, at least theoretically, an excluded middle to be uncovered. But for so many of us, so much of the time, our corrupt state and fallen earth make that middle too distant, difficult, or costly to be practically reclaimed.

So we live in a logically false, but experientially real, either-or. To bless your neighbor’s eyes at the expense of his ears, to privilege your yard’s health over its attractiveness, or to broker any of the other exchanges implied in the theses above, is but to haggle the terms of the divorce already settled between beauty and goodness—the divorce in which we are both guilty seducers and grieving children, heirs of Adam yet perpetuators of his creation-shattering sin. God made the world so that all its moral spheres moved outward like the rings of a pebble dropped in a lake: to do good to your neighbor would be to do good to yourself, to God, to the earth. But sin, troubling the waters, interferes with the spheres so that they turn back upon and negate one another. In the deformed systems we have instituted, good done to neighbor often means ill done to earth, and vice versa; and this quandary extends far, far beyond the weekend chore of yard maintenance.

This is why moral paralysis is a familiar experience for us all—that sense that a decision must be made, that we want to make it honorably, that we are resisting the temptation to act selfishly or viciously, but that we still do not know what to decide because each decision seems simultaneously to procure some element of good and ensure some element of harm. And, because modernity’s proliferation of choices, opportunities, and knowledge compounds the variables that paralyze our wills, cynicism in turn diseases our spirits.

Is there a way through the maze? Or can we at least glimpse some meaningful pattern in the labyrinthine paths of moral decision?

Lately I have tried to navigate the labyrinth of mowing the lawn, and other such conundrums, by thinking of them not as moral quandaries but as moral adventures. An adventure, in the good strong Fairieland sense of the word, begins with a choice (accompany the dwarves or stay home? accept the challenge or refrain? walk through the magic portal or walk away?) and is subsequently propelled by choices (this road or that road? open combat or strategic evasion? believe the strange messenger or doubt him?). Through these choices, the adventures’ shape and meaning are formed, hewn like the banks of a stream through which can flow the deep moral undercurrent—good overcoming evil; bravery, cowardice; compassion, vengeance—that runs through all adventure stories. But the choices themselves, though morally significant, are not morally imperative. What the protagonist chooses matters, yet he is free to choose among options; to accept or reject the quest will carve a very different course for the moral current of the story, but either choice is permitted.

It is because of this freedom that adventures pulse with a thrill of eternal suspense: the fact that another choice could have been made, another road taken, another door opened, lends them their unique sense of both destiny and mystery. A good adventure story never goes wrong, but it could have gone other.

Indeed, the gravest threat to the adventure story is not the wrong choice, but the refusal to choose. Imagine the protagonist reaching the fork in the way and, paralyzed by the knowledge that both paths lead towards feats of honor and skill, choosing rather to turn around, go home, and fritter away the days with wry cynical comments to his friends about the quest for glory being a fool’s errand.

The theatre of our moral choices is not Fairieland, but a fallen earth. We must, at times, throw our options in the balance and weigh which one effects more good and less harm. But rather than living all our days like moral accountants, perhaps sometimes we could sally forth as moral adventurers, eager to pursue the paths of meaningfulness that our own hearts desire. Some of us, compelled by a vision of immaculate green velvet, will mow our lawns in joyous abandon, and sing as we do a song of love’s labor for beauty in a cheap, ugly world. Others of us, entranced by a dream of Eden, will step out the door and be lost in knee-high meadows of spiders and stickers, brimming with inviolate life. The choice is not only analytical, but also imaginative: which way brings into being a bit of the life I long for, enacts an “Amen” to my prayer that His kingdom come—yet recognizes that I am but one vassal of that kingdom, kin to others whose domains differ in loveliness from my own?

A conclusion, then, of two more theses on lawn mowing.

The mower of lawns is a moral adventurer who as he quests for Beauty and Goodness will ride his mower to Home.

The non-mower of lawns is a moral adventurer who as he quests for Beauty and Goodness will walk his fields to Home.