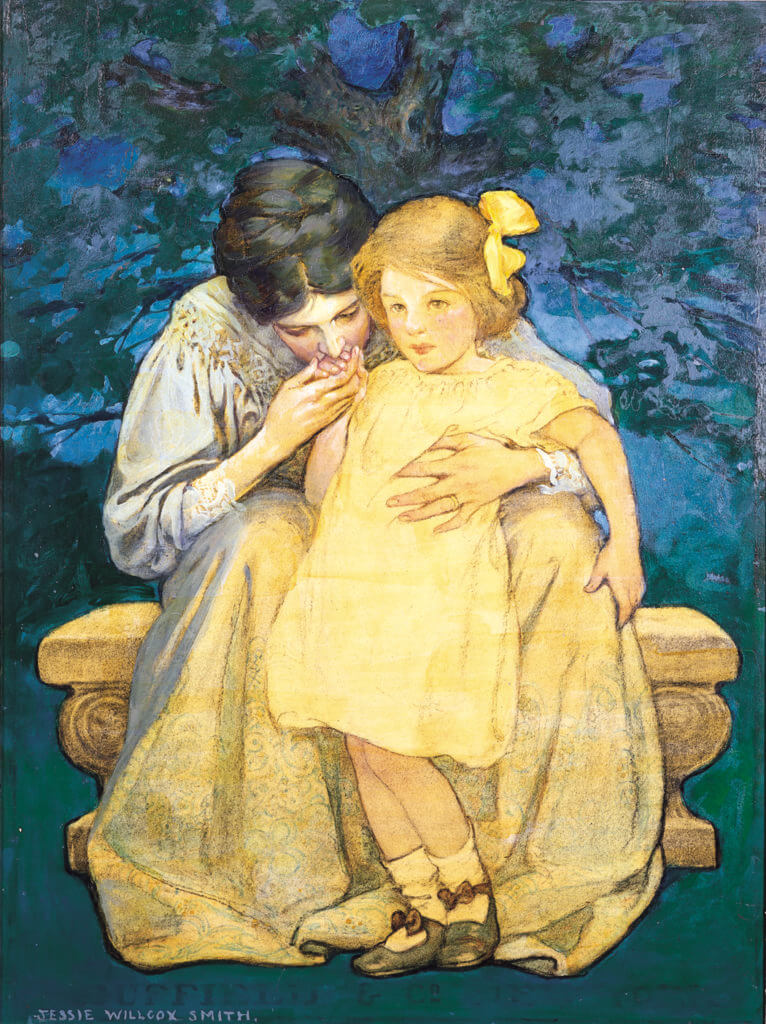 I have scruples against calling myself a Writer, capitalized, but I echo Augustine in “profess[ing] to be one of those who, by profiting, write, and by writing profit.” Never especially disciplined or consistent in my writing efforts, never attempting any grand projects, yet over the years I have accumulated piles of notebooks, loose papers, and flash drives full of words I felt compelled to write when met by beauty too strong to forget or thoughts too tangled to untie.

Forming sounder habits of writing is eternally on my list of dream-goals, and I had expected—at least, had hoped—that all the wonder intrinsic to birthing and raising a child would so fill my heart and mind that words would spill out as freely as water from a creek in springtime. I pictured myself excited to wake in the wee hours, snatching sunrise minutes to pour onto paper the torrent of words in my head. But instead of the sound of rushing inspiration, when I sit to write I hear the clock ticking down the minutes to nap-time’s end; and though becoming a mother has indeed tapped vast reservoirs of wonder, these rest in deep wells rather than rush in foaming streams.

Why has art become more instead of less difficult amidst the wonder of new life? It’s not, I think, the mere weariness of mind and muscles. Nor is it only the altered sense of time, though I have realized how the long, fallow hours of silence and waiting, simply staring at paper or walking outdoors, were more fertile soil for visible growth than is the unceasing watchfulness, and the determination to make every minute count, that life with a tenth-month-old entails.

But no; I think the more direct explanation is that the wonder and energy and vitality of mothering simply find their artistic expression in a different end. A mother’s baby becomes the chief object of her artistry.

This is nearly true by definition. The arts are skilled crafts whereby a thing is made that expresses spiritual meaning in material form. The high arts are music, visual arts (including architecture), literature, and drama (including dance); but this definition can stretch to include a host of homely crafts such as cooking, gardening, fly-tying—though as the use of the thing made becomes more primary than its meaning, it drifts further from the realm of art. The definition excludes made things that are purely functional, intended to perform a use rather than convey meaning, or that are made by chance.

Mothering, if not “art proper,” is very like it. It is a skilled craft, requiring a compendium of theoretical knowledge, yet unrelentingly concrete in practice. The craft of mothering works through the whole body of the artist, nursing, rocking, carrying, bathing, changing, singing. Like the arts, mothering can be learned, it must be practiced, and yet at its best it is largely intuitive, inspired. And the craft of mothering makes a thing, a child, delightfully present to all the senses, seen and touched and smelled and heard and kissed. Yet this thing is as spiritual as it is material, a medium and meaning, a body and soul; and, wonder of wonders, the spirit of the child is shaped by the motherly artist as much as is his body.

Yet mothering is not commonly described as an art, perhaps because of the one huge way it differs from other arts. Though composers speak of being carried away by their music, or writers of watching their characters shape the plot, for mothers this is no whimsy: the thing that their hands shape and their spirit molds does in fact have hands and a spirit all its own. An artist takes reasonable pride and delight in defining himself by his work, in claiming it as the expression of his own self. And mothers do as well: remember the times you have watched mothers identify so closely with their children that, comically, they are the more agitated ones at doctor’s checkups, more nervous before competitions, more injured over social slights. A child is not only the fruit of his mother’s love and the sum of her labor, but her embodiment of the artistry that compels and defines and gives meaning to all the human imago dei. Still, a mother, unlike other artists, hesitates to express the pride and joy and union with her work that she feels, treasuring it rather in her heart, because the thing she has made is not mere self-expression, but new and free creation.

And at that hint, though we have said that mothering is an art not quite like the others, we might perhaps say it is actually more an art than any other. If all the arts are human analogies of divine creation—if all artists are sub-creators—then the very independence and freeness that sets the mother’s making further from painting or writing or drawing sets it nearer to the making of God.

For, in the beginning, God, the humble Artist, created the heavens and the earth; and in all the daring of deep humility, He crafted as the pinnacle of creation a man and woman who, though bearing His image and breathing His breath, were not simple self-expressions. He gave them wills distinct from His own, wills they could freely bend to represent His will or to defy it. When they chose defiance, His artistry extended from creation to incarnation, making Himself like unto the things He had made, suffering with and from and for them—that, this suffering complete, He could raise His art to glorified union with Him.

Amidst the daily labor of mothering, much of it so ignoble, and over the occasional sigh that our hands cannot bring into being all the things that well up in our hearts, remember in awe that the art we have been given pictures our Lord’s own. And when the artist becomes lost in the art, and our children assume government over the bodies and spirits we have labored to shape, let us praise Him with gratitude for entrusting us with ourselves.