A Meditation For Holy Wednesday: Inside Judas Iscariot 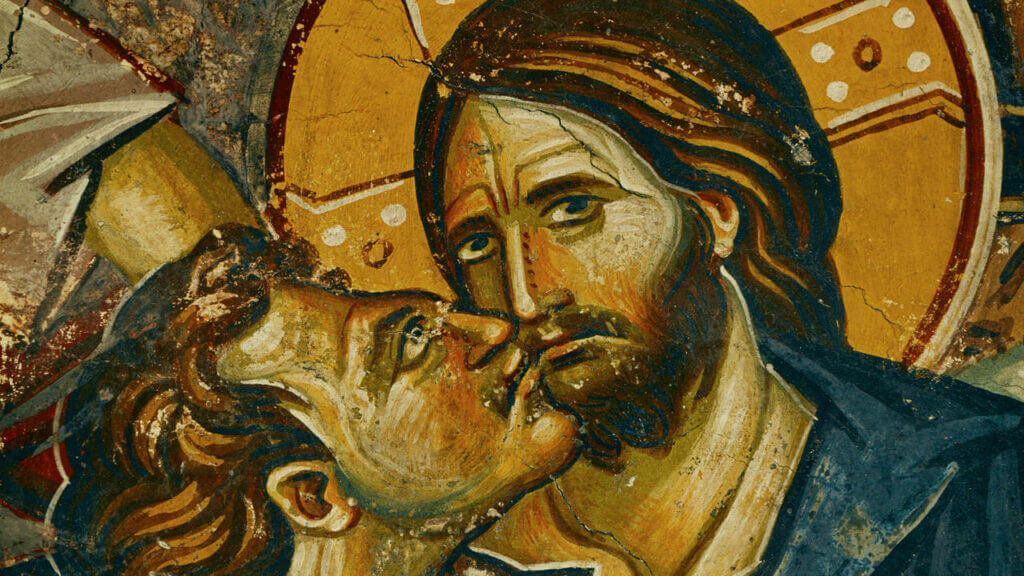 The story of Christ’s final week on earth introduces a host of characters through whom each individual reader of the Gospel may understand his own personal guilt. We may blame the Roman thirst for power or the particular cowardice of Pontius Pilate. We might blame the hatred of prophets typical of the city of Jerusalem or the jealousy and small-mindedness of the scribes and Pharisees. We may even blame Barabbas, the quizzical figure whom Christ dies on behalf of in a strangely literal manner. However, I have always understood my own culpability for the death of Christ primarily through the person of Judas Iscariot.

The story of Christ’s arrest, trial, and execution will simply never make much sense to children. When I was a child, one Easter after another, I heard the story of how Jesus was suddenly betrayed by one of his friends, capriciously condemned to die by people who inexplicably hated him, and then tortured and killed for no good reason. The fact that Christ’s arrest, trial, and execution does not make sense to children is not necessarily problematic, for there is something sane about the inability to see any reason or logic behind the slaughter of the only Good man who ever lived. Given the nature of sin, the murder of Christ might be the most perfectly arbitrary thing that has ever happened.

Paradoxically, however, there is also something entirely logical about the murder of Christ and around the hundredth time I heard the story of Holy Week, a number of pieces began to fall in place. The believability of Christ’s betrayal came together in the reading of Gospel commentaries and works of grammatical-historical criticism. Eventually, I came to understand the plight of first century Pharisees, the tenuous peace the Jews had hacked out with the Romans, and the strange ways in which Jesus might upset this peace. As the fear of the Pharisees comes into focus, so does Pontius Pilate’s cowardice. Come middle school, we all understand the fear of a crowd.

However, Judas simply refuses to play the role of a conventional villain. Judas is simply too conflicted and too foolish, for very little of his plan to betray Christ pans out. We will not understand Judas until we pay close attention to the ways we ourselves betray Christ in little things, for I am convinced that Judas neither knew nor believed his betrayal of Christ was all that wrong. We may easily imagine the ways in which he justified betraying Christ as he sought out the chief priests on Holy Wednesday:

In order for it to be betrayal, there would have to be some risk of Jesus actually getting caught. But the Master has slipped the hands of people trying to arrest Him before. I have seen it with my own eyes. And even if they do catch Him, can the Man who walks on water not also walk out of a jail cell? He can restore the dead to life, and if He is imprisoned, I am sure He can restore Himself to free society, as well. The only way Jesus is going to get caught is if He allows Himself to get caught, which He’s never done before. In the end, telling the chief priests where Jesus is might create a little hassle for us, but nothing we haven’t been through before. What are the chief priests going to do to Him? Rough Him up, perhaps. They might have Him fined, put in jail for sixty days, at worst. And that’s assuming they can even get Him.

I will tell the chief priests where He is, but actually getting the cuffs on Him is their job. I seriously doubt that will happen. And what will be the upside of it all? At least 100 pieces of silver. Probably more. Probably closer to 200. They will pay me out of the treasury, and I am quite sure that it’s overflowing at this time of year. I’ll drive a hard bargain. I’ll demand 300 pieces of silver. That will go far in making up for all the money we lost earlier today. Honestly, why didn’t that woman ask one of us first if she could clean the Master’s feet? It was very kind of Jesus to stick up for her when I pointed out how much it was worth. He didn’t want her to feel bad for doing something naïve.

With 300 pieces of silver, I can replace all the money I’ve taken out of the bag in the last year. Not that anyone ever notices. I’m the only educated one of the bunch, the only one who knows enough to keep a ledger, receipts, and do arithmetic. That’s why they gave me the task of keeping the purse. I have sacrificed more than anyone else to follow the Master. Of all 12 of us, I’m the only one who left behind a really lucrative job. I’m the only one who can tell the difference between a Sauvignon blanc and a Gewürztraminer, for God’s sake. If I take a little out of the purse from time to time for a decent drink or a better meal, what’s that to Thomas or Bart? It’s a fraction of a fraction of what I could be making back home.

Everyone has their own special little consolations, and a little better food every so often is mine. If the Master made me privy to everything James and John and Peter get to know, I could be content with that. And Andrew probably gets to hear everything from his brother, so he knows all the juicy business. The Master knows I take a little out from time to time, but He has never confronted me. I am sure He has seen me do it. Besides, this is a Man who knows what everyone is thinking. He can read me like a book. He’s fine with what I do. He doesn’t care about money. I’m sure He doesn’t care about a coin here or a coin there.

With 300 pieces of silver, I am going to get some good wine and good cheese for the festival. I’ll repay the 90 I owe, put an additional 90 in the common purse, and with the 140 left, I’m going all out for this festival. When you’re in Jerusalem, you’ve got to live it up. I might even stay behind a few days after everyone else leaves.

I’m kind of like the shrewd manager in the story the Master tells. That’s why I am not telling Jesus about this little scheme of mine. I am going to net the Master a huge profit with my cunning. I’ll repay my debts. I’m not going to bury my talent in the ground. While the Master is away, I’m going to get a huge return for Him. After He slips the grasp of the temple guards, I’ll show Jesus how much I got and He’ll say, ‘That was shrewd,’ and the others will be jealous they didn’t think of anything so cunning. Sons of Thunder. I’ll get a better nickname than that. Clever Judas. Or Crafty Judas. That’s what they’ll call me.”