Killing Ophelia: Variations on the Theme of the Older Brother 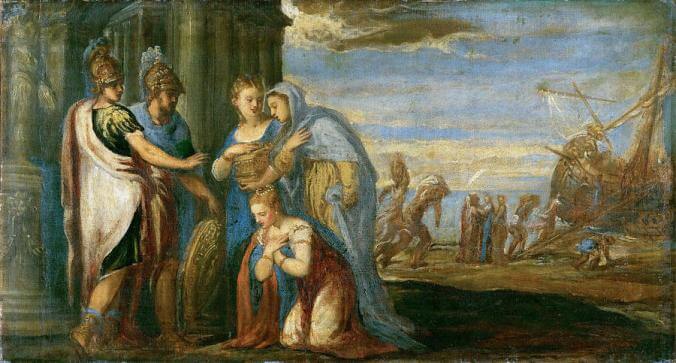 I am a member of the former group and my favorite way to do said categorizing utilizes two archetypes within the prodigal son narrative: Prodigals and Older Brothers. When Christ came to reconcile all things, he told us our story: the good Father who gave a holy inheritance, the Prodigal son who squandered it, and the Older Brother who refused to acknowledge it as lost, thus striving his whole life to earn what can only be given. The difference between them is fundamental: what motivates them? Prodigals are desire-driven people; Older Brothers are duty-driven.

These archetypes manifest in literature. Generally, stories feature Prodigals as protagonists, from Achilles to Luke Skywalker, but sometimes authors craft masterful Older Brother narratives, with heroes like Harry Potter, Elinor Dashwood, and Frodo Baggins. Two iconic Older Brother heroes are Aeneas and Hamlet, men whose duties propel them to sacrifice desire to fulfill their destinies. They are heroes caught in a deadlock between duty and desire, and their stories explore the cost of the triumph of duty.

Christians know that the thread between duty and desire was broken when Eve sank her teeth into the forbidden fruit, and we have spent all of history striving and failing to mend that fallen moment. But only the work of Christ has that power. Western culture has explored this divide in a myriad of great stories, including Hamlet and The Aeneid. If we look at these stories through the lens of the Prodigal Son narrative, they fail to tell the story of a fallen child’s reconciliation with the father through mercy, thus leaving the Older Brother unredeemed in both tales. Far from being unbiblical, this mirrors the unresolved fate of the Older Brother in the parable as well.

Like the Older Brother in the Biblical narrative, both Aeneas and Hamlet receive their destinies through father-figures. For Hamlet, this is straightforward. The ghost of his father demands that Hamlet “avenge his foul and most unnatural murder.” Aeneas receives his duty through a revelation of the will of Jove, often described as “the father of gods and men.” The ghost of Hector, another Older Brother who died in pursuit of duty, reveals that Aeneas must sacrifice his desire to fight in order to journey to Italy to found a city. Later, the soul of Aeneas’ father, Anchises, repeats this revelation from Elysium. In both stories, Fathers impose duty, which reflects the parable, but as we shall see, the Fathers in Hamlet and The Aeneid are not like the Father in the parable.

Hamlet and Aeneas both encounter the opportunity to reject their father’s duty and embrace a woman’s desire. Ophelia and Dido love Hamlet and Aeneas, but the men reject them to pursue their destinies, thus instigating the women’s deaths. Marriage would unite duty and desire, but it is denied them. In both cases, the men consummate their desire anyway, with tragic results. Thus, embracing desire is an action of death in each story. From the moment Aeneas and Hamlet yield to desire, Dido and Ophelia are doomed. They have now become obstacles to duty, and therefore enemies to the killed rather than companions to be loved. When each woman dies, it is because the story demands that she must. Duty slaughters desire in these Older Brother narratives.

Here is where we most clearly perceive the fault lines between Hamlet and The Aeneid versus Christ’s parable, which boils down to the character of the Father. In the parable, the Father reconciles desire and duty, while in The Aeneid and Hamlet, Fathers deepen the divide between them. In the epic and the play, Fathers reappear at critical moments to condemn desire and reorient the men to duty. Jove sends Mercury to order Aeneas to leave Carthage and sail to Italy, and the ghost of Hamlet’s father haunts a heated conflict between Hamlet and Queen Gertrude, reminding the frenzied prince to obey what has been laid upon him. Fathers denounce their sons’ desires and insist upon obedience.

In contrast, Jesus never condemns desire in the story. In fact, the parable ends with a feast, hosted by the Father, which the Older Brother, not the Father, rejects. As the Prodigal returns to his duty, so the Older Brother is invited to desire, thus reconciling both variations of the fractured Image of God. In the parable, the link between duty and desire is repentance. To be reconciled to the Father the Prodigal must repent of neglecting his duties, but the Older Brother must repent of a sin just as grave: killing his desires. After all, without desire, a feast is just a meal, and the image remains distorted.

However, as every Older Brother knows, repentance is the rub. Older Brothers prefer great quests that earn the Father’s approval. Repentance robs them of their ability to control their destinies. In Hamlet and The Aeneid, demanding Fathers validate and intensify the fallen divide between duty and desire, but the truer story is the parable, in which the good Father reconciles the son to desire through repentance.

Furthermore, the larger Christian story ends with a wedding. The consummation of the Christian life is the union of duty and desire, embodied to us in this world in the sacrament of marriage. In marriage, my desire for my beloved becomes my duty, and my duty is to desire my beloved. Thus, the deaths of Ophelia and Dido are the dark moments in which we lament that there will be no reconciliation of duty and desire for Hamlet or Aeneas, and the Divine Image will remain broken in their souls, even when the quest is conquered. When Hamlet so poetically proclaims that death “is a consummation devoutly to be wished,” he correctly identifies that the tragedy of the Older Brother is the rejection of desire. If nothing remains but to fulfil a violent duty to a dead father, then death, not marriage, is the inevitable consummation. It all comes down to killing Ophelia.

Stories rise to greatness insofar as we find our humanity in them. Hamlet and The Aeneid explore what it means to be Older Brothers when duty and desire remain unreconciled. In the epic and the play, demanding Fathers require the death of desire. In the Christian story, however, the Father offers reconciliation. The redemptive life and work of Christ reconciles all things so that the Father can say to the Older Brother “All I have is yours.”