Justice and Mercy in Crime and Punishment

Editor's Note: Welcome to the first installment of a new weekly column from our friend Adam Andrews. The column is called "Ex Libris with Adam Andrews," and we begin with Dostoevsky. 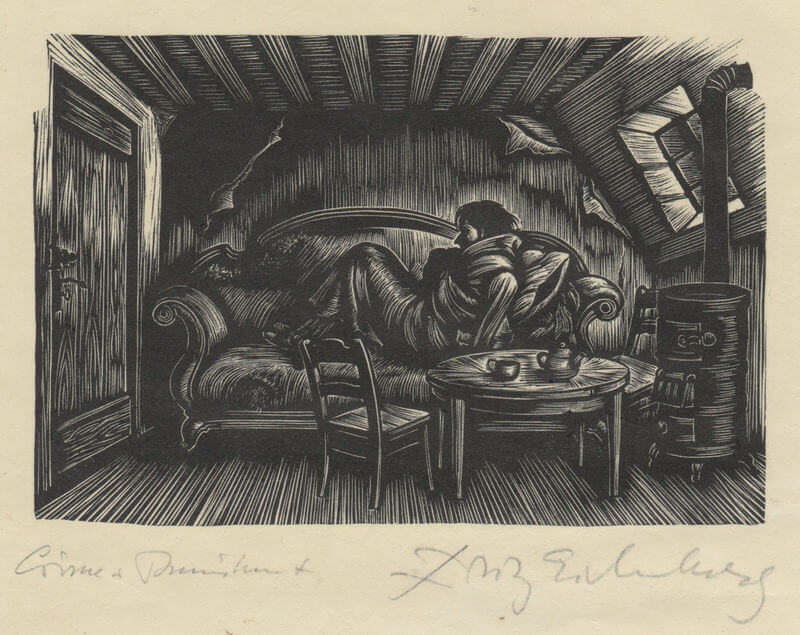 You get what you deserve. That’s the way it is supposed to work, and that’s the way I like it. That’s what I discovered about myself this last summer while reading Crime and Punishment. I also found out that for a spine-tingling, hair-raising psychological murder mystery, you can’t do better than Dostoyevsky.

Crime and Punishment is the story of Raskolnikov, a young philosophy student whose atheism has convinced him that the law does not apply to the chosen few whose destiny is to lead society. He even writes a paper defending his views, arguing that members of this special class (to which he himself belongs, of course) must be willing to flout traditional morality in order to pave the way for a better future.

Raskolnikov acts on his theory in the first few chapters of the book, committing a brutal double murder and getting away unnoticed.

Almost immediately, the psychological implications of his act begin to plague him. He finds that justifying his actions based on his philosophical creed is more difficult than he had anticipated.

To make matters worse, the cops are on his tail. The chief detective investigating the murders seems to suspect him. Repeated interviews with this detective leave Raskolnikov in a desperate state of anxiety. The tension is unbearable, and Raskolnikov is soon a psychological mess.

I read the story at a gulp, with my heart in my throat, and looking back on the experience I realize why it was so engrossing. Simply put, I wanted to see Raskolnikov get caught. I wanted to see Dostoyevsky make a grand statement about the immutability of justice. I wanted him to say “You cannot deny the laws of God and get away with it. A thing is what it is, and murder is wrong. It brings its own consequences, regardless of human theories.”

I would have left the story with this very idea had it had not been for Sonia, a poor girl whom Raskolnikov befriends early in the story and with whom he corresponds throughout.

Her situation is as bleak and desperate as you can possibly imagine. The daughter of a drunken ne’er-do-well, she is forced into prostitution by her own parents in order to pay their living expenses. Little more than a child, she is terrified, miserable, and despondent throughout the story.

And yet, she turns out to be one of the most powerful characters of all, because she loves Raskolnikov. She knows that he is deeply troubled, but she doesn’t know why. As she gently probes him in a series of conversations, his need for confession becomes overwhelming. Finally, Raskolnikov confesses his crime to Sonia.

As I read this scene for the first time, I could hardly contain my glee. Here it comes, I thought. He’s finally going to get caught. All scores will be settled, all scales will balance, Dostoyevsky will make his point.

What a great novel, I thought.

But Sonia’s response laid waste all my assumptions.

It is worth quoting briefly:

“What have you done – what have you done to yourself?” she said in despair and, jumping up, she flung herself on his neck, threw her arms around him, and held him tightly. “There is no one – no one in the world now so unhappy as you!” she cried in a frenzy, not hearing what he said, and she suddenly broke into violent hysterical weeping.

“Then you wont leave me, Sonia?” he said, looking at her almost with hope.

This is a devastating passage, most powerful to me because of what it lacks: namely, justice and judgment, a getting what one deserves.

My own judicial view of the world – a world of right and wrong, of guilt and innocence, of deserving and punishing – is completely absent from Sonia’s response. Instead, her outburst suggests the existence of a different world altogether – a world of compassion and empathy, of suffering and relief, of relationship and love. She takes on Raskolnikov’s misery as her own, his bondage as her own, and his destiny as her own.

Both worlds exist side by side in Dostoyevsky’s novel, and his characters have the power to call them into being by the words they speak to each other. Raskolnikov, by his atheistic arrogance, has called into being the world of judgment and justice. Sonia, by embracing him in the midst of his wretchedness, calls the other world into being just as truly.

Amazingly, Sonia sees Raskolnikov as a sufferer, not a villain. She sees his need for relationship, not for justice. She embraces his misery for herself. And in the end, though he has done everything in his power to alienate himself from the world and from all people, he is not alone. The two of them find fellowship in suffering.

The world of justice, debt, and payment can never accomplish this kind of fellowship, Dostoyevsky seems to say. Only in the other world, the world of empathy and relationship, can we hope to find it.

I realized last summer that Sonia is a better man than I am. Her response to the suffering of the world around her – the self-forgetful, empathetic embracing of her neighbor – is nowhere in my heart.

What I find instead is a lot of Raskolnikov. With my every word, I call into being a world of justice and judgment, and it causes me to imagine, like he did, that people are graded on some scale of worthiness, and that those on top owe nothing to those below.

Maybe, though, like Raskolnikov, there’s hope for me in the end. Maybe I am not beyond help. Maybe, if I can realize that this arrogant presumption of mine (and the little murders that it continually leads to) are really a kind of suffering, and that I am to be most pitied – maybe then I’ll be open to empathy when it presents itself. Maybe then I’ll understand the Cross and the hope of succor that it offers me. Maybe I’ll be able to see Jesus in Sonia’s embrace, and hear in her words His invitation to fellowship: “Oh, how miserable I am! I will never leave you!”

Maybe in the end I won’t get what I deserve after all.