Julius Caesar and the Art of Rhetoric 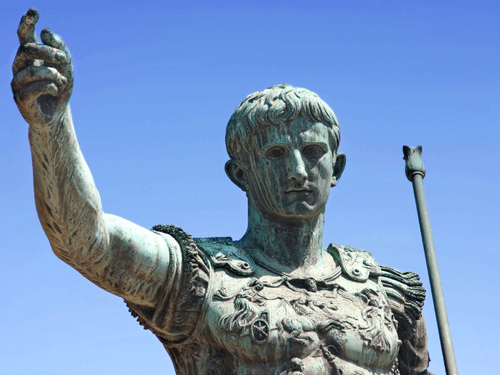 Initially, my understanding of rhetoric was that form of communication recognizable as the stuff of politicians. It is the soundbite, the non-answer, the slogan. Rhetoric was the campaign slogan said over and over again as a response to any question, be it about immigration, foreign policy, taxes, education, the economy, or agriculture.

Then, I came to understand that whatever those were, they weren’t rhetoric. Sophistry, maybe. Some sort of reduced form of rhetoric, maybe. But not rhetoric.

So, I realized that rhetoric was something bigger than that. It is persuasion, but not just any persuasion. It is persuasion toward the truth (maybe even toward the true, the good, and the beautiful). I reasoned, particularly because of some rather brilliant students who were working through this with me, that the tools of rhetoric include the topics of invention. Thus, the only way to persuade someone toward something that is untrue (or un-beautiful or un-good), was to fail to use the topics properly; that is, to not defining terms, comparing terms, identifying circumstances or relations or authority correctly. To fail to do so was to not be doing rhetoric in the same way that using a screwdriver as a hammer is not to screwdrive.

More recently, after conversing with others, looking at the role of rhetoric in books like Homer’s Iliad, and contemplating the art itself, I’ve come to agree with Andrew Kern that rhetoric is better defined as “the art of decision-making in community.” The beauty of this definition is that it includes all of the best from other definitions (ability to persuade, persuasion toward truth, etc.), and it brings it into unity with the other great liberal arts of the trivium: grammar and logic, as well as with the quadrivium’s harmony. For what can be more harmonizing than helping a community make good decisions?

What intrigued me most, though, is how I saw the characters of Shakespeare’s Julius Caesar through the lens of each of these understandings of rhetoric. Ask the question: Who is the best rhetorician in Julius Caesar?

If rhetoric is persuasion? Cassius and Marc Antony are the only rhetoricians who succeed at persuasion.

If rhetoric is persuasion toward truth? Brutus? If you see him as a good guy. Portia? Marc Antony? If you see Caesar as the good guy. The former two, however, are unsuccessful. Only the latter succeeds.

Of course, you necessarily want to ask the question: Which view of rhetoric did William Shakespeare intend?

What if, though, Shakespeare was thinking about all of these definitions? What if he had experienced soundbite, slogan-based communication in his day? Socrates did, why not Shakespeare? What if he saw rhetoric being used to persuade toward any end or toward the truth, but without the community being a part of that communication? What if he desired rhetoric to be a community-based enterprise? Who knows, really? Maybe he saw all of those things, and maybe he desired the latter. Maybe all of that is true, but he wasn’t really thinking, consciously, intentionally, about them when he wrote the play. Maybe all of that is true and deep down inside, in his bones, he felt that rhetoric was decision-making in community but never thought about it consciously, never articulated it in so many words, never put it to words intentionally, yet that feeling worked its way from his bones to the characters?

I suppose it may not matter in the long run. What is incredible, though, is the way I get to interact with the play on so many levels because of how I think about rhetoric. Maybe the play’s the thing wherein he’ll catch my conscience? Maybe the play holds a mirror up to nature that reveals something about me, the reader, to me. In that sense, Julius Caesar is still working on me, still engaging me, still humanizing me. What more do we want from a great book? What more do we want from the liberal arts?