The Inconsolable Secret and the State of Men 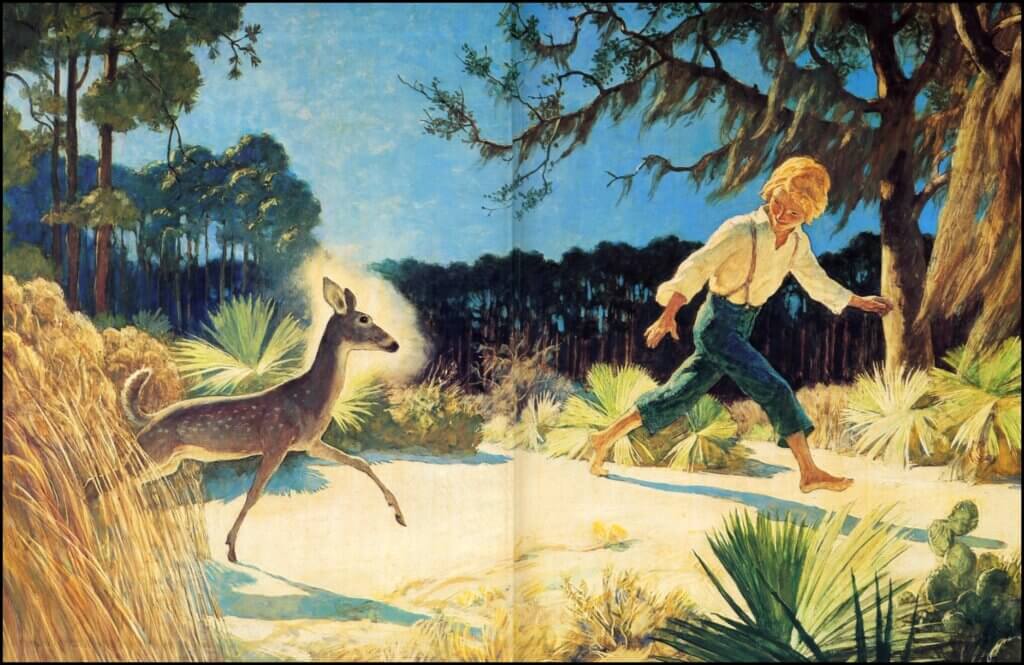 In 1939, Marjorie Rawlings helped a whole nation of readers imagine that they were young country boys just coming of age. Her Pulitzer Prize winning novel The Yearling told the story of Jody Baxter, whose family ekes out a living in the central Florida scrubland of the late 19th century. Jody’s loss of innocence and search for friendship gave America a glimpse of its own struggle to survive the Great Depression and find fellowship in the midst of suffering. It resonates today with the same power, regardless of our country’s changing circumstances.

Jody spends much of his time alone, and the story recounts his search for a friend, someone or something “with some dependence to it,” as he poignantly says. He is repeatedly frustrated in this search, as time and hardship remove likely candidates, one by one, from his life. Jody finally fixes his hope on a fawn, Flag, the orphaned yearling of a doe shot by his father. Jody invests Flag with all of his hope and yearning, making the fawn a symbol not only of Jody’s youth and innocence, but also of the quiet desperation that loneliness engenders.

Jody’s longing for relief from solitude reminds me of a good many young people I know. My two daughters are college-aged, and I have come to know many of their friends. Most are unmarried, and each of them struggles mightily with loneliness, despite the fact that they are surrounded by family and friends. One described her mental state to me as one of “listless melancholy, interspersed with nagging panic,” explaining that she fears the expected fulfillment of a good life that she has been banking on since childhood is passing her by, and she is missing her chance at happiness.

“He would be lonely all his life,” Rawlings tells us. This is the lot of man in this world

I observe a similar anxiety among their male friends, many of whom feel the same unnerving sense of frustration at a life not yet started. One of these, a 24-year old, told me honestly just the other day that he despairs of finding a meaningful purpose for his life.

I have been tempted to conclude that singlehood is the root of this problem, perhaps because the sufferers I mention all have that in common. I was surprised, though, to discover my daughter’s newly married friends battling the same loneliness reported by their single counterparts.

That seems to narrow it down, I thought. If neither gender nor singleness explains this problem, perhaps it is just the age. Caught in between the certainties of childhood and the stability of mature adulthood, 20-somethings are prone to anxiety, insecurity and loneliness regardless of their circumstances. Maybe the problem is that they are just like Jody Baxter, losing their grip on the security of childhood but unsure of what the next stage will bring. Surely they will eventually come of age and grow out of it.

But such a facile explanation will not do, of course. As I consider my own situation, or that of my wife, or my friends whose families are raised and who dandle grandchildren on their knees, I find the same lurking loneliness, the same uneasy doubt of a peaceful future. We do not grow out of loneliness; it is a feature of life in this world.

If a species of trouble applies to all regardless of sex, age, or situation, shouldn’t we stop looking for its causes in transient circumstances? Must we not eventually conclude that such trouble comes from within the human heart instead?

Obviously, part of the anxiety that my young friends struggle with is specific to their place in life and their stage of development. But in another sense, it is common to us all. It reminds me of the “inconsolable secret” that C. S. Lewis described in his 1949 essay “The Weight of Glory.” We are born of another world, beyond time; we long for our eternal home with a longing that cannot be satisfied this side of heaven. No fellowship, no intimacy, no human fulfillment can ever slake the thirst for belonging that originates in our transcendental home.

I wish my unmarried friends could learn the truth of this burden before they approach the altar. I hope they learn better than to burden marriage with such unrealistic expectations; for human love, blessed by God, was never more than a metaphor for its Divine original, which we only tastefully in relationship with Him.

What is a Classic, Anyway?

The best literature teachers rely on classic books, but how can you tell a classic from a non-cla

Jody Baxter learns something like this in the final chapters of The Yearling. He manages to endure the hardships of his situation without despairing until those hardships threaten Flag’s life and his own tenuous hold on the safety of childhood. Forced to trade his carefree innocence for the responsibilities of the man of the house, Jody counts the cost: “He would be lonely all his life,” Rawlings tells us. This is the lot of man in this world. As Jody’s wise father intones, “I’ve been uneasy all my life. But a man takes it for his part and moves on.”

The Yearling encapsulates the inconsolable secret of Lewis’s essay: we are all alone, regardless of our circumstances. We long for an embrace from beyond the world, and there is no earthly love or security that can provide it. In the end, though, we share this fate with all our fellow men, and in this strange, universal fellowship, there is peace.