Britten's "This Little Babe" offers poetic and musical metaphors that rouse our wonder at the Incarnation's paradoxes--particularly the paradox that our warfare with sin and Satan testifies to our peace with this God-man. 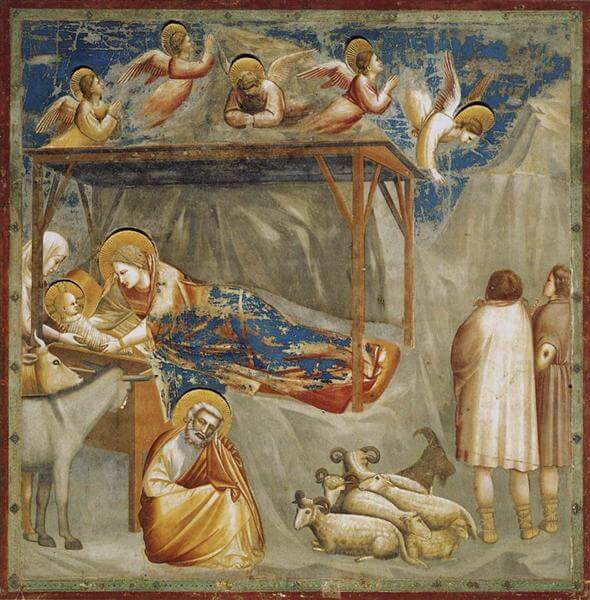 It is nearly Christmas. Has any drama of history stirred as much music and poetry, art and imagination, as the stable-birth we celebrate this day? The ancient world could never stop chanting of the battles of Troy; but it is the Incarnation that has filled the mouths and hands of artists ever since Christ’s birth. Of all this abundance, Benjamin Britten’s “This Little Babe” occupies a mere minute-and-a-half. Yet in that breath of time, it offers musical and poetic metaphors of the Nativity that press listeners to wonder and worship at the paradoxes of the Incarnation.

“This Little Babe” forms part of A Ceremony of Carols, a unique work of Benjamin Britten (1913-1976), who, though he lived in a time of musical experimentation, drew much of his own inspiration from the classical repertoire, British folk music, literature, and social issues rather than the abstract musical principles that fascinated contemporaneous composers. His Ceremony, while not following a traditional liturgical form, combines liturgical elements to create a form of its own—one that has become familiar to many as the piece has been enfolded into the choral Christmas tradition. In it, a processional and recessional based on the Gregorian chant “Hodie Christus natus est” bookend eight “carols”—musical settings of fifteenth- and sixteenth-century English poems—with a harp solo near the middle. “This Little Babe” is the fifth carol, closing the first section before the harp interlude.

Its text is part of the poem “New Heaven, New War” by sixteenth-century English Jesuit poet Robert Southwell (1561-1595). A predecessor of metaphysical poets like George Herbert and John Donne, Southwell’s poem catalogues the panorama of the nativity, from the divine Baby’s human trembling and tears, to the stable’s crumbling walls, to the hay-filled manger and surrounding shepherds; but, belying the strains of “Silent Night” we’d usually associate with this scene, Southwell matches each element to a martial metaphor—shocking readers with the recognition that this nativity marks God’s entry into battle with Satan, and that our own souls are summoned to join His fight:

This little babe, so few days old,
Is come to rifle Satan’s fold;
All hell doth at his presence quake.
Though he himself for cold do shake,
For in this weak unarmèd wise
The gates of hell he will surprise.

With tears he fights and wins the field;
His naked breast stands for a shield;
His battering shot are babish cries,
His arrows looks of weeping eyes,
His martial ensigns cold and need,
And feeble flesh his warrior’s steed.

His camp is pitchèd in a stall,
His bulwark but a broken wall,
The crib his trench, hay stalks his stakes,
Of shepherds he his muster makes;
And thus, as sure his foe to wound,
The angels’ trumps alarum sound.

My soul, with Christ join thou in fight;
Stick to the tents that he hath pight;
Within his crib is surest ward,
This little babe will be thy guard.
If thou wilt foil thy foes with joy,
Then flit not from this heavenly boy.

Britten’s musical setting reinforces these poetic paradoxes with corresponding musical juxtapositions. As in the rest of the Ceremony, a solo harp accompanies the choir; but in “This Little Babe,” the soothing strains we associate with harps are replaced by pulsing chords that mimic the trumpet “alarum” of the third stanza. The martial metaphors are declaimed, not in the deep men’s voices one might expect, but in the piercing fragility of a boys’ or women’s choir.

Moreover, Britten juxtaposes the simplicity of Southwell’s rhyming couplets to an intricate melodic setting. The first stanza is sung in unison, all voices sharing one melody. The second stanza, however, breaks into a two-part canon. In a canon, one grouping of voices or instruments will begin a melody, and then second and subsequent groupings will start the same melody a few beats later and possibly on a different starting note. (Think “Row, Row, Row Your Boat,” which is a round, or a simple form of canon.) In the third stanza, the canon expands into three parts—three different groupings of voices starting the same melody at three different times. The cascading effect this creates is heightened by Britten’s use of stretto, meaning that each group of voices enters almost instantly after the previous one. Finally, for the fourth stanza, all the voices again share the melody—but this time in harmony rather than unison, concluding in a subtle yet stunning shift from the minor key to its relative major key in the final two lines prophesying the heavenly boy’s victory.

Don’t forget, also, the overarching juxtaposition that all of this complexity occupies less than two minutes. Listen for it here:

Perhaps the most startling paradox of “This Little Babe,” captured in both words and music, is the forcefulness of the martial imagery describing the event that was supposed to hail “Peace on earth, goodwill to men.” It’s a familiar tension of our experience of Christmas that, somehow, this celebration at which we most long for comfort, fellowship, harmony, security, rest, abundance, and joy often collides with our sharpest confrontations of grief, loneliness, discord, vulnerability, agitation, lack, and dismay—each of these, in their painfully particular ways, confrontations with sin and sin’s curse, death. And perhaps, wearying of the yearly disillusionment, we finally retreat before sin’s last offensive, despair, and conclude that the promised peace was at best a metaphor, at worst a lie.

Perhaps the martial imagery and rhythm are so compelling in “This Little Babe” precisely because its composer and writer felt the heat of the fight. Britten composed the music while traveling from American to England in 1942, under constant threat of German U-boats, while Southwell spent his decade of ministry as a Catholic priest during the foment of the English Reformation and was at last killed by hanging, drawing, and quartering.

But what peace comes without being won? And what if that little Babe came to win it—breaking our truce with the devil, by which we’d won such deceptive respite, and calling us to His side of the field? What if peace with God does, in fact, mean fighting with sin, and confronting Satan himself?

Theologian Oscar Cullmann famously compared the Christian life to the stretch between D-Day and V-Day: victory assured, but still being accomplished. If this Christmas finds you embroiled in the skirmishes against sin and fear and weakness and death, take heart. The battle itself testifies that your soul has joined with Christ in the fight: now, in the lovely old words, stick to the tent that He hath pight. Within His manger you’ll find safe ward, for He Himself will be your guard—that little Babe, heavenly Boy, by whom at last you’ll foil even these foes with joy.