I Am The Passenger: Reflections On The Holy Unholy 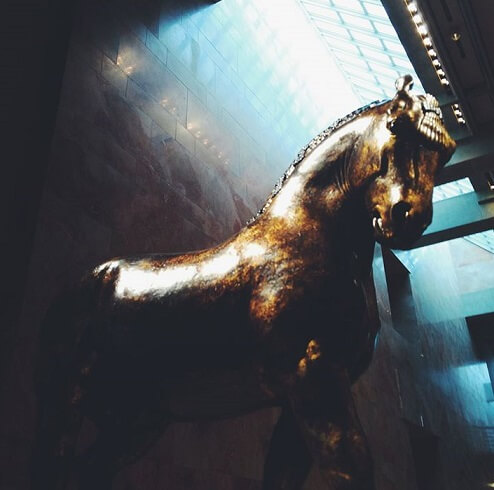 This week, I am leading more than thirty sophomores to New York City. I hope nothing goes wrong. My students, on the other hand, hope something does go wrong. I understand this hope.

Little children do not understand that something can “go wrong” on a trip. Teenagers do, though. They sense that a trip where everything goes right is not much of a trip at all. A trip, like a story or a man, must slip free from the ugliness of inevitability and enjoy a little freedom. What freedom is this? A missed connection, a lost wallet, a sprained ankle, a power outage, a smoking engine, a night spent on an airport floor are all proof that the trip has become self-aware, recognized us, and has other intentions for us.

When something in a trip goes wrong, our prayer for something other than a vacation is answered. Without something to contemplate, the vacation becomes disappointingly banal. Granted, two weeks on the beach sounds lovely, but how many times have I exhausted myself early in the summer through sumptuous living? By the Ninth Day of Christmas, my senses are often too spent to respond. I return to work with that old cliché about “a vacation from this vacation” on my lips.

As a chaperone, I am hoping against a lost wallet or sprained ankle, because suffering is not the only way to save a vacation from the final dullness of curiosity and raw sensuality. In the last several years, an increasing number of educators have spoken of “classroom liturgies,” thus borrowing from the power which a Church liturgy has over man’s imagination. This is a happy development for classical education, provided the boldness of the “classroom liturgy” remains intact. The classroom liturgy does not look like a Church liturgy the way that “that cloud looks like a rabbit.” Rather, the liturgy of the classroom is the same liturgy as that of the Church, for the Church is generous and willingly teaches the power of the liturgy. We may speak of “classroom liturgies” provided we don’t hedge our bets with, “But it’s not a real liturgy.” In a sheer physical sense, a church building beautifies public space, but this is not the only beatification the Church indiscriminately offers the public. The shape of Church liturgies might be borrowed for the structures of a novel, a musical composition, a town hall meeting, a dinner party, a dedication. Doing so does not “call common what God has called sacred,” but creates a religious society, a society filled with minds apt to interpret the world from a position of piety, and to create with a sense of piety. The classroom liturgy does not rob from the Church liturgy; the classroom liturgy re-establishes the beauty and viability of the Church in all places.

These claims depend upon a non-binary view of the Holy and the Secular, however. Neither Christian cosmology nor Christian metaphysics allow the Holy and the Secular to be separated from a vast chasm. While the Righteous and the Damned are separated by such a chasm, the Holy and the Secular are friends, even sisters. All things are simply varying degrees of Holy. In Solomon’s temple we find a Most Holy Place, then a Holy Place… and yet the Heavens above the temple declare God’s glory, and the Earth outside the temple is God’s footstool. A Detroit McDonald’s might lack the full moon holiness of the Hagia Sophia, yet it maintains the waxing crescent holiness which affords it the divine dignity of mere existence.

In New York, little of what we have planned to see could be called holy without a long explanation. New York is hardly Damascus, and venerating the bones of St. John the Baptist is not on our itinerary. We are going to the Metropolitan, Lincoln Center, the Cloisters. We will hear Haydn, Mozart, and see Rembrandt and Titian and Klimt. We will also visit Le District for dinner, and I might conspire with a few others to buy a little Parma ham. Even if I acknowledged some deep chasm between the Holy and the Secular, yet I would be hard pressed to call the things we will see in New York “secular.” High culture is the Holy Unholy. The Guggenheim, Debussy, Gruyère de Comté… while these do not occupy the same category of being as Notre Dame cathedral or the Shroud of Turin or Communion wine, neither would I trust a man who shrugged off the Metropolitan as “just another building, not unlike a condominium, a jail, or an outhouse.” National culture is also the Holy Unholy. Yankee Stadium, Thanksgiving, the Pledge of Allegiance… while some Christians see civil religion infringing upon the sanctity of the Church, the Pledge is more apt to broaden and deepen the soul than hijack piety. As someone who formerly made rather free use of “civil religion” as a rather nasty accusation, in hindsight I should confess that the “religious” quality shared between, say, the 4th of July and the Feast of St. George always seemed real, but entirely unimposing. We give “double honor” to elders, and single honor to parents; the honor we give parents need not rob the additional honor we offer the clergy. Honor the Earth, give double honor to Heaven. Honor the State, give double honor to the Church. Honor the highest reaches of secular culture, and afford double honor to Easter, Christmas, the Nicene Creed, the Eucharist. The good life does not contain religion, but is generously, vaporously religious at all times. Eating religiously, drinking religiously, a religious devotion to music, and charity, and fashion. Of course, we are finite, limited, and there are not enough hours in the day to do all things religiously, although Western man has a long way to go in lifting himself out of the mire of doing all things atheistically.

We are not going on a pilgrimage to New York, but neither are we going on vacation. While I hope nothing goes wrong, I hope our trip is a genuine disruption of the normal run of things, a lifting up from the typical, mundane dregs of the secular, which is where most people spend their lives. New York cannot offer The Word, but the best of New York can enrich the soil in which the Seed is planted. I am going to New York as though to a cathedral of culture. I go to listen, not to speak; to learn, not to teach; to muse, not to be amused; to gaze, not to glance; to wonder, not to be curious; to absorb, not to criticize. I am the passenger, not the pilot.