How Can I Raise My Grade In This Class? 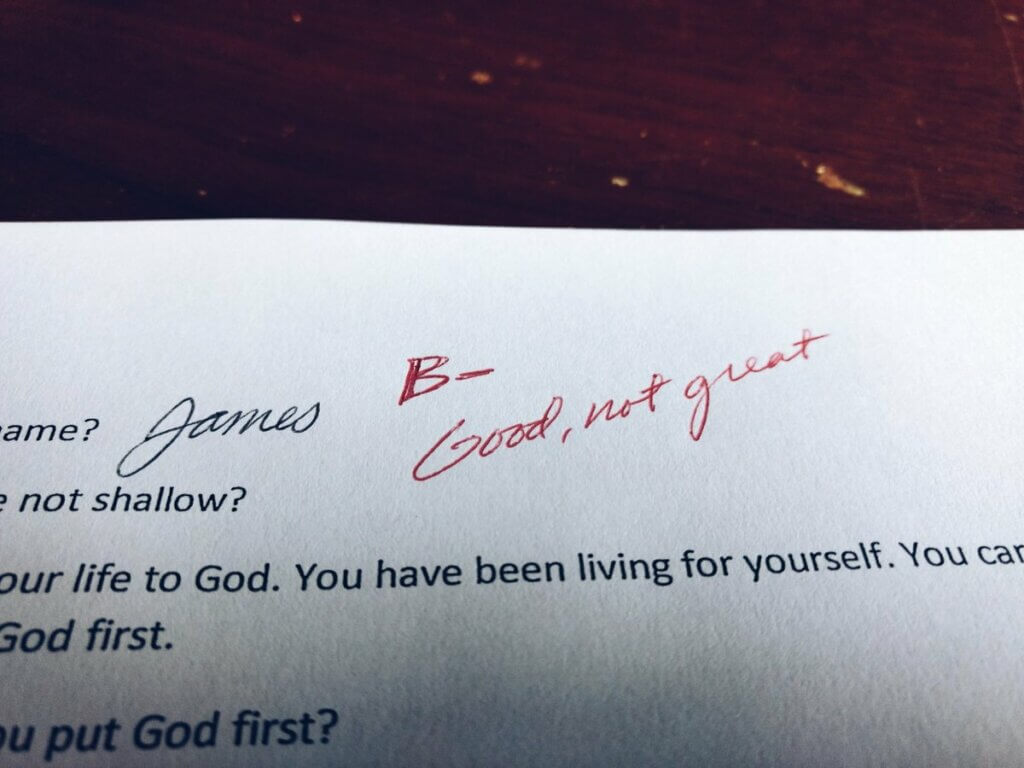 Student: I wanted to talk with you about how I could raise my grade in this class.

Teacher: You could always get higher scores on your quizzes and tests.

Student: Very funny. How can I get higher scores on my quizzes and tests?

Teacher: A couple things come to mind. You could always cheat on your tests and quizzes, or you could get your parents to offer me a bribe.

Student: Are you serious?

Teacher: Are cheating and bribery not classic, tried-and-true ways of getting high grades?

Student: Sure, but I don’t want to cheat.

Student: Because cheating is wrong, and I might get caught.

Teacher: That’s an interesting response. What do you mean when you say you “might get caught”?

Student: I mean someone might catch me cheating and then I would get in trouble. At best, I would get a zero in the class. At worst, I might get kicked out of school.

Teacher: You don’t have much faith in your ability to get away with cheating.

Student: But even if I got away with it, I still wouldn’t have the knowledge which the grades represent.

Teacher: That’s a rather pious sounding thing to say to a teacher. At what point in the future is anyone going to demand you know anything about Dante or Augustine?

Teacher: No, it’s not. It was a trick question.

Teacher: We read Dante and Augustine, but you might have noticed by now that my tests and quizzes don’t require you to regurgitate a bunch of rote facts about Augustine’s life. I am not asking you about the year Augustine was born. I am not asking you whether Dante was a Guelf or a Ghibelline. There aren’t any multiple-choice questions on my tests. If there were, we would not be having this conversation, because you would have a perfect score in this class. You would cram for my tests, get every question right, and already be quick on your to forgetting everything you studied.

Teacher: What do you mean when you say my tests and quizzes are subjective?

Student: Just what you said a moment ago. You never ask, “When was Dante born?” You never ask, “Who crowned Charlemagne emperor?” There are never any questions like, “Lay out five Constantinian reforms and describe whether they worked or not.” Instead, you ask questions like, “If a man from our day believed Constantine was the greatest emperor who ever lived, could he be happily married to a woman who believed HRE Charles V was the greatest emperor who ever lived? Quote CS Lewis twice in your answer.” And then you give me an 85% on my essay, write nothing in the margins, but say at the top, “Good, not great. Nothing terribly surprising here. Kind of zeitgeisty.” How is that not completely subjective? Am I just here for your amusement?

Teacher: How is asking what year Dante was born any less subjective?

Subject: Are you kidding? Are you some kind of relativist? Dante was objectively born in a certain year.

Teacher: Of course, he was. He was objectively born in a certain year. But asking on a test what year Dante was born is a different matter. In putting the question, “What year was Dante born?” on a test, the teacher is subjectively deciding the year that Dante was born matters, and that it matters a lot. The teacher is also subjectively determining that the kind of questions which ought to appear on tests are the kind of questions which Google and Wikipedia can answer. The teacher could ask other questions about Dante. Why ask about what year he was born?

Student: Are you saying it doesn’t matter when he was born.

Teacher: No. I’m saying it is not a terribly helpful question to ask on a test.

Teacher: Do you know what year he was born?

Teacher: Are you planning on getting married? Having kids?

Student: Yes, but what does that have to do with math?

Teacher: When you realize too late that you’ve married a woman who disagrees with you about how children ought to be disciplined, then how will math help you solve that dispute?

Student: I will use statistics to prove my point.

Teacher: And will math help you hold your temper when she tells you she doesn’t care much for statistics?

Teacher: Most people who hold their tempers well would disagree with you. And you’re looking a little flustered right now, anyway.

Student: That’s an awfully cool remark from someone who doesn’t know when Dante was born.

Teacher: Pretty much nobody knows the exact year Dante was born off the top of their head. But if I don’t know the year Dante or Augustine was born, I look it up. In the last ten years, I’ve read a lot about Dante. I’ve read different introductions to the Comedy. I’ve read essays online. Excerpts from books about him. Pretty much everything I’ve ever read about Dante mentions the year he was born, and after I read it, I can remember it for a few days. But after a week it usually fades. In another twenty years, I’ll wager that I have encountered the year of his birth often enough that I’ll know it off the top of my head. That’s how I know the year the Peace of Augsburg was signed. It’s how I know the years of the English Civil War. Back in high school, I took a test on the Reformation and was asked to know the year the Peace of Augsburg was signed. I got it right. I promptly forgot it. I’ve forgotten it many times, in much the same way I’ve forgotten the year Dante was born.

Student: This sounds awfully bleak. All the time I spend memorizing facts and equations in school is wasted?

Teacher: Allow me to let you in on a little secret from the world of adults. After you graduate from college, you pretty much never have to memorize anything for the rest of your life. Since I graduated college at the age of 22, no one has ever asked me to memorize anything. I had many jobs before I became a teacher, too. I delivered pizzas. I worked as a bank teller. I was a night watchman. At no point after graduation has anyone ever said to me, “Memorize this.” What people tell you is, “Write this down,” but no one in their right mind says, “When you’re entering the security code to lock up the store at night, you may not look at your notes.” Of course, you end up memorizing that security code, but not by studying it. How do you it?

Student: I don’t know. How?

Teacher: The same way Mr. Smith memorized all the equations and formulas he knows. Through repetition. He’s been using those equations and formulas for thirty years. Same thing with that security code. You use the code every night for two weeks, and by the third week, you don’t need to look at the scrap of paper you wrote the number on. Of course, most teachers are simply working through their material too quickly to allow students to memorize anything naturally, through repetition. Instead, they tell you, “Go home and memorize the Gettysburg Address. You have to know it word for word by next week.” But the student knows the Address isn’t that important. If it was important, the teacher would spend more time on it in class. Important things get time. Unimportant things are brushed over.

Student: But there’s a lot to know. You have to go through it quickly or you won’t cover it all.

Teacher: The history teacher you had in 8th grade gave a lot of tests where you had to know names and dates and years, didn’t he?

Student: Yes. Mr. Daly’s tests were easy, predictable. I could actually study for them. They were great.

Student: I would need to study for them, but I could pass them again.

Teacher: Why would you need to study for them?

Student: Because that information is not all easily accessible in my head at the moment.

Teacher: How long would it take you to commit that long list of Assyrian kings to memory?

Teacher: I could probably do it in an hour, too, and I never wasted my time “committing it to memory” back in 8th grade. All of which means the time you spent “memorizing” the list back in 8th grade was actually wasted. So you could waste more time “memorizing” it now, or you could just look it up when you needed to know it, and if you needed to know it often enough, eventually you would commit it to memory through repetition.

Student: Did you just accuse me, a student, of wasting his time by studying for school?

Student: Are you willing to tell me how to get a better grade in your class?

Teacher: I’ve already begun telling you. This was your first lesson. You did decently well, but not great. There might be another lesson sometime in the future.

Student: How was this a lesson on getting a good grade?

Teacher: You taught yourself the lesson, actually. You connected my class with anything at all outside of my class. You don’t have to be here right now.