How to be “Someplace” at Home 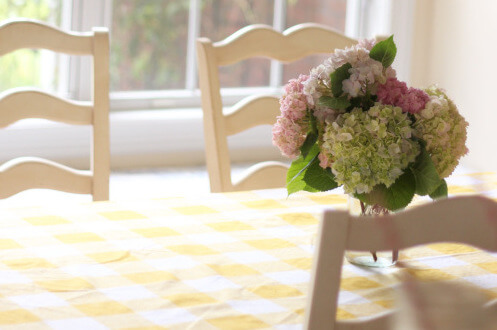 For those who have given themselves to creating homes of beauty, there sounds a complementary call to hospitality.

Were we to give ourselves solely to the creation of homes, without also giving ourselves and our homes to hospitality, then there might be some weight behind the charge we may hear from those who do not value the home, or even from our own restless hearts—the charge that to pour so much into a home is isolationist, reactionary, selfish, and that it over-values what is earthly and transient.

But hospitality, in all its many forms, gives the lie to such accusations. It simultaneously affirms that the home ought to be a place of shelter, of protection, of earthly treasuring, separated from the world at large; but also that it ought to be open to the world—not to become like it, but to bring otherworldly consolation and conviction to it, in a balance that echoes the lovely refrain by which W.H. Auden captured the essence of community: “In solitude, for company.”

Hospitality is not one option among many for the uses of a home, but part of its essence. It encompasses inviting others for carefully-prepared meals and welcoming the last-minute request for a cup of tea and listening ear; it includes the intimacy of a family dinner and the openness of house-concerts and bonfire nights; it may be as brief as someone “just stopping by” or as long as a displaced family needs to find new shelter. In these and all its other forms, hospitality reveals the true nature of the home to both dweller and guest.

Hospitality ushers the home to its place in high tradition. The Scriptures redound with accounts of hospitality: Abraham’s feasting of the three angelic travelers, Abigail’s supplying of provisions to David, Peter’s mother serving Jesus just after her healing, Zacchaeus entertaining his motley crowd, the father killing the fattened calf for his prodigal son, to name but a few. By contrast, poor hospitality is a chief offense of Sodom and of the Pharisees. Ornate rituals of hospitality grace the pages of the epics as well; the Odyssey recounts Telemachus’ welcome by Nestor and Odysseus’ rescue and reprieve by Nausicaa (contrasted with the suitors’ violation of hospitality), the Aeneid exalts Dido’s hosting of Aeneas, and in Paradise Lost, hospitality replaces military prowess as the main heroic action in unfallen Eden. From these founts the streams of hospitality flow continually through the pages of literature and history, consistently symbolizing the noblest moments of civilization.

Hospitality offers the home to the work of God in the world. That our Lord chooses the home as a central theater for His work is testified by the fact that He commands hospitality. Among the apostle Paul’s Romans 12 outline of a full-orbed Christian life is the imperative, “Contribute to the needs of the saints and seek to show hospitality.” A life of hospitality is among the qualifications for both elders of the church and widows receiving church support in 1 Timothy. And the author of Hebrews exhorts, “Do not neglect to show hospitality to strangers, for thereby some have entertained angels unawares.” Those who participate in the making of a home, and and especially those who take this as their primary work, may sometimes feel that their labor is insignificant, unspiritual, reaching few—when it is in fact at the center of obedience and mission.

Hospitality presents the home as a costly gift. To welcome guests demands time, labor, money, thought, and one’s own self, both before, during, and after any particular event. But this expenditure has the potential to honor and fulfill, rather than demean and exhaust, both those who give and those who receive it. Modern life provides very many opportunities for faceless giving and receiving, but the gracious gifts of a host and their gracious acceptance by a guest restore to us the sense of the exchange of spirit mediated through things, and not merely the commodified things themselves. Hospitality need not always empty the wallet or fill the to-do list for a week in advance, but if it carries no cost or inconvenience, it will likely carry little meaning either. David “would not offer to the LORD that which cost him nothing”; the principle of hospitality is the same.

Hospitality transforms the home into a place of both shelter and strengthening. I cherish the images of Edmund Spenser’s House of Holiness, John Bunyan’s Palace Beautiful, J.R.R. Tolkien’s Rivendell, C.S. Lewis’s St. Anne’s—these homes, both ancient and modern, are anchors within stories of quests and danger and the old battle of light against the darkness. The keepers of these homes rarely leave them, rarely participate in the wars on which the whole story seems to depend. But though the homes themselves are not scenes of fighting, they are the places where those called to fight must come to receive the healing, wisdom, and weaponry without which they, and the battle itself, would be lost; and had those responsible for these homes either run to join the “real action,” or fastened their doors to keep it out, the stories would have come out far differently.

Hospitality sets the home apart from and against the most degenerative currents of our age. It affirms personhood in a world of collectivism, it graces our awkward modern lives with courteous forms, it insists on beauty over against our norms of efficiency and utility.

Indeed, the list of what hospitality does for a home could stretch long, but I will mention just one more of its most poignant effects.

Hospitality creates a culture in the home which those who dwell there may come to love and defend. One of the things I most admire about my mother, and grow to appreciate more the older I become, is her wisdom in always making our home the place my sisters and I most wanted to be; and this had much to do with her commitment to hospitality. When we were little things, playdates and homeschool groups were often hosted in our home. When we became teenagers, much drama and debate over curfew and restrictions were avoided because our home was the place our friends most wanted to be. My sisters and I pursued music teaching and tutoring for our high school jobs, and these too often happened in our home. Hymn sings, cook-outs, workdays—open doors were an integral part of the culture of our home, and I think this is part of why we all loved it so much, felt always the urge to honor and defend it. Our love for home settled our hearts in the way of life we were taught at home. And though it would be years before I read Hannah Coulter’s description of her Port William membership, when I did, the words fit what my sisters and I had always felt of our home: “Members of Port William aren’t trying to ‘get someplace.’ They think they are someplace.”

This, then, is the counterpoint to the making of a home: the opening of its doors.