A Host of Golden Daffodils 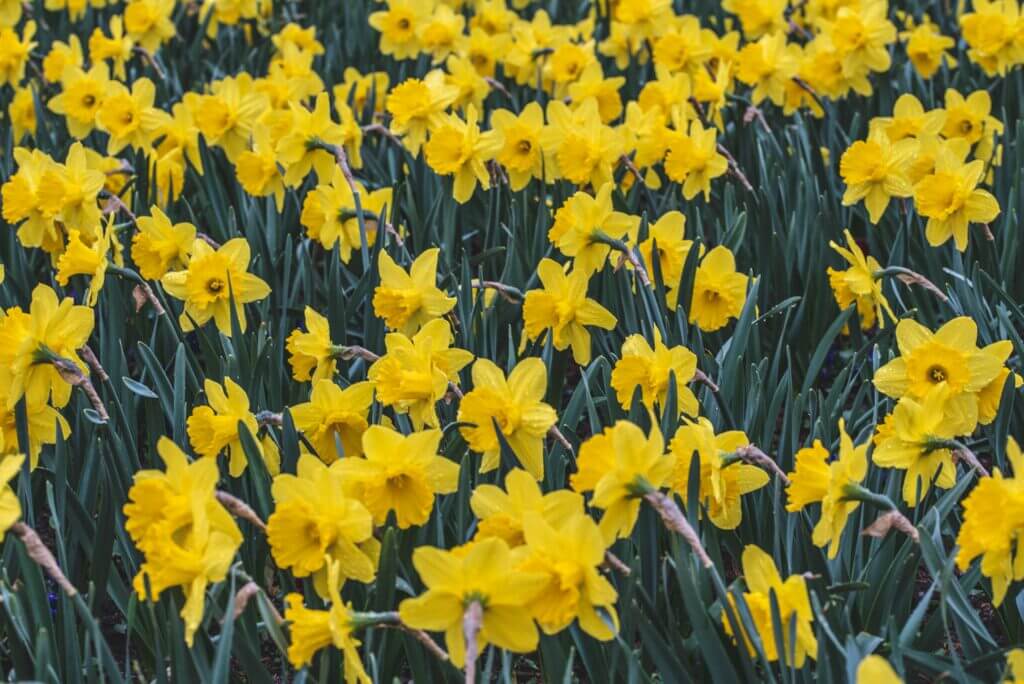 No one questions the whole idea of homeschooling more than a homeschool mom in February. February is a notoriously hard month for homeschool moms. It’s the month most of us want to throw in the towel, quit, hide under a pile of fun books, and send our children to boarding school. In Switzerland.

We are forced to face down all the rest of the curricula that we still need to finish, lamenting how much farther we have to go because we’re already so far behind. Then we beat ourselves up for forgetting that there’s no such thing as behind. If we don’t have anxiety for one thing, at least we’ve got it covered by the other.

A mom told me last weekend that she’s doing a bad job of being restful in her homeschool. I jokingly told her, “You should really work on that,” and she responded with, “I know!” before catching herself.

Half the kids are sick and sneezing into our faces, no one is washing their hands, and the weather is gross, so we can’t go outside. All our bright, shiny New Year’s resolutions lie in shambles.

The kids are mutinying, refusing to read or write or do their math problems. As a result, they are never going to grow up, move out of the house, get jobs, or be successful because we will have failed. We are always told, “I don’t know how you homeschool—I don’t have the patience for that!” Well, guess what, Karen? It’s February, and neither do we.

February is the month I actually toured private schools several years ago because I was Done homeschooling. Done with a capital D. I was lamenting to Andrew Kern—whom I had just met and, poor soul has since heard me lament more often than he probably cares to—that I was ready to quit, for real this time.

He told me not to. He told me to hang in there, that things would change just around the corner, and to stay the course. I couldn’t decide at that moment whether I liked this man or not. But I took his advice, and here we are, five years later, through blood, sweat, and tears, and we are hanging in there.

I don’t exactly have a strong reputation as a competent gardener. My capabilities could more likely be described as, “Oh, look, it’s still alive. Who knew?”

My wooded front yard consists of several trees, a couple of large, overgrown azaleas right in front of the house, lots of dead leaves, dirt naturally terraced by strong rainfalls, and some scattered moss. Suffice it to say, I am not going to win a “Yard of the Month” award any time soon. Or ever.

I tried to put some flowers in planters flanking the sidewalk right in front of the porch. Everything died, and then the squirrels got them. Now I have containers of really good dirt. If you see flowers in tubs flanking my porch steps, rest assured that they’re silk. At the time of this writing in late February, they’re still the fake Christmas poinsettias I bought three years ago. The fact that they’re faded beyond recognition is a dead giveaway.

We have lived in this house for five and a half years. We rented it for two years before buying it. Near the street along the driveway, there was a scraggly rose stem—“bush” is definitely not the correct word choice here. As renters, I left it alone, because it technically didn’t belong to me, but my first act as a homeowner was to yank that thing right out of the earth.

It grew back, so I yanked it out again. It grew back a second time, so I grabbed it as deep at the root as I could and yanked it out, ending its life as I had before. The third time it grew back, I took a good, hard look at it, decided I liked its tenacity and stubbornness and left it alone. It now taunts me from the top of the yard. It’s still as scraggly and janky a stem as ever.

Imagine my surprise our first spring in this house when daffodils bloomed in the front yard. Daffodils! I’ve never had daffodils! Other bulb plants also bloomed, but I couldn’t tell you what they are. Something, I think irises, gave it the good old college try, but nothing ever came up other than the leaves.

Our neighbor recommended relocating and splitting some of the bulbs, but all I ever end up doing is intending to move them, and then forgetting until it’s too late. “Next year,” I say. It’s always next year. Still, they faithfully come up every year, despite my neglect

Last year, for the first time, a bright red tulip appeared in the yard. Daffodils are one thing, but a tulip? That’s an upgrade. I was delighted. Out of nowhere, the crimson beauty just popped up one day, showing off. “If there’s one, surely there are others,” I thought, checking out my kitchen window every day. Nope. She was it. My son, whom I love, saw how much the tulip delighted me, so he cut it right below the flower, put it in a bud vase, and set it on my desk for me to enjoy. Bless his heart.

We’ve had a very mild winter this year, and all the trees and plants are confused, perhaps more so than the humans. Mid-January, I saw the tell-tale signs of the daffodils tentatively testing out the air. Normally, the bulbs come up sometime in April. This means that they are three months early.

Bright, green shoots started rising from the ground. I went outside and crouched down in my terraced dirt beside the plants and looked at them. I told them to wait. I’m not ready. Go back in the earth and try again around Easter. It’s not even Lent yet.

They stubbornly refused to listen, and instead, came up rather slowly. One day, the beginning of a bright, yellow face began to appear. It turned toward the kitchen window, away from the street, and every time I stand at the sink, there it is, smiling at me. Despite my best (or is it my worst?) efforts, this beauty exists, without me trying.

It has been joined by several friends, all their yellow faces turned toward the window, a reminder that I can hang in there, that there is hope around the corner, that I can stay the course, and that maybe, just maybe, February isn’t so bad after all.