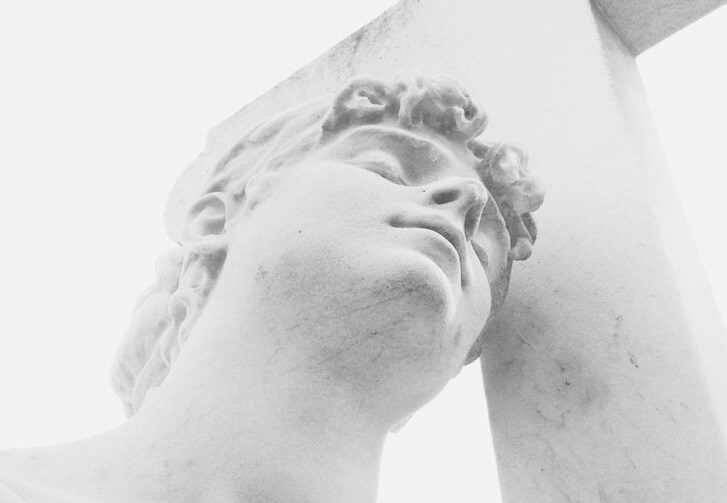 Earlier this year, I was in Manhattan and saw Reflecting Absence, the 9/11 memorial completed nearly five years ago at the site of the destroyed World Trade Center. The 9/11 attacks have an ongoing significance for me, as they inaugurated a slow change in my life which culminated in 2013 when I told friends and family I would no longer fly on airplanes. My fear of flying had gradually become so acute that sleeplessness set in the moment I purchased a plane ticket and continued for weeks after a flight. Reflecting Absence did little to assuage those fears.

All fear is a fear of death. Fear of flying is, then, a very obvious kind of fear. Fear of public speaking is far more obtuse, serpentine. Reflecting Absence is a massive inverted monolith and water falls endlessly down the mouth of a geometrical abyss. The motion of the water mimics the falling motion of the towers, and so the towers and the water (and the cosmos, ultimately) are devoured by the endless black mouth of time. Time is precise, four-cornered like the earth. It is not possible to stand near this architectural monstrosity without imagining yourself being swept down into the clean, mathematical nothingness. There is no consolation here, only horror.

Reflecting Absence is sublime, and there is always something human in the sublime. Nonetheless, I find it godless.

After two years in Richmond, I have finally seen Hollywood Cemetery. My wife had taken our children twice and explained the magnificence of the place, but I was not prepared for what I found.

Can the pyramid be appropriated to the Christian era? One can hope. Elsewhere, uncondemnable homages to what was noble about paganism struck to the heart.

On the perimeter of the cemetery, I found a tombstone which read DREAM GIRL. No dates were offered, though this to be expected. The woman’s romantic devotee is similarly ageless. The figure atop the shrine is reminiscent of something found in the Egyptian wing of the Metropolitan; her form suggests age, fecundity, dignity, but also unreadability, unreachability. Is there a human body buried beneath the shrine, or is this the work of a Pygmalion who lacked an Aphrodite to whom he might pray? At eighteen, I might have been apt to pray for a woman to marry at just such a location. The man wandering the cemetery is inclined to make a small offering of whatever he has in his pockets upon the shrine. On the day in question, pennies, a toy figurine, a few smooth stones, a cigarette lighter. Without invoking the cross directly, the shrine implores passers by to consider the cruciform shape of every failed romance.

If there is no woman buried beneath the DREAM GIRL, I could not claim surprise. Men die before women, and women bury men, and the cemetery takes on the shape of the woman’s grief far more than the man’s. The angels which attend the dead are overwhelmingly female. Wives establish their own icons to look over the bodies of their husbands.

As the one who gives birth, woman understands death with an intuition strange to men. Women represent themselves as the upright, understanding protectresses of their husbands, and the stone wives who oversee the beds of their deceased husbands do so with serenity. On the occasion a man buries his wife, however, the guardian of the grave is no guardian at all, but can do nothing except mourn.

Here, the mourner holds her head, closes her eyes, and gently shakes with grief. The inscription at the bottom of the tomb fondly recalls, SWEET HEARTS SINCE CHILDHOOD. The angel tries to remember some clue, tries to solve some conundrum created by the sentimental inscription beneath her. The emotional chaos with which death besets the living, however, sharply contrasts with the order of the cemetery. The longer I spent in the cemetery, the more it seemed like a city unto itself.

Many of the dead have houses, and some are neighbors. The houses of the dead are small, uncluttered, and often adorned with plants.

In the back of the mausoleum, an angel which will someday wake the dead looks back at the passer by who peers through the ironwork doors.

While human beings buried their dead before Christianity, the cemetery is no less distinctly Christian than the cathedral. While Jews buried their dead, they did not often visit them. Just as a Gothic cathedral is something far more particular than “a place of worship,” so a cemetery is something far more particular than “a place to bury the dead.” There are lessons about human frailty and longsuffering, lessons about hope and fear which cannot be learned anywhere but a cemetery. So far as etymology goes, there is little difference between “cemetery” and “dormitory,” and no one ever pushed the death-as-sleep metaphor as far as Jesus Christ. Christ pushed the metaphor until it broke.

The cathedral bells look down on the patiently elongating aisles of headstones. The cathedral reaches up, the cemetery reaches out. The infinite space which breaks open over the head of a man standing in a cathedral— this same space breaks open within the heart of a man standing in a cemetery. Both men understand, albeit in different ways, that will God dwells in unapproachable light, He is, in fact, also the very distance which separates us from Him.

In late Medieval France, a supplicant might be able to point to a stone, eye-level in a wall that seemed many miles high, and say to his son, “Your great, great grandfather placed that stone. He carried it fourteen miles during Great Lent. I never met him.” Cathedral stone or cemetery stone, which is the real headstone? And so the cathedral is a vertical cemetery, the cemetery a horizontal cathedral.

The men who broke ground on Chartres had no intention of seeing the work complete, but knew the space could be put to holy use many decades prior to the ribbon cutting. Chartres began without a budget. The money would trickle in, or flow in, and heaven would be built on earth one copper coin at a time. What’s more, neither the cathedral nor the cemetery has a single architect; the Medievals credited no man with auteur status the way modern men do a Frank Lloyd Wright or Ludwig Mies van der Rohe. However, if the cemetery and the cathedral are twins, the cemetery is certainly the more populist of the sisters. The cathedral is capable of eschewing sentimentality in a way the cemetery has never learned.

A child is born without greed, without malice. This child entered and departed the world in the same calendar year, but who can say how much time transpired between? A week? A day? This angel does not guard the body of her sleeping child, but sleeps, as well. The child who dies so young is not unlike an angel, a fact carved here into stone.

Immediately beside Douglas Pierce Rucker’s grave is the grave of his brother, Courtney, born in 1947. The brothers were born four years apart, though Courtney lived into the 1980s. A small child surrounded by animals sits atop Courtney’s tomb. Perhaps this child is the younger brother he never met, now visible in death.

The tombstone of a child who was born and died in June of 1888. A black spotted moss grows on the child’s stomach and thigh, and Chronos has severed the child’s stone left foot. There is something suggestive, even grotesque about the black growth which reminds a passer by of the sad ephemerality of life: not even a little stone child can live forever.

In protest of the stone child’s cancer, someone has left a white bear dressed in a satin at the foot of the tomb. According to Jonathan Swift, natural affection does not outlive a century, and we do not feel genuine pathos for purely speculative persons. Whoever placed this toy at the grave (barring the possibility of ghosts, let us say) would never have seen the child commemorated, and probably missed breathing the same air as this child by at least three generations. However, fictional persons refuse to stay fictional. I suspect the little stone child functions as a surrogate grave for the young mother of a stillborn child who sometimes passes by on the way to her father’s grave. Perhaps, in this way, there is a holy place where she can honor the one who could not leave a body behind for her to mourn.

If a man has not yet understood death as the great egalitarian judge, he would do well to see how the cemetery is capable of conferring nobility and courtliness upon even the sweetest of testimonies.

While one should not dismiss the financial limitations of the bereaved, it is fascinating to compare the eternal companions which the widow or widower chooses for their loved ones. Here, a hooded figure steps out of the pages of a book.

However, most choose only words. Elsewhere, a tombstone read MY HUSBAND, and featured a name and dates. While “my husband” is a smiling figure to be introduced at dinner parties, when etched in stone, “MY HUSBAND” becomes a profoundly dignified, sober sobriquet. The capital letters make the title all but regally official, yet the one who crowned him seems both desperate and confident, but also heartbreakingly proud to have known him. MY HUSBAND was only twenty-seven when he fell asleep.

The cemetery plot tells a story. Bessie Anderson died at the age of five and was buried beside her younger brother W. and her older brother Edgar. W. died at the age of 2, Edgar at the age of 10. Behind these three little graves, traces of a lifelong sadness linger on the tombstone of their father. He passed before his wife, and she inscribed on his tombstone, “GOD HAS NOT FORGOTTEN.” I can only imagine “OUR HEARTBREAK” completes the epitaph.

For three days, I went to the Hollywood Cemetery. Many Orthodox prayers and authors comment on the look of peace on the faces of the dead. I have not passed much time in cemeteries since I was in high school, though I was overwhelmed by the peacefulness of this place. It was serene in a way which transcends the museum, the garden. Many tens of thousands of dead are buried here. It gives hope to a man of many doubts and fears that a cemetery can be a peaceful place, for I am sure there are many villains buried there.

After many more hundreds of hours at the cemetery, perhaps I will fly again.