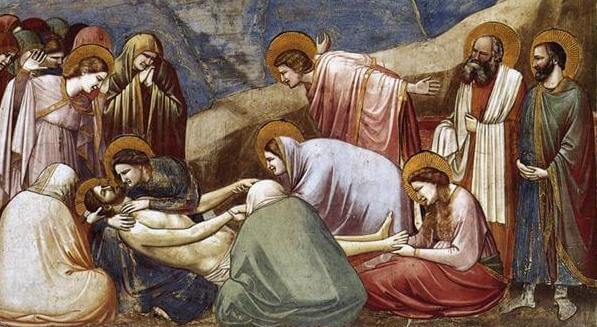 Amidst the whirling weeks of the year, Good Friday dawns and demands attention. Christ’s words—“do this in remembrance of Me”—ring still in our ears from their reading Maundy Thursday, and we feel the struggle of slowing to remember anything when days are packed so full and pass so swiftly; even the long discipline of Lent may not have fully quieted our hearts. We want to remember, we long to grieve so that we may rejoice come Sunday—but how?

This is one of the gifts of music, recognized by the psalmists, treasured by the Church, and offered even to us. The liturgical music of Holy Week invites hurried hearts to slow, remember, and rest in the gospel drama being recalled in these days, and perhaps no invitation is as compelling as that of J.S. Bach’s St. Matthew Passion. All other sounds and thoughts must be abandoned as its opening strains encircle—besiege—attention, for this chorus is a call to all-encompassing grief at the crucifixion of the all-Creator, a call sent forth in both large and small dimensions of sound, harmony, melody, rhythm, and form.

The St. Matthew Passion was written by J.S. Bach during his period as cantor in Leipzig, the position he held from 1723 until his death in 1750. This post required Bach to supervise the music of four churches, the Thomaskirche, Nicolaikirche, Matthaeikirche, and Petrikirche. As part of his duties, he organized their choirs and orchestras, trained their musicians, directed their performances, and wrote new music for their Sunday services and church holidays. Holy Week, during which the Passions would be performed, was the most celebrated holiday of the liturgical calendar. And so the St. Matthew Passion was written both as a part of Bach’s daily work and as a special event; like most of the greatest sacred works, it developed from the context of the composer’s quotidian life and responsibilities.

Of course, it also developed from a musical tradition. Like a symphony or a concerto, a Passion is a distinct musical art form, conceived as part of the church service and an ornament to the liturgy surrounding Easter. The first Passions were simple chants used to recite unadorned Scriptural narrative. Later, between the fifteenth and sixteenth centuries, polyphony, the use of multiple musical lines, entered the liturgy and influenced new Passion styles. One of these was the responsorial Passion (also called the choral or dramatic Passion), which involved alternation of parts between choir and soloists. From the sixteenth through seventeenth centuries, motet Passions were in vogue, and introduced a new interpretive element to the Passion tradition: rather than simply setting the Passion narrative of one gospel, motet Passions wove together excerpts from all four gospels. In the seventeenth century, this interpretive trend intensified in a new style of dramatic Passion, set in styles reminiscent of the recitatives and arias of opera and expanding the Passion from its former purely liturgical context.

Elements of all previous Passions were finally collected in the culminating genre of the Passion tradition, the oratorio Passion, which features alternation of solo parts and a chorus like a responsorial passion; draws texts from multiple sources, including extra-Biblical devotional texts and chorales, like a motet passion; and borrows operatic styles, like a dramatic passion. This form prevailed in the eighteenth century when Bach was composing, and his St. Matthew Passion is clearly an oratorio Passion—or, as many composers would say, the culmination of the oratorio Passion tradition.

Thus the Passion genre, from its earliest inception, suggests a desire to appropriate, dramatize, meditate upon, and enter into a central event of the Christian faith. It is a movement both of expansion in elaborating the story, and of contraction in personalizing the story. It enlivens the Passion as a historical occurrence outside the worshipper and as a spiritual occurrence within him, encompassing movements in opposite directions and events in separate spheres.

Of course, it takes the whole of the St. Matthew Passion to see all these themes developed. Yet many of them may be glimpsed in the unsurpassed opening chorus, “Kommt, Ihr Tӧchter,” where these expansive and contractive movements are set in the context of a call to all-encompassing grief. Richly interwoven textures of sound, the circling of melodies and text, and the expansive scope of the chorus’s form suggest the all-encompassing; grief is musically depicted through harmonies, rhythms, and melodic contours.

The chorus weaves together many colors and textures of sound. Its instrumentation includes a double orchestra of flute, oboe, violin, viola, and continuo (an improvised bass line in Baroque music, often played by a harpsichord or organ), with the absence of brass reinforcing the mourning mood of Good Friday. It also includes two full SATB choirs (choir including soprano, alto, tenor, and bass voices) and an additional soprano choir, representing the voices of the Faithful and the Daughters of Zion. Each of these three choirs sings a separate text. The double SATB choir divides the parts of the devotional poem “Kommt, Ihr Tӧchter,” written by Bach’s librettist Christian Friedrich Heinrici (known as Picander), in antiphonal call-and-response; meanwhile, the soprano choir sings the Lutheran chorale “O Lamm Gottes, Unschuldig.” The full texts read as follows—the first choir sings the plain text, the second choir the italics, and both choirs the bold text:

O guiltless Lamb of God,
Slaughtered on the stem of the cross,
Always found patient,
Although thou wast despised.
All sin hast thou borne,
Else we must have despaired.
Have mercy upon us, O Jesus!

The syllables and sounds of each text are carefully fitted to their musical setting, so that, when the syllables or sentence syntax of the text changes, so does the music. Even on a first listening, then, the chorus sounds like a conversation amongst many voices—the voices of those joining the call to lament.

Lament is also uniquely characterized through the harmonic structure of the chorus. The chorus’s center of gravity is the key of E minor; significantly, however, the soprano choir’s chorale of redemption is in the relative major key G major. Within these tonalities, Bach interweaves nearly every possible chromaticism and chordal variation—perhaps a picture of the nature of grief. Though simple in that it is experienced by everyone who has breathed this earth’s air, yet grief’s simplicity is belied by the myriad overtones of situation, person, psyche, and all else which accompanies it, like the overtones of chromaticisms and chords Bach weaves into his simple keys. Most especially, as we grieve the murder of God—the murder perpetrated by our guilt, as the choirs state—most especially then these minute inflections of our grief, here expressed in chromatics and dissonances, must be infinite.

The passion genre enlivens Christ’s Passion as a historical occurrence outside the worshipper and as a spiritual occurrence within him, encompassing movements in opposite directions and events in separate spheres

We face a similar paradox between the simple and profound in analyzing the chorus’s melody. On first hearing, the chorus seems to have a “singable” melody. But it is not so simple, for the melody that soars over a sea of sound in fact emerges from the interweaving of multiple lines and voices, so that the notes one might hum are plucked at the caprice of hearing from the eight lines of the double choir plus the soprano choir. The one melody is actually many melodies, and must be traced through the interlocking lines of the counterpoint sections and the contours formed by the call-and-response of the antiphonal sections. These individual lines repeatedly feature a sinuous melodic contour, in which tightly stepwise motion proceeds so that every few steps in one direction are countered by steps in another. This spiraling contour may reflect the surging of the crowd, the heart’s anguished writhing, the circular all-encompassing motif, or the wailing which the chorus calls us to join.

These emotions are also expressed through the chorus’s rhythm. Once the chorus commences, there is no silence; sound continues unabated, as does grief. Relentlessly we are driven forward by the meter, featuring a rhythmic pattern which echoes on every level and in every voice–a dotted quarter tied to the first of three eighths which follow it. This pattern seems, quite literally, to depict quintessential unfulfilled longing—the feeling of taking one step forward, followed by two steps back.

All of these details are gathered up to characterize the chorus’s form. It is difficult to perceive the form while listening to it, as the music catches and carries us in a wave which seems continuous, unbroken, and indivisible. Perhaps the simplest and most useful way to hear the form of the chorus is by the alternation of its textures. The alternation of choral outpourings and instrumental interludes is laid over the alternation of the musical textures reflecting the text, and over these is laid the ringing soprano chorale. Seeing the form this way illumines the meaning of the work. The many-voiced, melodic “Kommt” sections call us to join our voices to the wails of those who watch Christ’s suffering. The antiphonal, staccato “Seht?” sections force us to ask and answer questions of Christ’s identity and our own: He is the spotless lamb of God, we are the ones where guilt resides. Over all this tumult, we hear the chorale, declaring the meaning of it all in the announcement of salvation: the Lamb has borne our sin, and though we now grieve, we must otherwise have despaired.

Although this alternating textural structure repeats its pattern, the chorus also moves strongly forward towards culmination. The questions breaking through the “Kommt” sections increase in urgency as the inquiring crowd turns from asking the identity of the Bridegroom-Lamb to searching where to lay the guilt that condemns him, and finding it upon themselves. These “Wohin” sections differ both from the “Kommt” sections and from the other questioning sections; their instrumental accompaniment actively jumps about to a constant eighth-note rhythm, conveying anxiety. Following this, both choirs join for the first time to sing the “Kommt” section together, as if they all cease questioning, acknowledge their guilt, and turn to focus solely on the Lamb. These moments culminate as all voices share the same syllable while emphasizing a single melodic line for the first time. This syllable (the “ah” of “tragen,” or “carry”) sounds forth the lament, the wail, which the whole chorus has been calling us to join. Shortly after it, the two choirs break into call-and-response once again, naming for one last time the Bridegroom, the Lamb.

Listen to it here—the opening chorus continues to 7:55, after which you may hear the whole Passion.

The chorus which is thus ended has only begun the whole retelling of the story of Christ’s Passion. Yet, in a sense, it has told the entirety of the story. We have already heard the announcement of the One Who came as our love and our sacrifice; we have heard that He was slain to atone for our guilt; and we have heard the call—have joined the call—to enter into His story. The opening chorus encompasses the message of the entire Passion; indeed, it encompasses the whole declaration of the Gospel, and invites us into the drama that remembers it this Holy Week.