Have Most Christmas Traditions Become Meaningless? 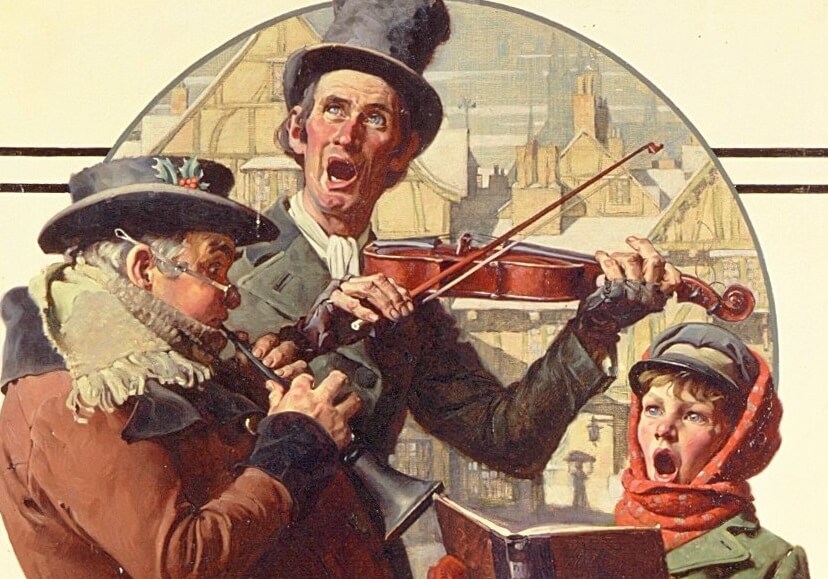 Between Thanksgiving and Christmas, Americans speak more about tradition than they do at any other time of the year. A great volume of traditions are fixed to December 25th than any other day in the calendar, and these traditions range from highly personal to ecclesiastical. Traditional foods should be prepared, traditional colors worn, traditional hymns sung, traditional stories read. Churches that use a breviary on no other day of the year (and light candles on no other day of the year) are yet given to reading, by the soft glow of bee’s wax, the well-known account of Christ’s birth from St. Matthew’s Gospel on the evening of December 24th. Why are candles used on this day and not others? It is simply a tradition. And why a creche for December but not a Crucifix come April? This, too, is justified on the grounds of tradition.

So much talk of tradition is bound to arouse the materialists, the secularists, and the rationalists from their slumber that they may once again trot out their tired, though sadly effective objection to old things, namely, that no one knows the origins of these traditions anymore, and so they are meaningless. The relationship of “the holly and ivy” to the birth of Christ is unknown, as is the origin of the Christmas tree, the colored bulbs on the tree, mistletoe, candy canes, Santa Claus, not to mention all the spices (cinnamon, nutmeg, clove) which attend Christmas fare. Most people perpetuate these traditions mindlessly, which is to say selfishly, for what we really like is the taste of mulled wine and the dulcet sounds of the King’s College Cambridge choir singing, “I Saw Three Ships,” and we simply could not care less about the (allegedly) pious origins of either.

The rationalist objection to most traditions, not just Christmas traditions, is that when the origin of the tradition is forgotten, the material aspects of the tradition are useless. For the rationalist, a tradition is nothing other than mnemonic device used for remembering the past. What matters most is the mind, the intellect, and the only way to remember anything is to consciously recall it and to have a nice discussion about it. Rationalists tend to have a great confidence in people sitting down to talk. In fact, all the problems of the world could be solved quite quickly, quite tidily, if everyone would just fold their hands and dialog with one another. The problem with liturgy, piety, and tradition is that they distract us from the real solution to the world’s problems: polite, reasonable conversation. When traditions lose their reference point, then, there is nothing to talk about, nothing to preach about, and society descends into anarchy. This is certainly an odd claim, though, given that whatever constitutes a church’s most traditional service of the year is also typically its most serene service. I will wager green money that any church’s Christmas Eve service is more peaceful than its annual budget meeting, despite the fact the latter purports to be nothing more than a reasonable conversation, while the former is an ancient collection of irrational, obscure customs.

The rationalist does not believe that anything is inherently meaningful, but that meaning is given or assigned. All symbols are ultimately arbitrary. If the symbol is merely a set of instructions on how to get to the symbolized thing, then an ignorance of the language in which the instructions are written means the symbol and the symbolized are radically separated. We are accordingly free to redirect any object to any meaning we like. We may say, “The park is like Church to me, so I go to the park on Sunday morning,” or a man might say, “Men have the same sexual value for me which women have for most other men.” The Church nave, the male body, the female body, candles, hymns, architecture, and flowers are all meaningless until we give them meaning, and we are free to change the meaning whenever we like. In this way, there is really no such thing as a male or female body, and neither is there such a thing as a candle or a hymn or a rose. The meaning of a candle is subjective. For this cause, it has become de rigueur for avant-garde art to consist of one standard kind of object, like a glass of water, and for the to be given a title like An Oak Tree. It is little surprising that the popularity of nihilistic philosophy followed so closely on the heals of rationalism.

Of course, we should not let the rationalists swindle us with their gruesome, philistine philosophies. In the ages prior to rationalism and secularism, Christians embraced a radically different, sacramental theology of meaning and symbol. Meaning was neither assigned nor artificial. Rather, meaning occurred naturally. Medieval Christians believed that meaning was inherent to a thing, not added later, and that it was the work of man to discern the meaning in things. Of course, modern science rejected the belief that things inherently had meaning; moderns sought, instead, to ascertain how things worked.

For medieval Christians, the meaning of a thing was that which called the thing into reality, and thus symbol and symbolized could not be separated. In this, meaning was entirely objective. When a man ate a food, he ingested the meaning of that food in the same way he ingested the nutrients of the food. Eating an entire birthday cake will make a man fat whether or not he knows how many calories are in, and Christians have long held that meaning was no less objective a fact as caloric content. They held not only to an ex opere operato view of the Eucharist, but to an ex opere operato view of the entire cosmos. Every conceivable object was the sacrament of itself.

In The Meaning of Conservatism, Roger Scruton argues that traditions are “a form of social knowledge,” not mnemonic devices which can be disconnected from knowledge. This simply means that setting up a Christmas tree is in itself a way of knowing. Eating a candy cane is in itself a way of making it Christmas, whether we know the origin of the candy cane myth or not. Scruton writes:

Modern liberals tend to scoff at the idea of tradition. All traditions, they tell us, are ‘invented,’ implying that they can therefor be undone…

However, Scruton argues, “A real tradition is not an invention; it is an unintended by-product of invention,” which is to say that men cannot call traditions into existence. We merely recognize that traditions have come into existence while we were busy doing other things. A tradition is an event we recall from the past and, upon reflection, believe to be a touchstone with the transcendent. Accordingly, we want to do that past thing again and again in order to once again put ourselves in contact with that transcendent thing. We cannot force or conjure such contact with the transcendent. Only the passage of time can reveal that which transcends time.

Meaning cannot be assigned to images, objects, or words any more than nutritional value can be assigned to food. Nutrition can be discerned and argued, but not given. In this sense, we may go beyond saying, “Meaning is objective.” A sacramental view of the cosmos requires us to say, “Meaning is an object.” These are lofty, esoteric claims, so I should like to bring them down to earth. For the Christian, nothing can ever lose its meaning. Because meaning is not given, it cannot be lost. Meaning depends neither upon the consent, design or memory of man. Meaning depends upon the omnipresence of God and the Incarnation of the Logos, truths which are independent of human desiring.

Thus, it does not matter if a man knows where the tradition of the Christmas tree comes from; it is enough that he installs one in his home come December and decorates it. The installation of the tree and the enjoyment of the tree’s meaning are synonymous. It does not matter if an infant knows the meaning of food; it is enough the child eats and does not starve. It does not matter if a man knows why lilies are symbols of purity; it is enough he bring them to his wife after she gives birth. The man who eats candy canes, decorates a tree, wears red and green, and sings “I Saw Three Ships” has entered into Christmas itself. Intellection is not required. The candy cane is no arbitrary symbol of Christmas. The candy cane— like all symbols— is inseparable from its history, usage, creation, telos. The man who eats the candy cane, even if he eats it in ignorance, eats the telos of the candy cane. He gnaws on the meaning. He consumes history.