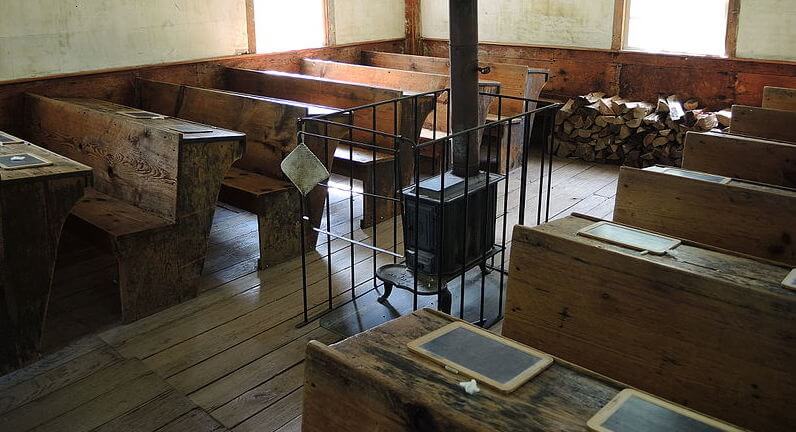 I’ve just finished re-reading Wendell Berry’s Hannah Coulter. In it, twice-widowed Hannah retells Port William’s story from the view of her places in and around it—the rundown farm of her childhood in Shagbark, the boarding-house room in Hargrave, the generous Port William farmstead of the Feltners, and finally “the old Cuthbert place” that she and Nathan loved back into being. It is a story already partly told, from different vantage points, by Jayber Crow, Andy Catlett, Nathan Coulter, and the other Port William characters who narrate Berry’s novels. Set within the subtly lovely theme-and-variation of Berry’s corpus, Hannah Coulter is both a lament for a way of life lost and a song of thanks that it ever was given.

It is also, largely, a critique of education. The accusation: Education rips apart what should be woven together—children from parents, people from places, husbands from wives, work from vocation, ideas from consequences.

But, having shared in the life of membership through their childhood, Hannah’s daughter and two sons go to college, and from there leave to seek lives as public school teachers, university professors, and technology-company CEOs. They commute long distances from home to office, travel often in airplanes, choose jobs that will advance them over work they can love, experience divorce, mourn their children’s rebellion, nearly miss their father’s funeral. “The old ties, to be plain about it, are mostly broken,” Hannah observes; “We live in different places, lead lives that are different, have different hopes and thoughts, know different things. . . . The way of education leads away from home. That is what we learned from our children’s education.”

In contrast to her own children, Hannah watches Danny and Lyda Branch’s children. “Danny and Lyda’s attitude toward education was different from Nathan’s and mine,” she acknowledges; “Every one of [the children] seemed to have a perfect faith in the education they got outside of school, which they didn’t even call ‘education.’ Out of school, they learned what they evidently thought they needed most to know . . . To learn things they didn’t know, they asked somebody or they read books.” The Branches and their children stay in the membership, and it is they, in the end, who Hannah says “made [her] glad [she] stayed alive.”

The story’s trajectory, and statements like these, would seem to imply that education’s inevitable end is to rip apart the life of membership, and that therefore education is an evil. But, as always, Berry is more honest and thus more complicated than that.

First of all, in the story he tells through Hannah, the life of membership that Hannah celebrates was received partly through her own education. Hannah’s Grandmam, who raised her, “had not had much schooling—only eight grades—and so school was a big thing to her. ‘You have got to learn your books,’ she said. ‘You have got to keep at your studies.’” And, later, “‘You have graduated from school. You’re a valedictorian. You’re smart, and you can do things. This is not the right place for you. You need to go.’” Through Grandmam’s diligence, Hannah graduates as valedictorian; through Grandmam’s determination, Hannah moves away from Shagbark to find a job in Hargrave; through her move to Hargrave, Hannah meets Virgil, who makes her “one of the Feltners,” bringing her to “what would be [her] life’s place.” Hannah cannot say that education brings only evil when it brought her her greatest good.

Second, sprinkled throughout the passages quoted above, Hannah’s musings raise the question of whether her children’s choices were not caused by their education alone, but also by the attitude surrounding it—the reasons they were encouraged in it, the goals that were set for it. Essentially, this attitude is oriented towards self-improvement; as Hannah says, “The big idea of education, from first to last, is the idea of a better place. Not a better place where you are, because you want it to be better and have been to school and learned to make it better, but a better place somewhere else. In order to move up, you have got to move on.” Hannah witnesses this attitude through three generations: “Grandmam, who never went to high school, was desperate for me to go to high school. And I, who never went to college, was desperate for my children to go to college. . . . [Nathan and I] felt we owed it to them,” she says. She describes how her son Caleb’s professors made this clear to him as well, saying, “Caleb, you’re too bright to be a farmer.” “Caleb, there’s no future for you in farming.” “Caleb, why should you be a farmer yourself when you can do so much for farmers?”

This attitude was not only explicit in schooling, but—even more significantly—implicit in story-telling:

It was lovely, the telling and the listening, usually the last thing before bedtime. But did we tell the stories in such a way as to suggest that we had needed a better chance or a better life or a better place than we had? I don’t know, but I have had to ask. Suppose your stories, instead of mourning and rejoicing over the past, say that everything should have been different. Suppose you encourage or even just allow your children to believe that their parents ought to have been different people,with a better chance, born in a better place . . . Doesn’t that finally unmake everything that has been made? Isn’t that the loose thread that unravels the whole garment?

Hannah’s questions suggest that perhaps it was not the schooling alone that unravelled the membership, but the contradictory values and desires from members themselves that attached themselves to education.

So does education inherently rip apart—or does it have the dangerous potential to do so? Berry, through Hannah, complicates his argument with such musings, and leaves the reader with difficult questions worth pondering.

What is really essential? What do we “owe” our students, our children?

Do we learn, and teach our students to learn, in order to “move up”? What is the telos of such a goal? Is it worthy?

To what extent does our system of schooling—be it progressive, classical, un-schooling, what have you—substitute counterfeit ideals for true ones? “A better life” or individual fulfillment or success or learnedness or happiness in place of membership, community, fruitfulness, faithfulness?

In addition to leaving one’s physical home, how might “moving up by moving on” become a pattern in one’s spiritual, ideological, moral, aesthetic home? Will our teaching cause our students to feel that, to move up, they must move on from Christian faith?

How do we safeguard our schooling and storytelling from our own ingratitude, discontent, misplaced desire?

What do we really love?