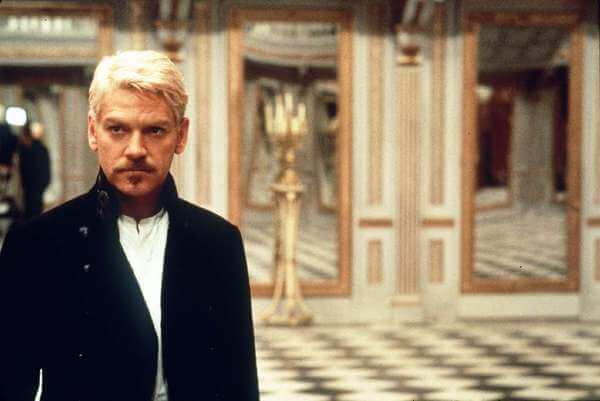 As modern men, we take the arbitrary nature of the world for granted. Every man is obviously allowed to determine the rules for himself. I pray you have not seen many vampire movies, or many zombie pictures or werewolf films, but if you have, you know that within the first act, the director must establish the particular vampire or zombie rules which will govern this film. Will the vampires in this film be averse to garlic or not? How about holy water? Sunlight? Crosses? Silver bullets? Stakes through the heart? No contemporary director is willing to make his vampires averse to all of the traditional vampire allergens, and no modern writer wants to buy vampire tradition wholesale, but must make little adjustments and refinements to the great body of vampire lore which populates the modern imagination. Lest the audience feel cheated late in the story by the sudden intrusion of fresh laws, the sagacious director is best served by opening the film with a reading of the rules of the game, and so the hero meets with a mentor around the conclusion of the first act, and the mentor unfolds the law for all.

However, this all strikes me as a perilously pluralistic approach to telling stories. We moderns are torn between hating rules and loving games, but games must necessarily have rules. This means that our vampire stories— if they are to be actual vampire stories— must have a few traditional rules, and yet, to prove the pedigree of our power, we must jettison a few of the traditional rules just so the audience knows who is boss. Of course, vampire stories are not the only stories which begin as such. Most yarns about angels and demons, heaven and hell, fairies and trolls and so forth begin with a stating of an arbitrarily cobbled together myth.

While modern men are willing to have the rules constantly redrawn, we ought to be slow in assuming audiences have always been so pliable. At the end of the first act of Hamlet, the young prince of Denmark speaks with a ghost who claims to be the recently slaughtered king. The ghost claims he is “thy father’s spirit, Doom’d for a certain term to walk the night, And for the day confined to fast in fires, Till the foul crimes done in my days of nature Are burnt and purged away.” The ghost alleges this time in purgatory is the direct result of dying suddenly, with much unconfessed sin on his conscience. After unfolding the story of his own murder at the hands of his brother, Claudius, the ghost commands Hamlet to avenge his death by killing Claudius. The remainder of the play, as we all know, finds the young Hamlet variously wavering in his resolution to do what the ghost has asked. The modern man reading the play comes to the ghost’s description of his condition ready to believe all it says, for we think laws which govern the spiritual realm to be perfectly arbitrary. Nonetheless, this is an entirely anachronistic way of reading the play which skews our ability to understand Shakespeare’s subtlety.

Simply put, there is not a Christian tradition or denomination the world over which would consent to the viability of the ghost’s story. The ghost claims he burns in purgatorial fires during the day, but walks the earth at night, seeking accomplices in a revenge plot against his murderer. While a Catholic would allow Hamlet’s father purgatory, the idea that those who are having their sins purged away during the day sometimes moonlight as rogues and coup d’état conspirators is risible. No Catholic would consent to such a possibility, and neither would an Anglican, a Puritan, or a Calvinist. Shakespeare knew the ghost’s story unorthodox, but the fact that Hamlet does not is darkly comic.

Twice in the second act, Hamlet does something which no other character has yet been able to accomplish: he smells a rat. Nearly every character is part of a con or spy game. Claudius and Gertrude use Rosencranz and Guildenstern as spies. Polonius uses Reynaldo to spy on Laertes. Polonius and Claudius use Ophelia to spy on Hamlet, then they use Gertrude to spy on Hamlet. Hamlet enlists Horatio and Marcellus in his mad act, then Hamlet uses the acting troupe to spy on Claudius’s conscience. Fortinbras tries to make war on Denmark one week, then makes nice and asks to troop through the Danes’ backyard the following week, but neither Claudius nor his chief advisor think this suspicious. Only Hamlet has the self-awareness to question whether someone might be trying to game him. After Rosencranz and Guildenstern blithely show up at Elsinore, Hamlet demands they yield the real reason for their visit and they confess Claudius and Gertrude hired them to search out Hamlet’s heart. Just a little while later, Hamlet chides himself for stalling on his promise to the ghost, then thinks better of it, saying

The spirit that I have seen

May be the devil: and the devil hath power

To assume a pleasing shape; yea, and perhaps

Out of my weakness and my melancholy,

As he is very potent with such spirits,

Abuses me to damn me.

While the ghost’s account of purgatory is not consistent with any denomination’s orthodoxies, the idea that the ghost is a disguised demon is suited to any Christian tradition you care to name. The Golden Legend is rife with such stories, as are most late antique hagiographies— neither are these merely Catholic traditions, for the most iconic Protestant hymn ever written refers to “this world with devils filled” which “threatens to undo us.” I suppose a few American Christians today are skittish about spirits, though they always prove embarrassed on “missionary Sunday” when gallant evangelists preaching in far-off lands return to report all the angels and demons they have encountered since their last furlough. We city-dwellers who fix our faces on screens eight hours a day have a far better grip on reality than all those primitive would-be martyrs, of course.

Sadly, the demon’s trick is deeper than Hamlet imagines. In the second scene of act three, Hamlet tells Horatio, “If [Claudius’s] occulted guilt Do not itself unkennel in one speech, It is a damned ghost that we have seen…” In other words, if the additional texts which Hamlet has written for The Murder of Gonzago do not elicit guilty looks from Claudius, then King Hamlet was not murdered and the ghost is nothing but a demon. Hamlet assumes that Claudius’s guilt is necessarily related to the identity of the ghost; if Claudius is innocent, the ghost is a demon, but if Claudius is guilty, the ghost is a ghost. However, this assumption is groundless, for Hamlet never considers the rather obvious possibility that a demon knows his father was murdered and is using that bit of knowledge to inspire bitter hatred in others. A demon might know of King Hamlet’s murder through any number of means, and perhaps the demon tempting the young Hamlet to murder Claudius is the same demon who tempted Claudius to murder the elder Hamlet.

While Horatio and Marcellus are initially anxious for the young Hamlet to speak with the ghost, they quickly change their minds once Hamlet excitedly stands before the ghost and indicates he is willing to follow it alone into the woods. Horatio worries the ghost will bring Hamlet “to the dreadful summit of the cliff” and tempt him to throw himself off, or that the ghost will “draw [Hamlet] into madness.” Perhaps, having seen the ghost beckon Hamlet into seclusion, Horatio also has misgivings about the identity of the ghost. After all, Horatio correctly assumes the ghost will tempt Hamlet to evil, and that it might deprive him of his reason. We may doubt Horatio would suggest this if he were convinced the ghost were actually the spirit of Hamlet’s father.

In the end, there is simply precious little in the play which commends us believe the ghost’s assumed identity is authentic. A post-Freudian society is apt to make the spirit a grief-induced delusion of Hamlet, a vision, a projection of guilt, and yet Hamlet is the fourth character to see the thing. Hamlet must hear of the ghost from a veritable squad of first responders. Granted, not every interpretation must make sense of all the facts (and some very good interpretations of great literature nonetheless contradict a few facts), but if we are merely trying to determine authorial intent, Hamlet as johnny-come-lately to his own vision does not satisfy.

And yet, all of this opens the question of why? Why dither around with the identity of ghosts and demons?

The fact that Hamlet is a student in Wittenberg simply cannot be overlooked. By the time Shakespeare wrote Hamlet, the name of Wittenberg could not fail to call to mind Martin Luther, that university’s most famous professor. Hamlet has returned from college without a tradition to call his own. He is neither so Protestant that he rejects the doctrine of purgatory and confession to priests, but neither is he so Catholic as to have traditional understandings of purgatory and confession. In his introduction to Shakespeare’s works, Harold Bloom suggests that no character in Western literature has a more expansive inner cosmos than Hamlet, and I see little reason to dispute this claim. However, Hamlet’s immeasurable interiority comes at the expense of his frenzied, unmanageable approach to dogma; Hamlet’s soul is vast in the same way Harrods of London is vast. If his soul includes many fine things, it is simply because it contains many things, and yet the many things which stock Hamlet’s soul are arbitrarily and untenably bound together.

He has too many ideas. He is at war with himself.