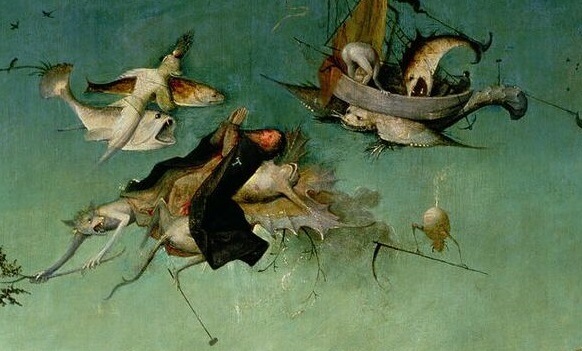 Markus performed a forty day fast and then castrated himself, despite discouraging words from his teachers. This was to be the crowning laurel of his Stoic education, and yet only a week later, before he was physically recovered, word came his parents were dead—a sudden fever— and all his learning was as for nothing. Like a crown of hair grown out for a lifetime— as long as the body itself (licking the floor)— suddenly lopped off with a pair of shears. Like it was never there. Like it never happened.

He forsook sleep and looked on the moon, instead. By the time word came to the city of Alexandria, his parents had been dead two months dead, their corpses burned and mourned by a few great aunts and his sister only. Little remained at home to which he might return.

He drank a little for the first time in his life. His sister passed through the city looking for him, but when she could not find him, she left his inheritance with his teachers. No small sum, but no large sum for a man sloughing off his Stoic prejudices. Markus collected the money with shaking hands one morning, already desperate for drink. Weeks later, he confessed to the surly drunkards with whom he passed a bottle that a paralyzing fear of death had taken hold of him, and that liquor was no longer sufficient. He asked them where he might find drugs which could lead him to forget death.

They laughed and said opium would do him little good on such small funds. He lacked the money for an honest opium habit, and what little balm he might accustom himself to with his remaining cash would only aggravate him in six or seven months time when he went broke and had to steal or prostitute himself.

“How much do you have?” they asked, and when he showed them, the drunkards regarded one another sadly and said, “You need a demon, instead.” Markus was baffled, but they told him only demons could make a man forget death. “Go to Rome and buy yourself a demon. For six gold Aureus coins, you can buy a demon who will make you forget death.” Markus pressed for an explanation, and they told him, “The effects of drugs fade, and you must find more. If you are thrown in jail, there are no drugs to be had. If you take a demon into yourself, however, the effect will not fade, and even though you are thrown into jail, yet the demon will always be with you. We would purchase demons, but we have not money for it.”

Markus asked what kind of demons he might buy. One demon, he was told, made a man’s own body look like a woman’s body whenever the man looked in a mirror. A different woman for every different mirror. Another demon would sing a song to lull a man to sleep whenever he wanted, and the sleep would be long and deep and the man would wake with the strength of two men.

“But the demon you want— his name is Azazius. When you take on this demon, he will live inside your thigh and sleep there. When you want to wake Azazius, you must bite your thigh very hard. Azazius will wake suddenly and shoot through your blood. He is the forgetting demon. He will make you forget anything you want to forget.”

Markus asked how long a man might forget what he wanted to forget after arousing Azazius and the drunkards said, “Until Azazius goes to sleep again.”

Markus asked, “And how long before he wants to go to sleep again?” and the drunkards told Markus “days and days.”

Markus asked, “Can he make me forget about death?” and the drunkards said, “To forget one’s death— this is the only thing people want to forget. The man who can forget his death sees the world as a god sees the world, for only the gods do not think of their own deaths.”

The drunks told him he must go to Rome to buy Azazius. He was an expensive, top-shelf deity, not to be found anywhere less than the capital of the Empire.

At dusk, Markus boarded a ship bound for Italy and he lay all night beneath Poseidon’s figurehead on the prow, thinking of his dead father and hating his own life. He wanted to be dead, but he wanted to never die, as well. His desires could not be simplified beyond this— to be dead, to never be dead.

When the ship made port in the morning, he paid his fare, disembarked, and wandered aimlessly through a bazaar, then a funeral, reading every face he passed for the creases which bespoke a connection to demons— heavy eyes, black forehead. He meandered through a bad neighborhood. A pack of women nude but for quivers of arrows strapped to their backs ran through the streets, screaming. A woman with no eyes seized his arm and asked him if he would like to purchase the skull of a newborn child.

In the afternoon, Markus came into a tavern and said to all, “I want someone who can get me Azazius.” A few drunkards looked over their shoulders at him then back to their drinks. A moment later, one said, “No market for Azazius anymore. Nobody’s wanted him for several years.” Markus became angry and said, “Why not? We need Azazius! Don’t we all need him sometimes?” The tavern-keeper said, “Azazius was very popular among those who could afford him. A hundred years, perhaps, he was popular. But then he was leased out for cheaper prices, then cheaper and cheaper, and even though anyone could afford him, no one wanted him.” And Markus said, “Why not?”

After an hour, the drunks of Rome led Markus to the heart of the city, to the coliseum, and they showed him why no one would pay for Azazius. A naked man was hung six feet off the ground by his arms and a pack of leopards leapt at his feet, scratched them, biting and ripping, until the man’s legs trailed off in frayed wires of nerves and veins. The man was silent through all this, and when they lowered him two feet closer to the ground (to the delight of the leopards and the crowd), the man began to sing a hymn. The crowd was suddenly stunned into silence. The cats hissed and tore at his thighs, but he sang a little song and ten thousand souls were beholden to him. The drunkards said to Markus, “Everyone wants that man’s demon instead. Azazius can’t do that. Imagine it. A demon which makes a man impervious to pain.” Markus asked, “Who is the demon?” but the drunkards did not answer. After the tortured man breathed his last, Markus asked, “What did he do to deserve such a death?” and the drunkards said, “The demon that allowed the man to sing while he was eaten— it is an illegal demon.” Markus said, “Why?” and they answered, “Isn’t it obvious?”