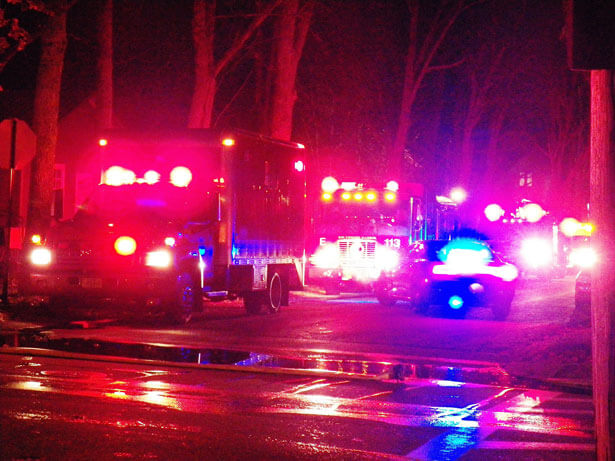 Rain poured from the densely clouded sky for what seemed like the fortieth straight day. It had already been the rainiest season in recorded history and there appeared to be little break in sight. The clouds darkened everything, making it feel much earlier than it was.

I rose, mumbling my complaints at the weather, and dressed to exercise in hopes it would make me feel a bit better. The kids were just stirring, following my bad example of griping at rain, while my wife tried her best to motivate them to complete chores.

Having finished my workout, I walked into the kitchen while the sound of our morning routine bounced off the walls – a mixture of music, dishes being put away, homeschool memory chants, feet padding down the hallway, and children being told to stay on task. Another sound began. A loud, unpleasant, piercing sound. Tones, followed by a series of rapid beeps.

Every call is assigned a response level, from routine to “get there yesterday”: Alpha, Bravo, Charlie, Delta, and Echo.

I ran to our bedroom closet, threw on the pants, boots, and hat I keep ready for such situations, put my bright coat over my sweaty t-shirt, and sprinted out the door. My wife, having heard the call when it came over my radio, had already started my truck, giving me time to punch in the address. I flipped on the dashboard emergency lights and headed directly to the scene. Though I would normally report to our fire station and ride on the squad truck (a fire department’s vehicle for medical calls), the call’s severity made me think it best to simply go.

“Units responding…patient is a 36-year-old female. Not conscious. Not breathing. Found by her mother. Currently on the bedroom floor.”

The rain pounded the windshield, slowing my progress and making it difficult to see. Cars ahead, seeing the emergency lights, did their best to move to the side, but pulling off the road was a treacherous proposition. Navigating through traffic, trying to follow directions on my phone, and listening for updates from dispatch, I prayed repeatedly, “Lord Jesus Christ, Son of God, have mercy on us sinners.”

Though it felt like an eternity, I arrived on-scene just minutes after leaving my house. Pulling onto the slick and pothole-pocked dirt driveway, flashing lights greeted me. A city fire engine had already arrived, having been nearby when the call went out. Two other firemen from our department were there, the rain having canceled their work for the day. More were coming, along with a paramedic unit. The sound of sobbing met me at the door – the patient’s mother.

Medic 61 arrived. The paramedics made their way off the ambulance and I helped them carry their oversized bag and bulky monitor into the house, down the short narrow hallway.

“In here! Climb over that bed and get ready to relieve him with compressions.” An older fireman had taken command of the scene and was directing what we call “pit crew” CPR, lining up relief after every 200 chest compressions, ensuring little interruption and keeping us all from becoming exhausted too quickly. The room was already crowded, so I crawled over the bed and took my place in line, standing at the foot of the patient.

She was pale bluish, her eyes were partially rolled back, and other less pleasant signs of death had already appeared. Trauma shears threatened more of her dignity, as her clothes were cut away so defibrillator pads and monitor leads could be applied. Compressions continued, then stopped as the defibrillator analyzed.

The next man rotated forward for chest compressions. More breaths given. The paramedics continued to work. The mother wept in the hallway. All continued in suspended time.

From my position now just below the patient’s knees, I saw her right hand flop to the side. The force of the compressions? Perhaps her body was rocked to the side a bit by all the impact? The monitor showed something.

“Stop compressions.” The paramedic spoke loudly, her voice rising above everyone else. “We have a pulse. She’s breathing.” Stunned silence, other than the beeping of the monitor. The paramedic spoke again: “Tracy? Are you with us?” It was the first time I heard the patient’s name.

Things changed rapidly from there. The “patient” was “Tracy” again. Her eyes moved forward. She was lifted from the floor. Her body was covered, her dignity restored and guarded. Her mother’s tears continued, but for a far different reason. “Thank y’all so much! Please tell that man on 911 I didn’t mean to be rude to him.” Firefighters, a notoriously gruff bunch, continued their work with stunned smiles, relieved laughter, and watering eyes. The paramedic said, with shaking voice, “I want each of you to know that I love you. Thank you for your help.” I had never met her before that day.

Tracy was lifted aboard the ambulance and admitted to the hospital for observation. She was discharged and returned home that night.

Dead men are not supposed to rise. God made man, male and female, in His own image, placing them into the Garden, to tend and work it (Gen. 2:7-9, 15-17). He gave them the world, with one prohibition: “You may surely eat of every tree of the garden, but of the tree of the knowledge of good and evil you shall not eat, for in the day that you eat of it you shall surely die.”

The talking serpent came and tempted the woman, leading her to doubt what God had really said. With him, he brought death. Fruit from the forbidden tree was eaten, and man went from working and keeping the garden paradise to being condemned back to the dust from which he was taken (Gen. 3:19).

But, in the midst of that fall, a promise was made. A promise that One would come who would crush the head of the serpent and slay death itself. That One would, to the shock of many, come not as a knight in shining armor, but as a baby – a reminder of life, its delicacy, and beauty. Death – the hideous specter that looms over and threatens us all – with all its indignities and ugliness, would be defeated. Both the death of our physical bodies and the death of our souls (the real specter) would be crushed. Our bodies promised resurrection, our souls promised redemption.

Peter and John did not understand it at first. Seeing the empty tomb, they went back home, “for as yet they did not understand the Scripture, that he must rise from the dead” (20:9). The word “must” is beautiful. Death could not hold Him.

The disciples did not understand. Mary did not understand, but she waited at the tomb. Two angels appeared to her, sitting where Jesus had lain, one at the head and one at the feet, because the empty tomb is the true Ark of the Covenant. When turned back, she saw the “gardener,” and said, “Sir, if you have carried him away, tell me where you have laid him, and I will take him away.”

Then, Jesus spoke her name. “Mary.” And she knew it was the Lord.

God gives glimpses of His victory. We miss most of them, claiming ignorance (“We don’t know what happened to his cancer”) or applying a different label (“It’s resuscitation. They only appeared to be dead”). But, as my friend Cyndi McCallister recently noted, we “sacrifice the best for the bland – and to take something holy and beautiful and make it bland is evil.”

She’s right, and we commit this evil daily. We go through life tripping over blessings – from our homes and families, to our work and relationships. Whether it’s a patient who “comes back,” a child who learns to read, the satisfying tastes of new food, or the comfort of friends and family, we must learn to rejoice in the wonder and mystery of life. Failing to do so is a kind of death in itself. It is a rejection of the life we are being given.

Death is an enemy, but Resurrection changes everything.

*Notes: To protect patient privacy, the privacy of first responders, and comply with HIPAA regulations, names and some other specific details have been omitted and/or changed.
This article is a “throwback” post, but updated in light of the celebration of Easter, 2021.
It also first appeared on htrc.com/blog and is reprinted by permission.