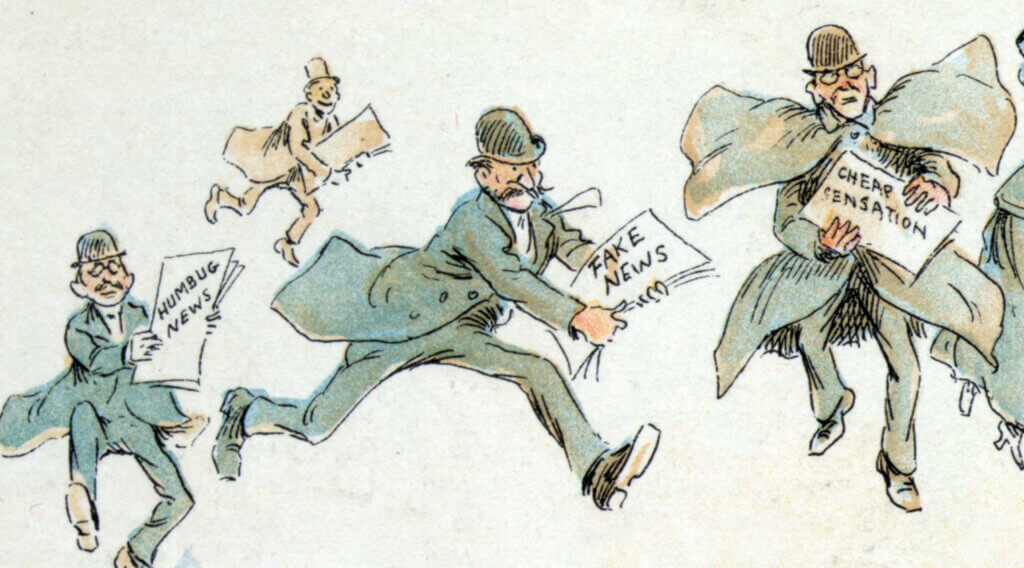 The other night I listened to yet another discussion on NPR about fake news, and someone commented that Americans really need to train high school students “how to think” so they have the tools necessary to identify fake news. Another panelist countered with the suggestion that high school students are already learning “analytical thinking skills,” given that their chemistry and biology classes cover the scientific method. Alas, I am not sure we know how to think about “how to think.”

A colleague and I recently discussed the value of writing research papers, and he suggested that one benefit of teaching high schoolers to scour a library was that they came away with a better appreciation of credible sources. I immediately recalled a senior thesis I read many years ago wherein a student attempted to argue that Christians should not celebrate the Church calendar and most of her arguments rested on a single source, an obscure 19th century Presbyterian minister’s anti-Catholic screed entitled The Two Whores of Babylon, or something like it. The book had been out of print for more than a hundred fifty years, and the young lady writing the paper only had access to it through a pdf which depicted a legendary and threadbare copy. My colleague further remarked, “Given the great onslaught of news which Americans now have to sift through, teaching students to discern better sources seems worthwhile.” I replied in the affirmative.

While teaching the discernment of credible sources is a worthy use of a teacher’s time, I am not content that it is actually a skill. Discernment strikes me more as a prejudice, or a disposition, or a weltanschauung. Teaching students to identify fake news simply seems like too small a goal, for I also want my students to know fake theology when they read it, as well as fake poetry, fake art, fake music, fake arguments and fake epistemology. As a classicist, I do not believe that teaching students to judge one news story more reliable than another will do much good in itself, for the world is full of people who know real news when they see it, but nonetheless respond with banal virtue signaling or aimless hand-wringing. Knowing real news does a man little good when he responds to it with fake feeling.

Every December, I make a big showy point (online and in class) of arguing for December 25th as the actual, factual birthday of Jesus Christ, and I do it with historical arguments, philosophical arguments, theological arguments, and cosmological arguments. Despite this, there is always some brainy skeptic who replies, “But why would shepherds keep watch over their flocks out in the fields in the winter? Don’t you think it would be just a little too cold?” Winter is cold. That’s not fake news. However, as a classical educator, I really want to graduate students who understand that 1800-year-old traditions (and yes, the earliest references to Christ’s birthday on the 25th are that old) are not undone by a single clever question. I would hope that a December 25th-apologist would have an answer to the winter-is-cold objection, but even if there is none, the question is not particularly impressive. It is both reasonable and fair to ask, but it does little to chip away at the credibility of a claim which has been accepted by nearly every Christian intellectual between Augustine and Rousseau. A fair-minded man weighs his oh-so-clever question against the likelihood that others long before him have asked the same question and received a satisfactory answer, and the classicist assumes that the crucible of time is more demanding than the crucible of logic. If some clever objection is raised to an old doctrine (like how Noah’s kangaroos got to Australia after all the other kangaroos died in the Flood) which the classicist has never thought of before, he generally assumes, “I’m sure there’s an answer for that,” and whether or not he finds time to figure out what the answer is does not much matter. For what it’s worth, St. Augustine deals with the kangaroos-on-Australia objection somewhere in the City of God, but if you don’t want to track it down, that’s fine, just know that it’s pretty good.

I refer to this preference for tradition and old things as the classical prejudice, and while it’s significant when weighing historical issues like the date of Christ’s birth, it matters even more when we approach theological disagreements with others. The classically-minded man understands that no old doctrine can be proved or debunked with a single verse from the Bible. The Catholic doctrine of Purgatory may be all wrong, but it is not debunked simply because Christ told the thief crucified beside Him, “Today you will be with me in paradise.” The Calvinist doctrine of predestination may be right, but it is not proved simply because St. Paul used the word “predestination” a few times in his epistles. The classically-minded man assumes his theological and philosophical opponents are familiar with passages of Scripture which seem to suggest otherwise, especially when the doctrines in question are hundreds of years old, for no doctrine achieves such a venerable age without an elegant explanation, even if it is ultimately incorrect. The classical Calvinist does not quote Romans 9:16 to Arminians as though they have never heard it before, precisely because he does not want classical Arminians quoting 1 Timothy 2:4 to him as though he never heard it. The aforementioned passages of Scripture do not, by themselves, prove any doctrine right or wrong, for a doctrine does not have a one-to-one correlation with a single verse. A doctrine is an expansive constellation of Scriptural passages which are connected by philosophical claims, authoritative precedents, and an intellectual community willing to underwrite the doctrine by living it out.

The classical prejudice is a special kind of respect paid to things which have lasted, but also a certain skepticism that new things will last long— especially new things which claim they will last a very long time. You know quite a bit about your parents, you know quite a bit less about your grandparents, and less than 1 in 10 of my students can name even one of their great grandparents, let alone provide any salient details about their lives. Our knowledge of the past fades that quickly. The demands of the present (food, money, family) are simply too overwhelming and too batholithic to reserve much care or intrigue for the past, even when the past in question is our own family. If we cannot be bothered to remember our own great-grandparents, we should be properly impressed by anything which has lasted for more than a millennium.

Of course, the classical prejudice cannot be taught as a skill, but slowly accumulates about the heart of a student over many years. While the classical prejudice might be described and defended from a purely rational standpoint, there is obviously something spiritual about the reverence inspired by Homer, Sophocles, and Virgil. In this, the classical prejudice is not simply “analytical thinking skills,” though it is my wager that classicists are better at discerning not only fake news, but fake philosophy, fake piety, fake outrage, and fake religion, as well.