All the Places to Love

Thank God for an eternal place, of which these barns and hills are but dim reflections, and thank God for “children’s books” that ever so gently help us face the grownup issues of our world 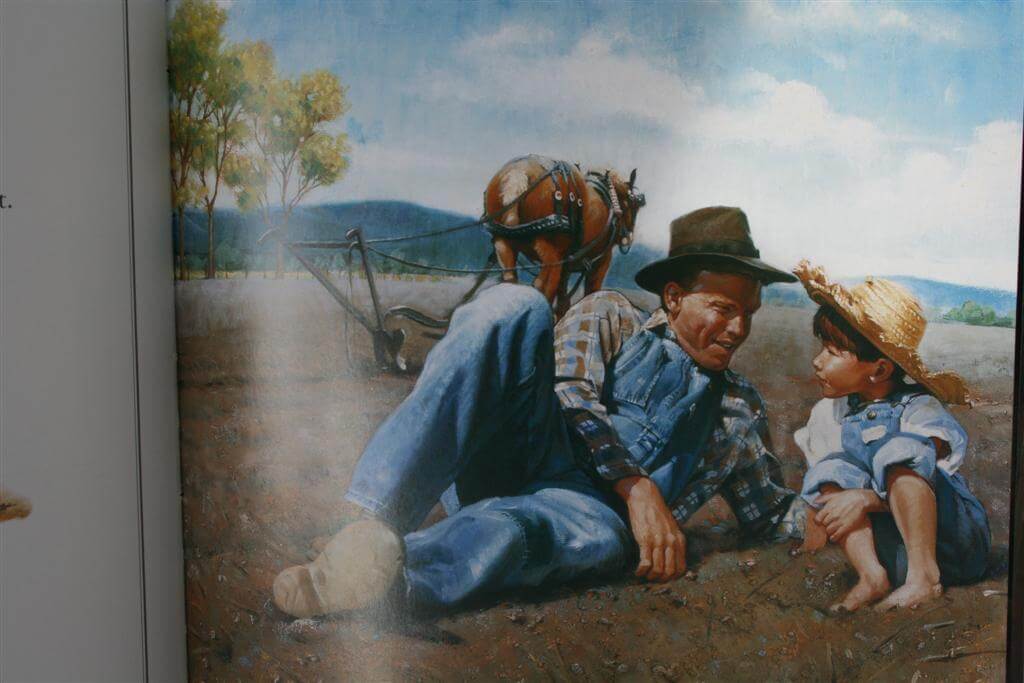 A framed poster of the cover art from Patricia MacLachlan’s All the Places to Love hangs on a wall in my house, and there is a signed copy of the story on my desk. It is one of my favorites. We live on a hill in a rural area just like the family in the story, and I love my home place just like they do.

MacLachlan’s warm imagery weaves themes of home and family together to create an atmosphere of safety, peace and comfort. Breathtaking oil paintings by Mike Wimmer support and even surpass the text in echoing these themes. All the Places to Love presents a feast for the eyes, ears, and heart that can nourish any child. Small wonder that the story is lauded as a classic work of children’s literature.

Books like All the Places to Love make me wonder, though, whether the label “children’s literature” is properly understood. I know that when I recommend such titles to older students or to adults, they often misunderstand the recommendation, assuming that I mean “you should read this to your children.” Indeed, it is often worse than that. Many readers discount children’s literature completely, as if the label meant “written by children” instead of “written for children.” The truth is, however, that even this last definition misleads. Children’s literature is written for readers, including children. The grown-ups who wrote it did not consider it beneath them; good readers of all ages will surely agree.

All the Places to Love provides a good example of this idea; here, MacLachlan has created as profound a meditation on the universal questions of life as any artist of any genre, no matter how old their intended audience.

On the first page of the story, the protagonist, a young boy named Eli, describes his family history and his own place in it by remembering how his loved ones welcomed him into the world: “On the day I was born,” he says, “my grandmother wrapped me in a blanket made from the wool of her sheep…and my grandfather cried.”

The flashback takes up most of the story, continuing up through a jarring sentence on page 21: “Today we wait.”

What for? We find out in a poignant reprise of the story’s first lines, as Eli’s grandmother wraps his new baby sister “in a blanket made from the wool of her sheep, and my grandfather cries.”

Eli vows that he will welcome his sister Sylvie into the family in the style of his own initiation, passing on their lore of home and place, and that he will love her the way that he has been loved. We come to the story’s end reassured that both that lore and that love will endure.

Yet there is a deeper current of doubt running beneath these details that give the warm imagery of initiation its poignancy. We see it most clearly when Eli’s father takes the boy to the fields. “Papa put a handful of dirt in his pocket,” Eli says. It comes up again when grandfather carves Eli’s name on a beam in his barn, “beside his name, and Grandmother’s name, and names of my papa and mama,” and repeats the process for Sylvie at the story’s end. It even resonates faintly in Eli’s own plan to pass on the secrets of his family to his little sister.

These scenes depict the universal struggle to hold onto something permanent and the quest to make a lasting mark on a world that is passing away. It is the fight against the anxiety of an uncertain future. It is the fear of death.

Eli admits it too, though he is only parroting the wisdom of his elders: “Someday I might live in the city. Someday I might live by the sea…but all the places to love are here, no matter where you may live.” Despite the questionable nature of this world, he says, I am going to exert myself to establish permanence – to remember my family, to ground myself in place, to create something that will remain of us in the face of oblivion. Who does not share his uncertainty, or his plan to conquer it?

Patricia MacLachlan’s story reminds me, as I sit here, of two contradictory implications: The uses of this world are sweet indeed, and bitter, too

My house sits on a hill overlooking a valley much like the one on the penultimate page of All the Places to Love. It has been the only home some of my kids have ever known, and I harbor many of the same hopes as Eli does for its future. Behind it lies a pile of stones, gathered there by a farmer from a bygone age, who must have cleared this land and lived here. I do not know his name – county records do not reveal it. Nothing of his house remains, either; as far as anyone knows, my house is the first ever to be built on this place.

I wonder if that farmer, in piling those stones, ever put a handful of dirt in his pocket? I wonder if he ever tried to create a place that would give him and his family an identity, durable in the face of death? I wonder if he passed a culture on to his son and daughter, and they took it to the city with them, or to the sea?

I will never know, but his hilltop is now the seat of All My Places to Love. Patricia MacLachlan’s story reminds me, as I sit here, of two contradictory implications: The uses of this world are sweet indeed, and bitter, too. Perhaps the one creates the other?

Thank God for an eternal place, of which these barns and hills are but dim reflections, and thank God for “children’s books” that ever so gently help us face the grownup issues of our world.