About Beauty And The Beast 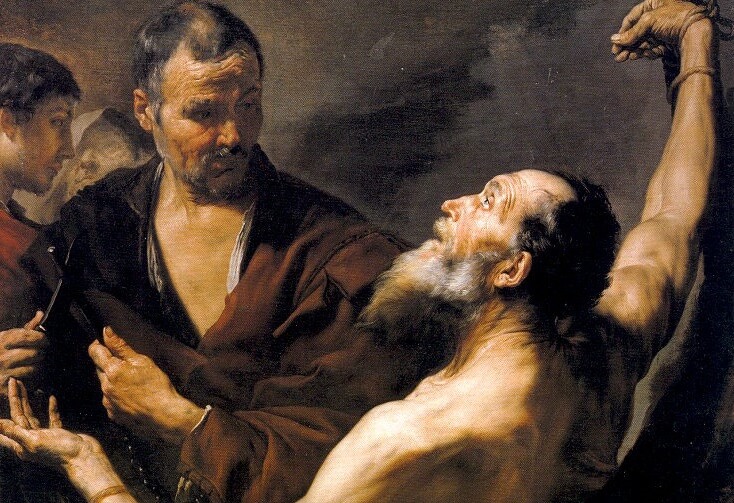 Taken from “Blasphemers,” available in full on request.

When I was twelve years old, my father and mother took me to see a criminal get suspended over six starving jackals, then slowly lowered as they tore him apart. My father was a provincial governor and dutifully made public appearances at such shows, but cursed their vulgarity in private. The morning of my first attendance, we all fasted from our usual meal. On occasions when my father entertained guests from the capital, I would sometimes hear of these shows and the thousands who attended them, the deafening roar of the crowd as men and women were piously eviscerated. My father’s guests were generally of the opinion that the shows were quite terrible, but the empire was in desperate straits and something must be done to appease the gods who were daily blasphemed by the ignorant and superstitious.

As a little child, I had seen a few prodigious things and assumed the bloody shows would produce similar feelings as those wonders, so I was willing to skip a meal for it. Once, while jingling a few silver coins in my hand in the market, a filthy man asked me if I wanted to see something portentous and I said I did. He took me into a dark alley, pulled back the top of his cloak and revealed he had six fat teats on his belly, just like a pig. He looked over his shoulder, then his face approached mine and he whispered, “The empire will soon fall!” and then he ran as though chased. I didn’t know what it would mean if the empire fell, though I assumed it meant I would become a soldier and get tied to the mast of a ship and listen to sirens. For years to come, I innocently thought of the fall of the empire with a deep sense of yearning.

You may think I was naïve to imagine seeing an execution would tease out that same longing, but you would be wrong.

Living in Tusculum, some twenty kilometers from the capital, our largest theater sat no more than two hundred people, and on the day in question, less than a quarter of the seats were filled. On a trip I had once taken to the capital, I saw the vacant Coliseum and thus, when thinking of the Tusculum Coliseum, imagined being at a great distance from the condemned as they were torn apart. Sitting in our little theater, though, I was half a stone’s throw from the condemned men and could clearly make out the features of their faces.

My father was displeased and remarked to my mother, “What good does it make to put in a public appearance when the public does not come?” My mother appeared dire and did not respond to my father’s disappointment. A clown juggled three dead rats for a little while and a few in the audience called out bawdy jokes, then the two accused were led out, but kept at bay.

One wore a mild and bored expression, sometimes raising his eyes to the heavens as though incredulous of the clown and perhaps the entire spectacle in which he was about to play a part. The other man had been badly beaten and shook like a wheel ready to come off a chariot.

Finally the clown was called off and a lawyer dress in white elegantly walked out to the center of the theater and began to read out the crimes of the accused. The bruised man burst out, in the middle of the accusations, “I recant! I recant! I worship Jupiter! I deny Christ!” The man in white nodded and several centurions unshackled the bruised one and led him out of the theater. The other accused was calm, said nothing, and only looked at his feet while the first man departed the theater.

“Staged,” said my father with chagrin.

“What?” asked my mother.

“They stage these little shows. The first accused man is nothing more than an actor, typically a drunk who is paid to recant of blasphemies he didn’t commit. That first bungler was no Nazarene. It was all to add anxiety to the second man, who is truly guilty. The second man is more likely to recant if he’s just seen another of his kind recant. Or so it is thought. But the criminals are wiser than that. I don’t know why we persist with these pathetic dramas. There are probably ten Nazarenes in the audience now whose impiety only grows when they watch our failed, amateur ploys to break their spirits.”

The man in white continued reading out the crimes of the remaining man, who refused to worship Jupiter and was a known worshipper of the Christ. While the man in white read with great verve, the guilty man spoke dully and evenly after each series of accusations, “No, I won’t recant. The gods are meaningless. Only the Christ. Only the Christ.” I thought a man defending the honor of a worthless cause would not speak so dispassionately, though apparently I was wrong. At last, a centurion carried out a tripod and set upon it an icon of Jupiter which was covered in semi-transparent gauze. A slave added a tiny black pot of smoking coals before it and then handed the accused man a small sachet of incense, which the accused accepted with a bemused look.

“Sir,” said the man in white, “you appear of sound mind and body and these good people do not wish to see a dignified creature such as yourself disemboweled by the teeth of beasts. We ask a pittance of you. The immeasurable cosmos precariously teeters upon the cracking bricks of common souls like yourself, and while soldiers risk their lives far from their families to restore order and peace, all the empire requires of you is a token of your gratitude that the divine Jupiter cares for his people so deeply.

If you will but deposit the incense into the fire and venerate the icon of Jupiter, we will refresh you with a draught of fine wine and send you on your way.”

As the lawyer said these words, two slaves carried out a small stool and set on it a pitcher of wine and a small clay cup. The lawyer carried on, “If you so desire, you may even return to your worship of the Nazarene this very day and credit him with the soundness of mind he granted you to do what is surely and obviously reasonable.”

The condemned man sighed, “I will do nothing of the kind.”

The man in white sighed, as well.

The lawyer tried another tactic.

“Sir, I am studied in the doctrines of the Nazarene sect and I know that your people do not deny the existence of the gods, but affirm their reality and even fear them. You are not impious like the old Greek Philosopher. Might you not acknowledge that Jupiter is the creation of your God, even as you yourself are a creation of your God? Did the Nazarene not tell you to pay your taxes? Caesar requires a few coins, Jupiter requires but a few nubs of cinnamon. Is this not reasonable? Is Jupiter less real than Caesar, and yet you pay your taxes.”

The accused man paused longer to contemplate this, but looked to the crowd where a handful of spectators raised their right hands and crossed their index fingers over their middle fingers.

“You are free, sir, to think whatever thoughts you like as you offer the incense. Do you see how the icon is partially covered? Do you see how the visage of the figure beneath the gauze is indistinct? Perhaps an icon of the Christ sits beneath the gauze. Perhaps the Christ will work a miracle and it will become His icon the moment you drop the incense into the fire pot. Or tell yourself whatever you like about the meaning of the incense. Tell yourself whatever—”

The accused man smiled at this, shook his head and laughed. Undeterred, and still thinking on the heavy bonus he would receive if successful, the lawyer motioned for a slave to approach the icon of Jupiter. The slave held a sachet of incense over the fire pot but did not drop it in.

“But,” said the lawyer, “the incense is so small, it hardly even exists. It is barely real. How could you trade your life, and all the good you might do, for a bit of fragrant dust?”

Having lost himself a heavy commission, the lawyer collected himself and walked out of the theater in frustration.

The condemned man was then strapped into a metal harness and led up a high scaffolding. As he gazed into the sky, his face was suddenly illuminated like the thick surface of a lake reflecting the morning sun. A few in the crowd murmured, and my father said absently, “I’ve heard of this…”