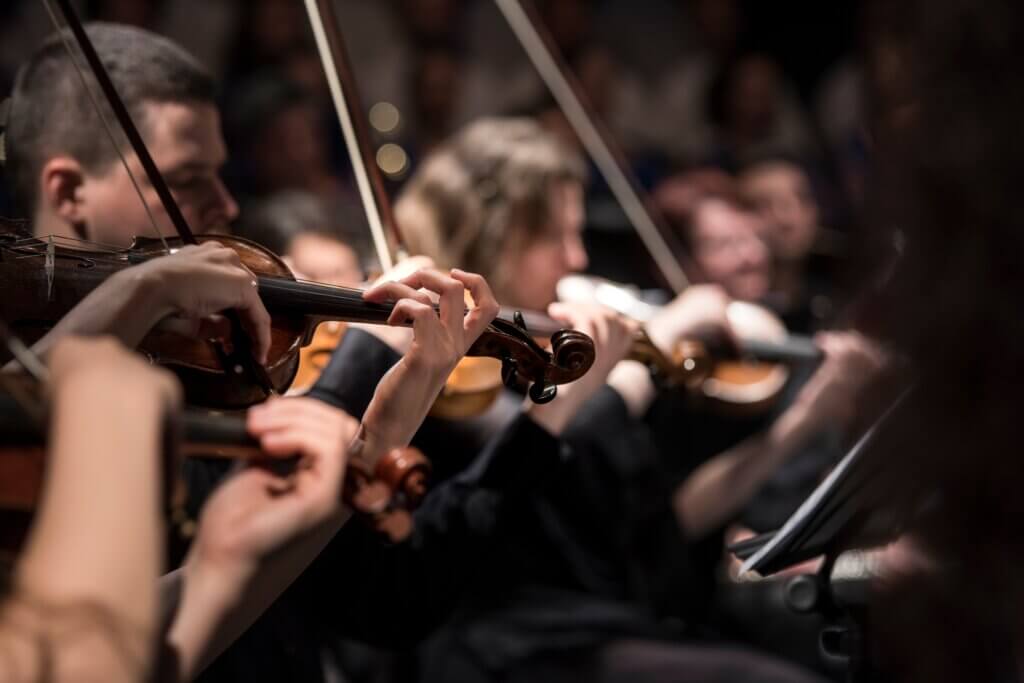 A maze of mismatched tables and chairs hosts a dozen simultaneous conversations. Some folks hunch forward, both elbows on the table, in fervent discussion; others lean back in the chairs, the better to illustrate their talk with expansive gesturing. On the tabletops, in hands, and (every now and again) spilled out onto the floor are cups of strong brown brew, wafting their steam and scent throughout the coffeehouse. And wedged in the corner, content and well-caffeinated, some musicians are plucking and strumming and crooning away.

It sounds like the archetypal hipster coffee shop, doesn’t it? But it could just as easily be the 18th-century establishment of Gottfried Zimmerman in Leipzig, Germany, where the music-loving students and friends of Johann Sebastian Bach gathered to play favorite old tunes and experiment with new ones.

If the parallel between crooning hipsters and Bach’s chamber music strikes you as strange—well, perhaps it is. But it also testifies to our mistaken contemporary assumptions about “classical music.” Wouldn’t it seem strange, for instance, to see an orchestra in a symphony hall standing up, even pacing the stage a bit, while playing Bach and Vivaldi? Or to watch a conductor adding instruments and parts to an established work in the classical canon?

I recently attended a symphony concert in which conductor Jeannette Sorrell, a leading musician and director of early music, did these very things, summoning astonishingly fresh vigor from pieces I knew well. She reminded us in the audience that, in fact, these seemingly unconventional practices are more true to the way these pieces were originally written and performed—indeed, to the way that music itself used to be understood. Learning about this older understanding, and hearing the performance of musicians who have recaptured it, can be one step in rehabilitating our appreciation for the great heritage of music we have received, yet know so little.

Here is Jeanette Sorrell, conducting (from the harpsichord) her ensemble Apollo’s Fire in a fresh arrangement of Antonio Vivaldi’s “La Follia” on period instruments:

Antonio Vivaldi (1678-1741) is one of the greats of classical music. But in that sentences lies a first mistaken assumption about classical music: most of it is not, technically, classical. We use the word “classical” to refer to a genre of music, contrasted with pop, folk, rock, and so on. But more specifically, “classical” is not a genre, but a period, whose music is marked by characteristic formal and stylistic elements. Roughly, the periods of music are similar to those of literature: Medieval (1150-1400), Renaissance (1400-1600), Baroque (1600-1750), Classical (1750-1830), Romantic (1830-1920), Twentieth Century (1920-1970). Each period, of course, has its own different stages and streams. But for now, suffice it to say that, strictly speaking, Vivaldi is not classical but Baroque, a near-contemporary of Bach and Handel.

In an age of prolific composers, Vivaldi held his own. His works include five hundred concertos, sixty-four solo sonatas, thirty-eight cantatas, twenty-seven trio sonatas, twenty-one operas, and sixty sacred vocal pieces. “La Follia” is one of the trio sonatas, or pieces composed for two violins and one or more continuo musicians, often a harpsichordist and cellist. This piece exposes a second common misunderstanding: classical music is not cloistered away from the music that people make, sing, and whistle in their everyday lives.

“La Follia” is actually the name of a folk tune traced back to fifteenth-century Portugal. Literally meaning “folly” or “madness,” the tune was used for rambunctious country dancing. But it was eventually noticed by composers who began to play with it, eventually forming a playful tradition of writing variations on the original tune. In Vivaldi’s day, the most famous set of variations was by Arcangelo Corelli; composers after Vivaldi who have written their own variations include Romantic composer Franz List and twentieth-century composer Sergei Rachmaninoff.

All of this versatility served the double function of allowing the music to be enjoyed by more audiences, and also providing scope for composers’ and performers’ unique creative energies and visions.

Thus, though it may sound formal to our ears, “La Follia” would have sounded playful and boisterous to its original audience. The Apollo’s Fire musicians capture some of this spirit, I think, in their lively, free movement, which is not the norm for today’s orchestra musicians. They also play with the music in other ways: though it was originally written for two violins and continuo, you’ll notice that more musicians have been invited to the jam session in Sorrell’s rendition. Indeed, the conductor turned the piece from a trio sonata into a concerto grosso—a work in which a trio sonata is reinforced by and put in conversation with a larger ensemble group, opening the possibility for more layers of melody, harmony, and interpretation.

And that leads to a third problem in our conception of classical music: we wrongly think of it as something sacred, roped off like a museum exhibit, not to be tampered with. But this attitude is absurdly contrary to the circumstances of its original composition and performance.

Almost all of Vivaldi’s music, like that of his fellow Baroque composers, was occasional, or written for particular events. Vivaldi was employed by the Pio Ospedale Della Pieta—one of four Italian orphanages in which the boys were trained as apprentices and the girls as musicians, an unlikely but effective fundraising asset and preparation for marriage. Most of his pieces were written for the various public and private concerts given by Pieta musicians, just as most of Bach’s works were written for specific church services throughout the liturgical year, and Handel’s for events in the royal court and civic life. This music, far from being removed from life, helped to weave its very fabric.

And, because of this, it was not at all considered a sacred, unalterable artifact. It was necessarily and gloriously improvisatory. Music was written for the specific number, type, abilities, and personalities of the musicians the composer had available, whom he knew and worked with regularly. If a piece were to be performed again later, or if a different composer wanted to try it elsewhere, it would be altered to fit the specific circumstances of the new time and place. Add a few violinists, take out that section written for last year’s flute virtuoso that no one can play anymore, shorten it a bit to fit the time constraints of this year’s event—this was the way that music was treated. Furthermore, the music was never completely written out: the continuo musicians mentioned earlier played from a basso continuo, or base line, in which only the basic melodic line was written out; the musicians were expected to improvise chords and melodic decorations to complete it. All of this versatility served the double function of allowing the music to be enjoyed by more audiences, and also providing scope for composers’ and performers’ unique creative energies and visions.

If we can begin to listen to “classical” music with this understanding, perhaps we’ll begin to hear the pulsing, entrancing vitality that its first audiences did. And just perhaps, we’ll begin to understand and to make music the way they did—as a part of daily life, lending it dignity and joy, beckoning us to fresh insights and imagination.