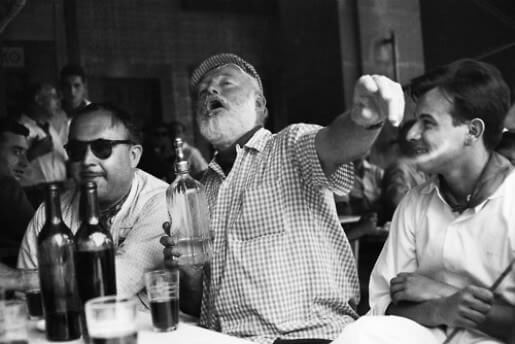 Many classical Christian schools have literature programs which progress chronologically, and so as students progress through high school, they are taught evermore lately written books. By the time senior year rolls around, the student is often reading books written within the lifetime of his grandparents.

1. No writer from the 20th century has produced a classic because no 20th century writer is old enough to be canonized. This means that 20th century literature is taught from a fundamentally different perspective than everything else in the classical curriculum. Up through 11th grade, the teacher hands out the next book in the curriculum and says, “This is canonized. It is not up for dispute. It is not up for critique. This book is older than us, wiser than us. It has made us. We have not made it. Sit at the feet of this book and learn.” This cannot be said of Hemingway, Steinbeck, Kafka. Hemingway is great and all, but we are not obligated to read Hemingway. We are obligated to read Homer and Plato and Aeschylus, though. Hemingway might not be read in another hundred years. A future wherein Hemingway is not read would be an okay future to live in. A future wherein Plato was not read would not be an okay future to live in.

3. Senior year is the most stressful year of high school. Theses to write. College applications to send in. Grants and scholarships to apply for. When students are at their highest moment of stress, why inundate them with morbid literature written by sad, confused unbelievers? Besides, it is cruel to make someone read Hemingway before he is old enough to drink.

4. If the students are truly receiving a classical education, by the time they reach their senior year, they are in a position to be more influenced by what they read than any previous year. Their souls will be dilated, their minds aflame, their intellects more capable of contemplating virtue. Having achieved such openness and malleability, why give them the worst literature of their high school careers? Having readied them to receive the knowledge of virtue with greatest clarity, why give them literature which is philosophically defunct and contains no character worthy of emulation? No matter how humane John Steinbeck was, there is no Roland in The Grapes of Wrath. There is no Jane Eyre in A Farewell to Arms.

5. It will be argued to the contrary, “Well, they’re going to read that literature next year at Babylon U. Might as well get them comfortable with it now.” Such claims are manifestly opposed to the spirit of classicism. The best way to prepare for reading depressing, corrupted literature is not to read depressing, corrupted literature. A classical education is not about slowly building up an immunity to Iocane power. The best way to prepare to read Hemingway and Kafka in college is to read Plato and Solomon in high school.

6. Classicism rejects chronological snobbery. However, to teach 20th century literature to seniors merely because “they’ve worked their way up to 20th century literature” is to reason like a progressivist. If the seniors have not read Aristotle or Aeschylus, why not read them senior year? The reply comes, “Because Aristotle and Aeschylus are ancient writers, and they have already taken Ancient Literature as sophomores.” This claim solves nothing, proves nothing, assumes everything. If a man has not read Aeschylus, he has not exactly “taken Ancient Literature.” If the goal of a classical school is to give a survey of literature, why not throw some pulp novels, 50s sci-fi, Garfield comic strips and transcripts of the Howard Stern show into the mix? Classical curriculums are not surveys of anything. The ten books which comprise your “Medieval curriculum” are not in place to give the student “a feel for Medieval literature.” Who cares about “getting a feel” for anything? Classical education has never given priority, weight or importance for “getting a feel” for this or that. We teach Boethius because Boethius was righteous and saw God clearly. We teach Boethius because ad fontes. Boethius is worth reading, worth being taught whether a school has “a Medieval literature” class or not. If your seniors have not read Boethius, don’t waste their time reading Hemingway just because “chronologically speaking, Hemingway comes next.” A pox on the house of “chronologically speaking.”

7. Generally speaking, I have not found students really enjoy 20th century literature. I teach Kafka and I teach art history classes, as well, and toward the end of the year, we look at Jackson Pollock and Paul Klee for a minute or two. When I announce that we are going to read Kafka’s Metamorphosis, or when I announce, “Next class, we’ll spend some time looking at the paintings of Jackson Pollock,” or whenever I tell a class that we are about to discuss something Avant-garde, at least one student will say something like:

Yes! Kafka’s Metamorphosis is crazy. Do you know what it’s about? It’s about a guy who wakes up one morning and he’s a bug. Isn’t that crazy? And it’s an actual book that people read. None of those doilies and tea cups and Mr. Darcys! A guy wakes up as an actual bug! That’s so random! That’s so awesome!

And then about five pages into the Metamorphosis, everyone is bored to death because the book is terrible, inhuman gibberish.

Giving students the most recent stuff last creates the false impression that artists like John Cage and Jackson Pollock and Franz Kafka require a greater intellect to understand than Augustine or Plato, which is simply not true. Because Augustine is more righteous than Kafka, Augustine requires a more refined intellect to understand than Kafka requires, because righteousness is interesting and sin is stupid.

I would not pretend this is a full summary of all the issues, good and bad, which attend the teaching of 20th century literature. However, classical teachers ought to be aware of the fundamental differences between 20th century literature and classical literature. There are ways for a teacher to negotiate the spiritual hazards of Hemingway and Steinbeck and Kafka, the first of which has to do with how such literature is presented. I do not believe a teacher could put A Farewell To Arms in the hands of a seventeen year old boy without a rather severe dressing down of the book itself, not to mention some comment on the nature of classical education and why Farewell is not a classic at all. A good teacher simply should not, in good conscience, vouch for 20th century literature in the same way he vouches for Augustine, Burke, or even Rousseau for that matter. Whether Rousseau was wrong or not has little to do with the fact that he is one of our fathers. Steinbeck is not.