The Wizard of Oz and the Removal of Chests 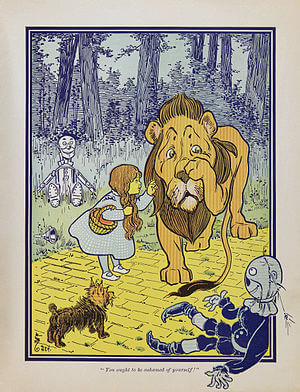 The Wizard of Oz seems to be a fine movie from all I can tell, but the book strikes me as exactly the sort of thing that CS Lewis was talking about when he spoke of making “men without chests.”

Chapter XXI is called “The Lion Becomes the King of the Beasts.” After seeing the wizard and being given courage, the lion arrives, with the Woodman, the Scarecrow, Dorothy, and Toto at a forest that the Scarecrow finds gloomy but the lion finds “perfectly delightful.”

“I should like to live here all my life,” he says. See how soft he dried leaves are under your feet and how rich and green the moss is that clings to these old trees. Surely no wild beast could wish a pleasanter home.”

Leaving aside the question of whether a lion who has just received a chest (courage) would even notice a home with soft dried leaves underfoot and the nostalgic moss clinging to old trees rather than an opportunity to show off its newly gained courage, I proceed to tell you that, in spite of the fact that “no wild beast could wish a pleasanter home,” they don’t see any.

The next day, however, they resume their journey and soon hear a “low rumble, as of the growling of many wild animals.” (Baum seems to do this a lot: raise a problem that ends up not mattering, that demands nothing of the characters but the passing of time, that has nothing more than an accidental significance if any at all.)

And indeed the animals have gathered in a clearing where they came across hundreds of beasts in council. He quickly determines that they are in great trouble. But when he appears, the assembly falls silent and a tiger approaches him.

“Welcome, O King of Beasts, you have come in good time to fight our enemy and bring peace to all the animals of the forest once more.”

When he asks what their trouble is, the tiger tells him that they are threatened by a fierce spider-like monster, as big as an elephant, with eight legs as big as tree trunks. It has eaten every other lion in the forest, but none of them had been “nearly so large and brave as you.”

Then the newly brave lion asks, “If I put an end to your enemy, will you bow down to me and obey me as King of the Forest?” When they gladly agree, he heads off to “fight” the great monster.

“He bade his friends good-bye and marched proudly away to do battle with the enemy.”

In all the foregoing, I admire some of Baum’s story-telling tactics, though he is no Grimm. I have problems, but most of them can probably be responded to. But in the last paragraph of the chapter, he describes this battle, and I will tell you right now, I think it is badly done, and I think Baum betrays a harmful frivolousness that reminds me of Lewis’s opening words in Abolition: “We are not attentive enough to the importance of elementary text books.”

The great spider was lying asleep when the Lion found him, and it looked so ugly that its foe turned up his nose in disgust. Its legs were quite as long as the tiger had said, and its body covered with coarse black hair. It had a great mouth, but its head was joined to the pudgy body by a neck as slender as a wasp’s waist. This gave the Lion a hint of the best way to attack the creature, and as he knew it was easier to fight it asleep than awake, he gave a great spring and landed directly upon the monster’s back. Then, with one blow of his heavy paw, all armed with sharp claws, he knocked the spider’s head from its body. Jumping down, he watched it until the long legs stopped wiggling, when he knew it was quite dead.

The Lion went back to the opening where the beasts of the forest were waiting for him and said proudly, “You need fear your enemy no longer.”

Then the beasts bowed to the Lion as their King, and he promised to come back and rule over them as soon as Dorothy was safely on her way to Kansas.

Compare this “battle” with any other encounter in any other fairy tale or folk tale or fable and see if you can justify it.

The Lion is practical, he achieves his end. But he is not courageous, he is not noble, he is not worthy of a story for the simple reason that nothing worth learning about him or about virtue was displayed. It is not fitting to the world of fairy tales or children’s literature to read about such a conquest. We have had one more piece of our chests removed by reading and not resisting this story.

Give me Reepicheep, whom I can welcome into my soul with joy.